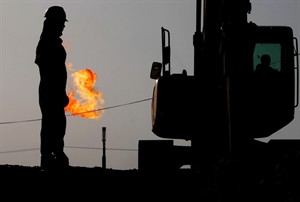 Canada is right “up there” regarding heavy oil and bitumen reserves. The Orinoco belt in Venezuela contains an estimated 297 billion barrels of oil, larger than in the deserts of Saudi Arabia, which contain 265 billion barrels. Canada’s tarsands come in third at 170 billion barrels.

And there’s great demand for oil. The US economy consumes 20% of the world’s oil and, like China, it depends on imports. It’s therefore no surprise that being next to the huge US oil market, Canada is one of a handful of oil-and-gas -exporting countries, along with Venezuela, Saudi Arabia and Russia, which exports one-half of the natural gas Europe uses.

Rising consumption, but mostly rising prices, has made the value of this oil market mushroom. Consumption went from 76 million barrels of oil per day in 2000 to 87 million barrels a day in 2010. But the price per barrel went up from $28 to $80 in this decade. The annual fuel bill quadrupled from $791 billion to $2.5 trillion and we are now collectively spending more than $3 trillion yearly on oil, which isn’t sustainable and will continue to trigger recessions.

Harper’s favouring a shift of oil exports from the stalled US economy to the still booming Chinese economy is not unique. Saudi Arabia has been shifting its oil exports and according to Rubin “half its crude exports now go to China” and this market has “surpassed the US as the kingdom’s largest customer.”

Harper’s rise to power, and the political realignment taking Canada much further to the right, comes in large part from the global shift in the oil market. The shift of the US to more dependence on Alberta’s tarsands occurred because of the greater security of supply arising from free-trade with the US’s northern NATO ally. When you add in the military costs of waging oil-related wars in the Middle East, the US has experienced a double whammy from the shock of steadily rising oil prices. Its national debt is skyrocketing out of control.

Yet, just as the continental energy corridor envisaged during the Mulroney era is taking shape, Canada, under Harper, seems ready to follow the path of Saudi Arabia. It may be purely coincidental that the Harper government is now distancing itself from America, including incessantly broadcasting a nationalistic and militaristic TV “ad” celebrating the British victory over the US in the War of 1812, which erroneously implies that this was a Canadian military victory before our country even existed. Is this Harper’s way of forging honour through a blood soaked flag?

Harper’s Conservatives have worked tirelessly with both oil-importing economic superpowers, the US and China, to undermine a carbon-cutting international agreement. China has refused to accept hard targets for absolute carbon emissions because such capping would curtail its rate of economic growth. Harper claims he opposed a post-Kyoto climate agreement because China disagreed with such binding targets, such as Canada initially agreed to under the Kyoto Accord. But this was always about stalling and managing public perception. Harper doesn’t want any binding targets for China or the US because these would interfere with their rate of growth and undermine the lucrative global oil-export market. This is the only bottom line!

Harper has steadily shifted to the narrative that Canada’s best interests are in unfettered economic growth based on oil-exports. It’s a crude, somewhat compelling and yet dangerous view of nation-building. He’d like Canadians to forget that since 1990, the base year for the Kyoto Accord, Canada’s carbon emissions have gone up over 30%; rather than being reduced by 6% by 2012, as previously agreed. Harper seems totally unconcerned about Canada’s loss of international reputation; he pulled out of Kyoto rather than pay up for emission credits from other countries who had worked in good faith to meet the treaty’s objectives. Harper’s “Canada” is already acting like a rogue Petro State that cares only for its oil sales.

Harper’s “energy superpower” will not automatically come from the market he seems to worship. In addition to undercutting climate change agreements, he’s maintained subsidies which favour this industry. While the US justifies its huge tax breaks to Big Oil as a way to promote energy self-sufficiency, Canada justifies the $1.4 billion yearly subsidy to protect our number 1 export. It’s a vicious circle designed to ensure the viability of the lucrative oil export industry. There is no level playing field for sustainable energy.

We need to quickly demystify all the deceptive hype about economic growth. Economists calculate economic growth based on productivity and labour force. If productivity goes up 2% and labour force growth goes up 1% then they say it’s reasonable to expect a 3% growth rate. Yet with fairer distribution and more intelligent production we don’t require perpetual growth to meet human needs. And perpetual growth will undermine our most fundamental need, a sustainable environment.

The growth ideology ignores all the vital matters of democracy, justice, peace and sustainability which must be front and centre in good government. China’s unprecedented growth rate of 10% is based on exploited labour and the degradation of air, water and human health. This isn’t sustainable. Using the conventional market model of economic growth which Harper upholds is simply irrational if we are to enhance human rights and environmental sustainability on a global scale.

It’s no accident that Harper’s Conservatives are steadily undercutting parliamentary democracy, freedom of information, due process, and scientific inquiry while increasing the politics of “attack ads”, scapegoating and retribution. Despite all the rhetoric about small business, free enterprise and rural community they favour a one-dimensional, not an open society.

As we become more dependent on oil exports we will also become a more authoritarian society. No wonder that we are starting to feel a little more like Putin’s Russia, or even socially conservative Saudi Arabia, where the oil economy that keep the rich wealthy, always trumps democracy and human rights.

Remaking Canada along the simplistic lines envisaged by Harper is like pounding big square pegs into small round holes, which requires a lot of force and lots of collateral damage. Tying Canada’s economy to exporting oil to fuel China’s economic growth disregards human rights and ecological blowback. Deregulating environmental protection and sabotaging international treaties are signs that we already are moving towards an authoritarian Petro State.

We’ll need a much larger vision of human and biospheric common-interest to make the shift from economic growth scenarios that encourage our steady collective demise.
Posted by Next Year Country