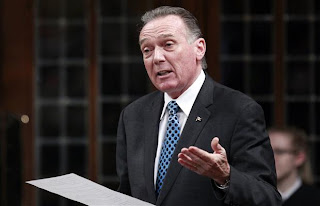 During the press conference that accompanied yesterday’s launch of the 2012 edition of Environment Canada’s “Canada’s Emissions Trends”, Environment Minister Peter Kent claimed the report shows that Canada is now “half way to its target of reducing total greenhouse gas emissions by 17 percent from 2005 levels by 2020.” While Kent went on to claim credit for this purported progress on behalf of the Harper government’s sector-by-sector regulatory approach to greenhouse gas pollution, for most observers it seemed to good too be true, given that the previous year’s installment of the same report indicated that the country had only gone a quarter of its way to that target.

Indeed, a closer read of the report reveals that it is changes in carbon accounting practices rather than actual changes in the federal government’s climate policy that explain most of the difference between this year’s and last year’s numbers. Lower emission numbers on paper are not matched by lower emissions to the atmosphere or any improvements within federal climate policies. In fact, about two thirds of the “progress” claimed by Kent on behalf of his government can be attributed to these changes in accounting. What’s more, more than half of the amount resulting from these dodgy figures would probably trigger an investigation into fraudulent accounting practices, at least in the world of financial accounting.


But don’t take my word for it – let’s have a look at the numbers. At the core of the government’s claim that we are now “half way” to our 2020 target are two projections of emissions for the year 2020. The first estimates how much 2020 emissions would likely be with no policy measures on any level of government taken into consideration (also known as “business-as-usual”, or BAU projection: 850 Mt CO2e[1]). The second projection takes into account the combined effect of all policies and measures that have already been implemented by provincial and federal governments in 2020 – this latter figure was projected to be 785 Mt CO2e in the 2011 installment of “Canada’s Emissions Trends” and is reported as 720 Mt CO2e in this year’s report. Given the government’s Copenhagen target of 17% below 2005 levels, the goal is to emit only 607 Mt CO2e in 2020. When Peter Kent claims to be “half way there”, he is looking at the total distance between the BAU projections for 2020 of 850 Mt and this goal of 607 Mt. In the graphic below, taken from “Emissions Trends”, Kent’s claim corresponds to the “Reductions to Date” section on the right of the graph.

The specific section that we need to look at is the difference in 2020 between the “2011 Trend Line” and the “2012 Trend Line” – about 65 Mt CO2e. It is these 65 Mt that Minister Kent refers to when he says: “Last year, we were one-quarter of the way to our goal. And now we’re half way there. This shows the significant progress we are making.” As I said before, at least two thirds of these 65 Mt CO2e can be attributed to changes in accounting – partly deliberate deception of the Canadian public, partly outright fraudulent accounting scam.

First, the deliberate deception of the public: The 2011 edition of “Emissions Trends” used an estimate of 710 Mt CO2e when reporting Canada’s emissions for 2010. The report used an estimate because actual data did not yet exist. This data has since become available and turned out to be lower than expected: emissions were 692 Mt CO2e, or 18 Mt lower than estimated. In this year’s report, Environment Canada uses this figure in place of the estimate. This is seen quite clearly in the graph above: the two “Trend Lines” start at the same point in 2009 and the next data point is 2010, with a noticeable distance between them. This distance is the 18Mt difference between the old estimate and the actual data. As a result, even if nothing else would have changed in the modeling of the 2020 projections between last year’s and this year’s “Emissions Trends”, the 2020 projections would be lower by at least these 18 Mt CO2e (thus accounting for 28% of the claimed “progress” of 65 Mt CO2e compared with last year’s projections).

Of course, Environment Canada was absolutely doing the right thing when they replaced the wrong numbers with updated ones (and the report actually states upfront, on p .2, that this correction is one of the 4 major reasons for the difference of the 2020 projection). However, the Harper government spins this simple correction of previous accounting inaccuracies into a claim of a “significant progress we are making”. This is disingenuous at best and – when seen in the context of the other number games in this report – more likely a deliberate attempt to mislead the Canadian public on the government’s performance.

Now lets turn to the more sinister issue. Looking at the report, we find for the first time an item “Expected LULUCF Contributions” (LULUCF is UN speak for “Land Use, Land Use Change and Forestry” but for our purposes we can just read it as the “Forestry sector”). These “contributions” are valued at 25 Mt CO2e in 2020 – a significant amount given that the total emission reductions that Steven Harper promised in Copenhagen are a mere 125 Mt CO2e below 2005 levels. These 25 Mt CO2e also account for about 38% of the difference between the projected 2020 emissions in the 2011 and 2012 “Emissions Trends” respectively, in other words they account for 38% of the “progress” that Peter Kent is claiming the Harper government is responsible for.

To understand why this 25 Mt CO2e number can be considered the result of fraudulent accounting we need to leave Canada for a moment and go back to Durban in December 2011 – just over half a year ago. In that place and time, the most recent round of negotiations under the UN Climate Change Convention was taking place. Within the negotiation stream dealing with the rules of the Kyoto Protocol (the accord that Harper would famously abandon the instance the conference was over), Canada’s delegates were hard at work trying to convince the rest of the world of a new approach to account for the CO2 emissions that result from trees being cut down through logging (“Forest Management” or “harvesting” in UN speak). Under this new approach, which ended up being adopted at the conference, countries would agree to country-specific “reference levels” of logging activities for the period 2013-2020. Actual logging during this period would then be compared to these reference levels. In other words, if a country would end up doing more logging than it had said it would, it would have to account for the extra emissions, while on the other hand a country whose logging activities remained below the agreed “reference level” would get credits for the difference in its carbon accounts. Crucially for understanding the scam in the new emissions figures, the Harper government told the world’s countries in Durban that it expected its logging activities in the period 2013 to 2020 to be constant and equal to the average of the historical logging levels between 1990 and 2009. As a result, Canada’s “reference level” for logging was set at that level[2].

Returning to 2012, we find a completely different world – at least on paper: the federal government is now telling us that its “current projections suggest that harvests will remain below the recent average historical level used in estimating the reference level” (page 38). This change, from expecting the 2013-2020 logging to be the same as the 1990-2009 average to suddenly expecting it to be substantially lower is what is behind the 25 Mt CO2e “contribution” of the LULUCF sector. It is important to emphasize that there is no government plan or policy to reduce or limit logging in Canada’s forests nor has there been any meaningful change in the state of the Canadian forestry industry over the half year that separate these two directly opposing expectations of the level of logging activities in 2020.

This is why I believe it is appropriate to speak of fraudulent accounting practices for this segment of Kent’s purported “progress”: the government deliberately used one set of assumptions to set the “reference level” and then arbitrarily switched to another set of assumptions in order to create an impression of “progress” out of thin air. Meanwhile, nothing in the real world has changed. There has been no change in policy and no change in the amount of greenhouse gas pollution in the atmosphere. This is fraudulent accounting because the only possible explanation for this is an attempt to deliberately mislead the Canadian public in the hope that carbon accounting is too complex for most of us to understand. Kent hopes that we won’t see through this scam and we will swallow his government’s spin of alleged progress on climate change.

In the world of finance, if similarly fraudulent accounting tricks would be used to deliberately mislead the public – for example, to keep a company afloat or stock prices high – criminal investigations would, and often do, ensue. Accounting scams that risk a safe climate for future generations are clearly even more objectionable and immoral. Amidst a summer that is poised to become the hottest summer on record in Canada, with climate change impacts being felt across the country, the need for ambitious action to address global warming has never been clearer. Kent’s “creative” accounting will get us nowhere.

Dr. Christian Holz is the Executive Director of Climate Action Network Canada – Réseau action climat Canada (CAN-Rac), a network of over 85 environmental, faith, development, labour, aboriginal, health, and youth organizations committed to making action on climate change by Canada a reality. Prior to joining CAN-Rac he completed his PhD research at the University of Glasgow wherein he closely followed UN climate negotiations and the role of environmental organizations in those negotiations.

[2] The government’s submission to the UN climate convention in preparation for the Durban meeting explains this in detail. Here is the crucial sentence: “Harvest rates are projected to remain at that level [the average level observed for 1990 to 2009] from 2013 to 2020” (page 8, paragraph 30). “Emissions Trends 2012” is also restating that this assumption was, indeed, the basis for Canada’s reference levels: “Canada’s reference level […] was derived by assuming that future harvests in 2013 to 2020 would be the same as the average historical level between 1990 and 2009” (page 37-38).
Posted by Next Year Country