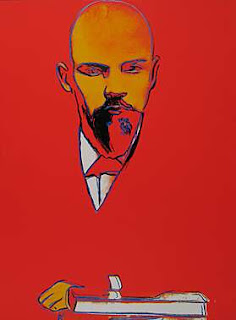 Let us not, however, flatter ourselves overmuch on account of our human victories over nature. For each such victory nature takes its revenge on us. Each victory, it is true, in the first place brings about the results we expected, but in the second and third places it has quite different, unforeseen effects which only too often cancel the first.

- The Part Played by Labour in the Transition from Ape to Man, Engels 1876
Each April 22nd we celebrate Earth Day and Lenin’s birthday.
In what is believed by rational people to be pure coincidence, the first Earth Day April 22,1970 fell on Lenin’s 100th birthday. At the time, the Daughters of the American Revolution said, “subversive elements plan to make American children live in an environment that’s good for them.” Conspiracy theorist J. Edgar Hoover urged the F.B.I. to investigate the mass environmentalist demonstrations.
Even today the Earth Day/Lenin’s birthday convergence is seen as by the extreme right as conspiracy of communists attacking the rights of oil companies and private property. In a sorry attempt at wit, they suggest that Earth Day should be moved to April 20, Hitler’s birthday, because Hitler was more caring about the environment than Lenin. Many mainstream environmentalists find the coincidence vaguely distressing and tend to talk about the disaster at the V.I. Lenin Memorial Chernobyl Nuclear Plant and show photos of pollution in Chinese cities as examples of how fair they are in their views of ecological devastation.

While we agree that the two major socialist experiments of the twentieth century were failures in the area of ecology, we also believe that it’s worthwhile to look briefly at Lenin’s ecological practice in the years before Stalin declared that class struggle had ended in the Soviet Union. It is at least worthy of a paragraph or two. Bearing more resemblance to Theodore Roosevelt than to productivist stereotypes, in 1921 V.I. Lenin signed legislation creating the zapovednik system. This system of forests, national parks, future urban green areas, and designated wilderness remains according to the Massachusetts Audubon Society “the greatest collection of undisturbed natural landscapes on earth.”
But Lenin was dedicated to far more than the preservation of the landscape. He set aside the zapovedniki (roughly translated as nature preserves) not only for conservation but also for the study of ecological processes. The zapovedniki were living laboratories administered by pure scientists observing the natural world without interference or pressure.
Lenin, like Marx and Engels, saw the destructive side of modern agriculture and long distance trade under capitalism. Materialism and a respect for science led him to look deeply into Marxist attempts to understand the natural world and homo sapiens‘s place in it.
In the first volume of Capital, Marx used natural science to look at capitalism’s “irreparable rift in the metabolic interaction” between human beings and the earth. John Bellamy Foster in Marx’s Ecology, describes how this analysis led Marx and Engels to address “deforestation, desertification, climate change, the elimination of deer from the forests, the commodification of species, pollution, industrial wastes, toxic contamination, recycling, the exhaustion of coal mines, disease, overpopulation and the evolution (and co-evolution) of species.”
As socialists, we read Marx and Engels on ecology not simply as a way to dispel stereotypes or correct misquotes and misinterpretations. The Marxist tools of historical materialism and dialectics ground us as they did Lenin. The concrete application of dialectics in ecology leads us towards a deeper understanding of the natural world and its processes. It also identifies the opposite, a science in service of profit that has driven the development of industrial agriculture and which turns nature into a commodity. That is at best short sighted. It ends in our devastation along with many other species. It stands to reason then that a socialist alternative could begin to restore the earth’s ecosystem and establish humanity’s more equitable place within it.
As materialists who believe in our inextricable connection to the natural world and to natural science, we seek common ground with ecologists and other scientists. We believe that we have much to learn and explore together in the struggle to build a restorative future.
And so, as we reflect on Earth Day and Lenin’s birthday, we introduce a few of the theoretic articles we are reading to deepen our understanding and the quality of our discussion of the ecological crisis. We include a glossary. In the coming months we will continue our exploration of ecology and its intersections, in particular with women and children, working class, Latino, Native American, Asian, and African American communities, the economy and war. We are especially interested in the environmental justice movement.
Chapter 15, Section 10 “Modern Industry and Agriculture” in Capital Vol. 1 by Karl Marx

A glossary of ecological terms
Mary Contrary went back back to the land for five years in the 70s, but gave up when she lost the farm. She cares deeply about ecology, family, and socialism and believes they are interconnected.
Posted by Next Year Country