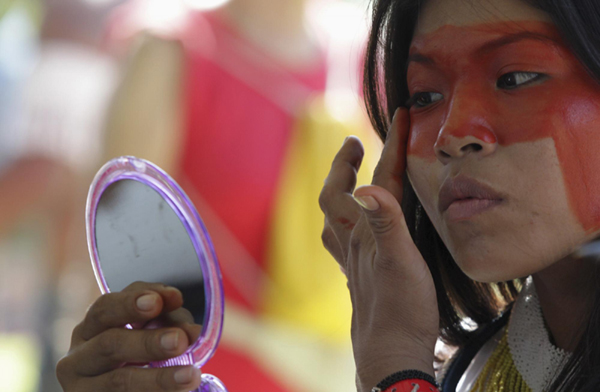 On June 20, anticipating the failure of the United Nations Conference Rio+20, more than 50,000 people took to the streets of Rio de Janeiro, Brazil conjointly with dozens of other demonstrations around the world. These mobilizations demanded from the governments and corporations involved in the official conference, that solutions immediately be put into place to counter climate change and the degradation of the terrestrial environment. But more than the challenge, the great popular march in Rio was celebrating at the same time the holding of the People’s Summit for Social and Environmental Justice, an unprecedented meeting at which notably the policies of extractivist expansion of the governments of Quebec and especially of Canada were decried. For the hundred Quebecers present, it is a matter upon their return of being the bearer of the vision of the Peoples’ Summit and of achieving victories here against these anti-environmental policies, for the sake of our health and that of the rest of humanity. But we will not be doing it alone...

The Quebec and Canadian Plan Nord

The extractivist production model has as its aim the maximum exploitation of elements of Nature that are salable on the world market. Traditionally, what this has referred to is mineral extraction and production of oil, two Canadian "specialties." The extractive industry is based on the dispossession of the common heritage. In Canada, as elsewhere where Canadian extractive industries are at work: environmental tragedies multiply, local and indigenous communities are despoiled, legislation aimed at protecting ecosystems is dismembered, democratic rights of people are enfeebled, and policies of privatization are put into place to benefit the interests of transnationals and the energy and extractive industries.


And everywhere, this path has led to more environmental problems and to less immediate emphasis on the necessary solutions to the environmental crisis. Even worse, in the face of the financial crisis that has yet to end, the orientation of our governments is quite simply to more extractivism, more problems both upstream and downstream and, above all, a total refusal to integrate into their analyses the unimaginable environmental chaos that we will bequeath our children.

The Canada of Stephen Harper is the perfect example of this strategy of a relentless race towards the great void, towards immediate profit with no consideration of the consequences. The beginning and the end of the Canadian economic strategy is the coveting of more petroleum products from tar sands. Aside perhaps from security, the Conservatives are prepared at a minimum to risk all other sectors to ensure the unhampered development of Canadian oil! This is why the Canadian Government still injects nearly a billion and a half into the industry every year. This is also the sole reason for the Canadian withdrawal from the Kyoto Protocol. This is the essence of Canada’s new overture to China. This is the reason for the recent establishment of a new Canadian International Institute for Extractive Industries and Development, while institutions like Rights and Democracy are being shut down. This is the basis of the overt attacks against Canadian and Quebec environmental organizations, against anyone in fact who finds fault with the strategy. Etcetera!

With his Plan Nord, Jean Charest is demonstrating that he is still a Conservative at heart, for extractivism is also his one and only calling card.

From Rio to Ottawa

In Rio, a very special mention, the only one of its kind, was made of the Government of Canada in recognition of the particularly detrimental role of its national and international extractivist policy. More so than even the United States, Canada vehemently combats any suggestion that would cast a mere shadow over the use of fossil fuels as the principal source of the world’s energy.

This Canadian "nomination" clearly signified that the follow-up to the People’s Summit in Rio is not another summit held somewhere in the "elsewhere." If we want to be consequential with those communities at home and abroad who are affected by the Canadian policy, the determining factor in the coming months will be the work that we accomplish here, precisely against just this extractivist policy, against the production and distribution of oil from tar sands. Our struggles here over these issues will have an international impact.

For several months now, meetings have been held in Montreal, Ottawa, Toronto, Vancouver and elsewhere. Others are expected in the coming weeks in St. John, Calgary, Winnipeg ... On the agenda, an acknowledgement shared by all sides of the urgency of building new alliances, particularly among the progressive forces of Quebec, Canada and the First Nations, articulated with, as one of the central axes, the environmental question.

In November 2012, in Ottawa, a first Founding Assembly of this new "People’s Forum" will be convened. It will bring together individuals and organizations desiring to break free from their traditional shackles, to break down the historical barriers, and to unite their forces against the policies of Stephen Harper.

I know that you will be part of it...

Translated from French by Paul Germanotta