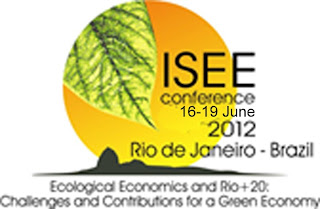 The debate over the Green Economy rages on next month in Rio de Janeiro, at the International Society for Ecological Economics meetings, the Cupula dos Povos alternative people’s summit, and the UN’s Rio+20 Earth Summit. Proponents and critics of ‘green growth’ capitalism will butt heads using narratives about valuations of nature and the efficacy of markets.

Boiling down a complex argument from her book Eco-Sufficiency & Global Justice, University of Sydney-based political ecologist Ariel Salleh observes how a triple externalization of costs ‘takes the form of an extraction of surpluses, both economic and thermodynamic: 1) a social debt to inadequately paid workers; 2) an embodied debt to women family caregivers; and 3) an ecological debt drawn on nature at large.’

At minimum, addressing these problems requires full-fledged re-accounting to toss out the fatally-flawed GDP indicator, and to internalize environment and society in the ways we assess costs and benefits. This exercise would logically both precede and catalyze a full-fledged transformation of financing, extraction, production, transport and distribution, consumption and disposal systems.

But it is only in the struggle for transformation that we learn how institutions of power hold fast to their privileges, and why genuine change won’t happen through mere tampering with national income accounts: ‘torturing the data until they confess’, the old economists’ adage.

The World Bank is one such institution, in part because the man taking charge next month, Jim Yong Kim, is a progressive medic and anthropologist. It’s fair to predict that he’ll add style to the Bank’s ‘talk left, walk right’ break-dance repertoire, spinning out arguments that will make our heads spin, while business continues more or less as usual.

A good example of environmental reformist PR can be found in the new Bank report, Inclusive Green Growth. ‘Care must be taken to ensure that cities and roads, factories, and farms are designed, managed, and regulated as efficiently as possible to wisely use natural resources while supporting the robust growth developing countries still need,’ argue Bank staff led by Inger Andersen and Rachel Kyte, in order to move the economy ‘away from suboptimalities and increase efficiency – and hence contribute to short-term growth – while protecting the environment.’

Of course, certain uses of resources are off limits for polite discussion, as Bank staff dare not question financiers’ commodity speculation, export-led growth or the irrationality of so much international trade, including wasted bunker fuel for shipping not to mention truck freight.

Yet the Bank cannot help but momentarily inject a power variable into its technicist analysis: ‘That so much pricing is currently inefficient suggests complex political economy considerations. Whether it takes the form of preferential access to land and credit or access to cheap energy and resources, every subsidy creates its own lobby. Large enterprises (both state owned and private) have political power and lobbying capacity. Energy-intensive export industries, for example, will lobby for subsidies to maintain their competitiveness.’

Would the Bank dare practice what it preaches about ending ‘inefficient’ subsidization, given how it amplifies irrational power relations when maintaining the world’s largest fossil-fuel financing portfolio? When Inclusive Green Growth argues that ‘Governments need to focus on the wider social benefits of reforms and need to be willing to stand up to lobby groups’, we cannot forget the Bank’s own largest-ever project credit, granted just two years ago. The $3.75 billion loan for a 4800 MW coal-fired power plant (‘Medupi’) was, according to outgoing Bank president Robert Zoellick and his colleagues, aimed at helping poor South Africans.

In reality the benefits are overwhelmingly to mining houses which get the world’s cheapest electricity (around US$0.02/kWh). The costs of Medupi and its successor Kusile are borne not just by all who will suffer from climate change (including an estimated 180 million additionally dead Africans this century). All South Africans are losing access to electricity through disconnections, and as a result, engaging in world-leading rates of community protest because to pay for Medupi and Kusile, price increases have exceeded 100 percent over the past four years.

The Bank’s Inclusive Green Growth arguments always return to profit incentives: ‘If the environment is considered as productive capital, it makes sense to invest in it, and environmental policies can be considered as investment.’

The nature-as-capital narrative leans dangerously close to the maniacal positioning of former Bank officials Larry Summers and Lant Pritchett, who in 1991 wrote their infamous memo in preparation for the original Rio conference: ‘The economic logic of dumping a load of toxic waste on the lowest wage country is impeccable and we should face up to that.’

Facing up to pollution externalities is deceptively simple within the Bank’s pre-existing neoliberal narrative, of fixing a market problem with a market solution. For example, ‘Lack of property rights in the sea has led to overfishing – in some cases with devastating results. The use of individual transferable quotas can correct this market failure, increasing both output and employment in the fishing industry.’

The Bank’s banal reversion to transferable quotas – also known as cap-and-trade – is most extreme in the greenhouse gas markets, where its writers fail to acknowledge profound flaws that have crashed the price of a ton of carbon from €35 to €7 these last six years. The Bank, which subsidizes carbon trading, mentions only a few allegedly-fixable European Union Emissions Trading Scheme design problems. It ignores the deeper critique of carbon markets developed, for example, in our new report, “CDMs Cannot Deliver the Money to Africa.”

Here’s an unintended consequence of Bank-think, however: if you do factor what it terms ‘natural capital’ into the national accounts, you find that when non-renewable resources are dug out of the soil, there should logically be a debit against genuine national savings (i.e. a decline in a country’s natural capital) instead of just a momentary credit to GDP.

Thus in many situations it becomes logical to leave resources in the ground (sacrilege!), especially in Sub-Saharan Africa, because since the commodity boom began in the early 2000s, according to another recent Bank report (The Changing Wealth of Nations), my home region has suffered negative genuine savings – ‘looting’ – mainly because of non-renewable resource decay in the context of resource-cursed neo-colonial politics.

I’ve had this argument with the Bank’s dogmatic chief Africa economist, Shanta Devarajan, and needn’t rehash it. Instead, let’s turn from Bank babble to listen to those at the base with more profound insights:

Via Campesina world farmers movement;
the Rio-based FASE Environmental Justice and Rights Center;
the ‘ETC Group ’ who critique techno-fixes;
feminists from the World Rainforest Movement;
German solidarity activists in BUKO;
and
the Dhaka Declaration of the South Asia Women’s Network, which deserves the last word:

‘Today, those who have created the ecological crisis talk of the Green Economy. For them, the Green Economy means appropriating the remaining resources of the planet for profit — from seed and biodiversity to land and water as well as our skills, such as the environmental services we provide. For us, the privatization and commodification of nature, her species, her ecosystems, and her ecosystem services cannot be part of a Green Economy, for such an approach cannot take into account our traditions. The resources of the Earth are for the welfare of all, not the profits of a few.’
Posted by Next Year Country