The Anatomy of the Global Warming Denial Industry 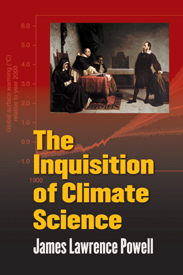 James Powell was inspired to write this important new book because of a remarkable paradox: among climate scientists, there is a near-unanimous consensus that global warming is occurring now, is largely human-made, and will cause very severe environmental problems if humanity continues business as usual. However, among the lay public the picture is much more mixed: only about half of the U.S. public agrees with the climate scientists. Why the enormous discrepancy?

Powell argues that “in the denial of global warming, we are witnessing the most vicious, and so far most successful, attack on science in history.” Although Powell himself is not a climate science researcher, he has an appropriate background to understand the field: he holds a doctorate in geochemistry from MIT and became a geology professor, teaching at Oberlin College for over twenty years. He has been a college president at three institutions, and served for a dozen years on the National Science Board. Powell’s book is a sharp attack on the global-warming denial “industry,” a network comprised of corporate funding, think tanks, popularizers, and propagandists, who all work with a compliant mass media.