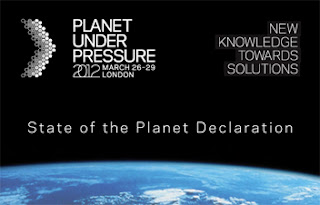 Scientists issued the first "State of the Planet" declaration at a major gathering of experts on global environmental and social issues in advance of the major UN Summit Rio+20 in June.

The declaration opens: "Research now demonstrates that the continued functioning of the Earth system as it has supported the well-being of human civilization in recent centuries is at risk." It states that consensus is growing that we have driven the planet into a new epoch, the Anthropocene, where many planetary-scale processes are dominated by human activities. It concludes society must not delay taking urgent and large-scale action.

"This is a declaration to our globally interconnected society," said Dr Lidia Brito, director of science policy, natural sciences, UNESCO, and conference co-chair.

"Time is the natural resource in shortest supply. We need to change course in some fundamental way this decade," she added. Over 3,000 experts in climate change, environmental geo-engineering, international governance, the future of the oceans and biodiversity, global trade, development, poverty alleviation, food security and more discussed the intricate connections between all the different systems and cycles governing our ocean, air, land and the human and animal life dependent on those environments.

Dr Mark Stafford Smith, Planet Under Pressure conference co-chair, said, "In the last decade we have become a highly interconnected society. We are beginning to realise this new state of humanity can be harnessed for rapid innovation." "But we need to provide more open access to knowledge, we need to move away from GDP as the only measure of progress, and we need a new way of working internationally that is fit for the 21st century," he added. "This conference has provided new ideas and practical solutions for the way forward."

The declaration concludes that, "a highly interconnected global society has the potential to innovate rapidly. The Planet Under Pressure conference has taken advantage of this potential to explore new pathways."
But, say Brito and Stafford Smith, effective planetary stewardship also requires: "More ways of participation at all levels, stronger leadership in all sectors of society; greater connectivity between those generating new knowledge and the rest of society; and rethinking the roles of science, policy, industry and civil society."

The conference presented new initiatives as recommendations for the Rio+20 Summit:

Based on a new economic indicator that measures natural, human and produced capital, the tool goes beyond GDP and can provide guidance for economic development towards sustainability.

Says Professor Anantha Duraiappah, Executive Director of UNU-IHDP: "Until the yardsticks which society uses to evaluate progress are changed to capture elements of long-term sustainability, the planet and its people will continue to suffer under the weight of short-term growth policies."

Off the back of the declaration and recognizing the interconnectedness of the current challenges, the four major international research programmes under ICSU that direct global environmental change science (the International Geosphere-Biosphere Programme; DIVERSITAS; the International Human Dimensions Programme; and the World Climate Research Programme) aim to rapidly reorganize to focus on global sustainability solutions.

Additionally, the programmes are proposing to develop platforms that facilitate cooperation with all sectors of society to develop a new strategy for creating and rapidly translating knowledge into action. "Such interactions should be designed to bring societal relevance and trust to science-policy interfaces, and more effectively inform decision-making to keep pace with rapid global change," reads the declaration. This strategy will form part of "a new contract between science and society" and includes the launch of a new international research programme, Future Earth.

The Planet Under Pressure conference marked the beginning of this new shift in direction, according to the conference co-chairs.

Delegates in London were joined by almost 8,000 people online worldwide and reached more than a million people through social media in the first three conference days.

Dr Brito said, "We have a positive message: strong leadership from all sectors and harnessing the increased connectivity offers some hope that the risk of long-term environmental crises can be minimized."

"This new connectivity is the beginning of how the scientific community needs to operate. We need a powerful network of innovation, North and South. This approach needs to be part of our DNA from now on," she added.

"My High-level Panel on Global Sustainability has just recommended that I consider naming a chief scientific advisor or establishing a scientific board to advise me and other organs of the United Nations.

UN Rio+20 Executive coordinator, Elizabeth Thompson, said, "politician or public servant, scientist or citizen, community or company, we are the shareholders of Earth Incorporated and have a joint responsibility to protect our common patrimony."

"The scientific community can help us make sense of these complex and interconnected challenges."

Conference delegates also heard how research advances in the previous decade have shown humanity's impact on Earth's life support system has become comparable to planetary scale geological processes such as ice ages. "Consensus is growing we have driven the planet into a new epoch, the Anthropocene, in which many Earth system processes are now dominated by human activities," the declaration states.

This new force risks pushing parts of the Earth system – the sum of our planet's interacting physical, chemical, and biological processes including life and society – past so-called tipping points.

Tipping points include the disappearance of summer sea ice in the Arctic, permafrost in Arctic regions releasing large quantities of greenhouse gases into the atmosphere, and the drying out of the Amazon rainforest. If these tipping points are crossed they can increase the likelihood of going beyond other thresholds generating unacceptable and often irreversible environmental change on global and regional scales with serious consequences for human and all forms of life on the planet.

The declaration stated that existing international arrangements are failing to deal with long-term development challenges such as climate change and biodiversity loss in an interconnected way indicating that it would be a mistake to rely on single international agreements. Research indicated that comprehensive sustainability policies at local, sub-national, national, and regional levels should be encouraged to provide "essential safety nets should singular global policies fail."
Posted by Next Year Country