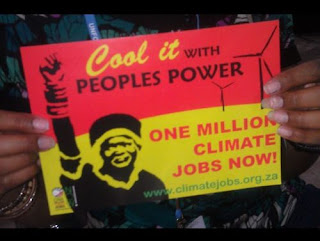 The ecological crisis is deepening. Despite 17 years of negotiations there is no binding global agreement on the reduction of carbon emissions and such an agreement is unlikely to emerge from COP 17 in Durban in December. In fact carbon emissions are rising which means climate change will intensify and have devastating impacts – particularly on the working class – in the form of rising food prices, water shortages, crop failures and so on. Africa will be the worst affected. So what is to be done?

According to Sean Sweeney: ‘In recent years global labor has worked on the premise that the ‘real world’ historical options are essentially two-fold. Either humanity will transition to some form of “green capitalism” where economic growth is delinked from emissions and environmental destruction generally, or we face a “suicide capitalism” scenario where fossil-fuel corporations and major industry, agriculture, transport and retail interests are successful in maintaining business as usual’ (Sweeney 2011: 9).

Avoiding the suicide scenario and making the transition to a low carbon or ‘green’ economy will be particularly challenging for us in South Africa given the carbon intensive nature of our economy and the continued dominance of the ‘minerals-energy complex’.

Recently the South African labour movement has expressed its commitment to a ‘just transition to a low carbon economy’. However this article argues that this is contentious with very different understandings of the scale and nature of the changes involved. A ‘just transition’ could involve demands for shallow change focused on protecting vulnerable workers or deep change rooted in a vision of dramatically different forms of production and consumption. In this sense the ecological crisis represents an opportunity: to not only address the unemployment crisis in our society, but to demand the redistribution of power and resources; to challenge the conventional understanding of economic growth and to mobilize for an alternative development path .

It could also generate a new kind of transnational solidarity, larger, deeper and more powerful than anything we have yet seen. Moving beyond solidarities based on interests or identities, Hyman emphasizes that ‘the challenge is to reconceptualise solidarity in ways which encompass the local, the national, the European and the global. For unions to survive and thrive, the principle of solidarity must not only be redefined and reinvented: workers on the ground must be active participants in this redefinition and reinvention’ (Hyman
2011:27).