The Economic Costs and Benefits of the Proposed Northern Gateway Pipeline 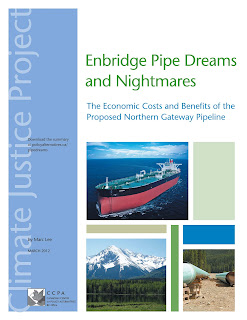 A new study reviews the economic case for the Enbridge Northern Gateway Pipeline (NGP) and casts serious doubt on claims that the pipeline will lead to substantial job creation and other economic benefits.

Enbridge claims that the NGP will create 63,000 person years of employment during the construction of the pipeline, and 1,146 full-time jobs once it’s completed.

“That sounds like a lot of employment, until you start breaking down the numbers,” says Marc Lee, senior economist at the Canadian Centre for Policy Alternatives’ BC Office, and author of Enbridge Pipe Dreams and Nightmares: The Economic Costs and Benefits of the Proposed Northern Gateway Pipeline.

The study finds that Enbridge’s job creation estimates are based on flawed modeling and questionable assumptions. Estimates assume that workers would otherwise be unemployed, and a large share of the estimated jobs come from induced employment, i.e. the economic impact of expenditures by Enbridge workers and governments. These “induced” impacts are particularly difficult to estimate and notoriously easy to overstate.

While the NGP would certainly create massive profits for Enbridge shareholders, workers will see only a small share of these. A comparative public investment in green jobs and industry, which could be funded through a relatively modest carbon tax, would produce at least three times as many jobs, without risking Canada’s energy security or entrenching our role as an exporter of raw commodities. And, of course, it would diversify our economy away from fossil fuels.

The study reveals other problems with framing the NGP as an economic boon: