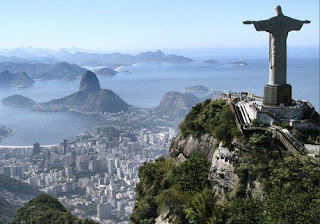 A thematic Social Forum focused on "Capitalist Crises, Environmental and Social Justice" was held from January 24-29, 2012 in Porto Alegre, Brazil. The dominant theme of the Forum was the upcoming Rio+20, the UN Conference on Sustainable Development taking place this June in Rio de Janeiro, 20 years after the famous 1992 UN environmental conference held in the same location. The great sociologist Boaventura de Sousa Santos has written a thoughtful report on the Porto Alegre event.

Santos notes that social movements focused on the challenges that the current form of globalization poses: climate change, water shortages, salinization, desertification, the devolving quality of food, the privatization of biodiversity and modern society's perpetual inability to control technology. As well, activists presented proposals that could replenish nature: food sovereignty, responsible consumption, the defence of humanity's common goods, non-Eurocentric forms of knowledge, ecological democracy and the move from an anthropocentric civilization to a bio-centric one. The genius of the social forum space is that it facilitates a global alliance of progressives by encouraging the articulation of common frames of understanding across diverse, often divided, movements such as environmentalists and leftists.

Ecologists and socialists have historically had an ambivalent relationship with each other. The former often thought along the lines of "We are neither Left nor Right; we are in front." This interpretation was predictable in light of the challenges that environmentalists were among the first to identify: both socialists and capitalists indiscriminately supported maximum economic production -- especially of weapons -- with minimal regard for its impact on nature. Statists, at their worst, have viewed nature in terms of resources and statistics while most corporations have interpreted the environment in terms of commodities and profits: in both cases, nature has relentlessly been transformed into an object and quantity for human use, with little regard for its less easily commodified values. Thus it was reasonable that environmentalists historically resisted aligning themselves with leftists but rather insisted on a political identity that extended beyond the traditional ideological dualisms of the modern era.

With the advent of a global social forum process, the ecological resistance to the left and the leftist suspicion of environmentalists has at least temporarily diminished. There are numerous types of environmentalists -- for the first time substantially coming from different classes and ethnicities -- who have recently risen to social movement prominence with the understanding that the struggle against the excesses of modern technological rationality is best fought alongside the newest progressive global movements. Some of these environmentalists are aboriginal communities protesting toxic dumping, environmental justice activists like Robert Bullard fighting against racism, peasant movements like the APM World Network struggling for food sovereignty, and eco-feminists like Vandana Shiva, who point to the benefits of post-developmental forms of knowledge. These diverse strands of the ecological movement have more than any other educated the public and other environmentalists about the indivisibility of numerous forms of depredation.

Substantial sectors of the environmental movement have moved to embrace the concerns of left and many leftists have themselves begun to integrate an ecological framework. The greens have understood the hazards posed by neo-liberal globalization and the newest left has seen that the traditional state has become almost as problematic as the corporation in terms of producing inequality and environmental damage. This evolving transnational co-operation of progressives should kindle dreams: while short-term victories are uncertain, the activists at Rio+20 may demonstrate that the global justice movements are mobilizing resources, populations and knowledge that will in the long run renew the planet.

Thomas Ponniah was a Lecturer on Social Studies and Assistant Director of Studies at Harvard University from 2003-2011. He remains an affiliate of Harvard's David Rockefeller Center for Latin American Studies.
Posted by Next Year Country