Dear comrades of the National Union of Metalworkers of South Africa (NUMSA): 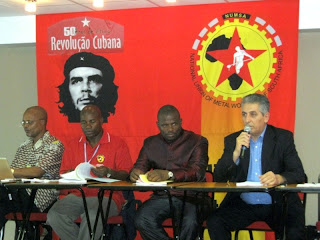 It is a great honor and joy for WFTU being here today with our comrades from South Africa and representatives of the international trade union scene. Our joy is even greater because we participate in an initiative of NUMSA which is a historic, militant, class-oriented organization.

We salute the struggles of NUMSA, which are important not only for the workers of the metalworking sector in your country but also from the wider region.

NUMSA is one of the three organizations that are members of WFTU in South Africa. This year, WFTU celebrated 66 years of class struggle for the interests of the working class worldwide. Another historic event that took place in Athens, Greece this year was the 16th World Trade Union Congress in which more than 828 trade unionists from 101 countries of the world participated.

Over the last fifty years the environment is receiving increasing pressure from the way the productive forces “develop” in the conditions of the imperialist new order. Moreover, the deep crisis of the capitalist system at the economic, social, cultural and environmental level worsens even more the situation today.

The consequences are more and more intense for the working class, the farmers, the poor and middle strata of the city – in other words - the majority of the planet’s inhabitants whether they belong in the developed or the developing countries.

On the one hand the number of workers who participate in the wealth-producing process is increasing. On the other hand, the number of exploiters who accumulate in their hands the means of production and appropriate the produced wealth is decreasing, as they seek to increase their wealth only for themselves.

The hunt for super-profits by the transnational monopolies causes severe disasters to the planet, condemns the one third of the planet to starve and to live in miserable conditions: lack of protection against natural disasters, global warming, reduction of the productive ozone shield, depletion of natural resources, destruction of forests, desertification, genetically modified organisms, nuclear and toxic waste, dangerous nutritional dependence on transnational monopolies, air pollution, lack of access to clear water.

The labour environment continues to be a cause of diseases and death for a big number of working people every year. According to ILO data, more than 1 million working people every year lose their lives because of the unacceptable working conditions. According to the same source, more than 160 million of working people suffer every year from occupational diseases. The generalities [of the ILO slogan] for “decent work” do not stop deaths. Decent work in general -- and as loosely as it is used -- doesn’t mean anything. For WFTU, decent work is stable and full-time work, a good salary, a good pension, social insurance, health and safety measures in the workplaces, and strict punishment of employers.

Scientists are sounding the alarm for the rise of temperature that will cause the ice melt at both poles, the sinking of coastal cities and natural disasters. The pollution trade increases severely the threats for the Third World.

It is common knowledge that millions of people all over the world, amongst them 400 million children, are struggling for their lives without access to clean drinking water. The commercialization of water generates misery and deaths.

The monopolies and the multinationals from USA and Europe are accelerating and widening the growing and trading of genetically modified products despite the declarations of scientists on the dangers lurking for human lives in the animal and plant environment.

A worse result of the imperialist order is the imperialist invasions, wars, and the civil conflicts whose impact will burden the lives and the health condition of many future generations.

Depleted uranium is the most severe environmental problem that the NATO bombing inherited at Kosovo, Serbia and Bosnia in 1999.

Measurements taken by international foundations, like the UN and other organizations, found that the inhabitants had been exposed to an amount dangerous enough to cause cancer and leukemia. The UN scientists named this phenomenon “the Balkan Syndrome”.

In Libya, the NATO bombing with hundreds of Tomahawk missiles was a disaster not only in human lives but also for the ecosystem of the country and the Mediterranean Sea. It resulted in the creation of a “toxic dust” that caused damage in the human organism, carcinogenesis and disorders of the nervous system.

But also, with respect to the rest of Africa, the list of provoked civil wars is endless: Congo, Rwanda, Sudan, Chad with corresponding impact in the people’s lives.

The murderous Israeli air raids against Palestine and Lebanon with the pollution of the water resources and the destruction of the fauna and flora, and at the same time, the embargo of the USA and EU against Cuba continuing now for 51 years, bring us to the following question: What does the environment mean for capital and its political representatives?

It is nothing more than a source of profits and the plunder of the planet’s natural resources.

Who Is to Blame? What Are the Causes?

It is not the fault of human beings, in general, neither their labour and their knowledge nor their scientific and technological achievements who are to blame for the greenhouse effect and the holes in the ozone layer. Humanity in general is not to blame for the immense disaster of the natural environment, the continuous downgrading of the urban environment, the intensifying expansion of the slums, and the intensifying impact of the weather phenomena in burden of the poor popular strata, nor for the lack of clean water and healthy food, nor for the destruction of cultural monuments and the diseases that kill dozens of millions of people every year.

On the contrary, it is the nature of the capitalist system that is to blame, since it generates, reproduces and worsens those problems, with the continuous chase for bigger profit and the ensuring of the most powerful geostrategic position that will provide it. This is the framework of the quarrels between the imperialist centers in the relevant international conferences, such as the one in Copenhagen. Their disputes reflect the intensification of their contradictions for the control of the markets, which is expressed in the determination of the goals as well, the mechanisms of control and the distribution of the funding for the challenge of climate change.

The capitalist system, which is in decay, is also the background for the wars and imperialist invasions that destroy not only the environment but the international cultural heritage and thousands of lives as well. It is the background also for the huge ecological disasters of a technological nature, like the one at the Gulf of Mexico by the monopoly of BP, the recent nuclear accident in Fukushima, Japan, such as the houses of the poor in Turkey that were demolished by the earthquake or the houses of the poor that were drowned by the floods in Asia and Central America. This is why the protection of the environment cannot be confronted in a manner independent of the class mature of the development path followed by each society.

The working class, the popular strata realize this more, year after year, since they gain their own experience for the role these disorienting slogans about the “joint responsibility of all” and for “the people over profit” play. The same as the “voluntary” but highly paid activity of the accredited international and national “Non Governmental Organizations”.

The working people cannot be trapped in the slogans for “green economy” which actually means “green business” and new fields of profitability for the monopolies.

We believe that imperialism, capital, the monopolies and the governments that serve them do not play without an opponent. They have to deal with the working class, the poor and middle-class peasants, the self-employed, the petty business owners, the labour intelligencia in the developed and developing countries, the vital interests of whom are identical with the need for a harmonic symbiosis between man and nature.

We are all, people of labour and toil; we are the ones who produce the wealth of the world, who realize daily that not only our working place put the planet itself is closely combined with our lives and with the lives of our children and our descendants. It is the place we work in, where we create, we rest, we dream, from where draw power for more achievements.

In this world, the working class, especially the forces of WFTU, we consider as an important tool in our hands, the great historic conquest of our last century, the socialist way of production so that the land, the forests, the coasts, the mineral wealth, the ports, the airports can become social ownership.

The centralized planning of the economy - having in its center the total welfare of the working people- the social ownership of the means of production, the planning of the use of land which belongs to the whole society, the promotion of research and the selection of the best technology according to the long-term and constant combined satisfaction of the people’s needs, these are the only stable bases for a harmonic symbiosis of man and nature, for their common progress and development.

And all of those combined with the elimination of wars, the cultural development, the cultivation of solidarity amongst the people of the planet, highlight from the prospect of the protection of the environment and the saving of our planet, the Mother Earth, not only the timeliness but also the historic necessity for another path of development, for socialism.

This is the target for which we call all the working people in common action, in order to build a better world, a fair world, a world for us and our children without the barbarity of the capitalist system.