‘Forests are not for carbon stocks’

By Yusuf Omar
The Mercury
December 2 2011 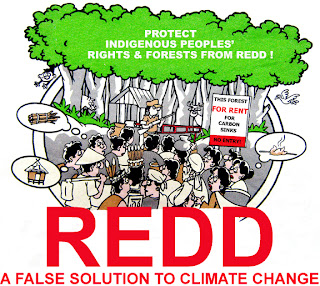 Bolivia came out swinging at its first press conference of the climate change conference yesterday, criticising the Green Climate Fund – which is meant to help developing countries adapt to climate change – and opposing the Reducing Emissions from Deforestation and Forest Degradation scheme (Redd).

“Bolivia is showing strongly against the mechanism of Redd. The role of the forest is not for carbon stocks,” said the head of the Bolivian delegation, Rene Orellana.

Redd is a set of steps designed to use financial incentives to reduce the emissions of greenhouse gases from deforestation and forest degradation. The forest produces carbon credits and therefore becomes an emissions offsetting scheme.

While most countries have been hesitant to overtly state their positions at such an early stage in the negotiations, the Bolivian delegation took a strong stance against the mainstream consensus of the talks thus far.

“As people who live in the forest, we are not carbon stocks. We disagree with Redd because we oppose the commoditisation of the forest,” said Orellana. Fifty percentt of Bolivia is blanketed in forest, 40 percent of which is in lowlands near the Amazon.

“It’s a complex and dangerous situation to see forests as carbon stocks. The forest provides a role as food security, a water source and biodiversity for our indigenous population. Redd reduces the function of the forest to just one, carbon stocks,” he said. “We have an alternative proposal, not based on market solutions.”

“We have put the proposal on the table, but no attention is being paid. We are not saying the system should be the same in Bolivia and South Africa, although we share many of the same environmental issues. Most of the countries are supporting Redd,” said Orellana.

He also went on to criticise some of the details of the proposed Green Climate Fund. “We do not agree with having results-based payments,” said Orellana.

Countries agreed to form the Green Climate Fund during climate change talks in Cancun, Mexico, and a transitional committee was formed.

While Bolivia is somewhat politically unstable, with recent student riots in November, its environmental stand is firm.

In Cancun, Bolivia was the irritating thorn in the side of the US and the EU.

This year, the South American country also passed the world’s first laws granting all nature equal rights to humans. “We must have respect for the rights of Mother Earth,” said Orellana.

Email ThisBlogThis!Share to TwitterShare to FacebookShare to Pinterest
Labels: International, Trade and REDD