An ecosocialist proposal to the global crisis 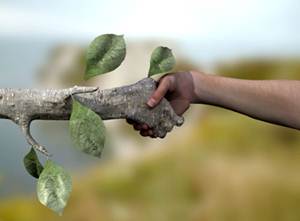 A set of environmental indicators show that if mankind does not change his style of development, less than a century will put at serious risk the survival of the planet and mankind. Mészáros reminds us, each new phase of forced postponement, the contradictions of the capitalist system can only worsen, bringing with it a greater danger to our own survival.

Contemporary Ecosocialism arises precisely as a response to this self-destructive dimension of capitalism and is seen as a rational and feasible alternative to the social and environmental crisis facing civilization and humanity.

Recent events have shaken the world clearly demonstrate a phenomenon that has been presented and discussed for several decades. The depletion of predatory productivist model and threatening with increasing intensity the material basis of life on the planet. Climate change is a fact that at this point can not deny. Although there is almost global agreement between the scientific world on its inevitability, there is still considerable uncertainty about the actual consequences it may entail. In Latin America it is estimated that the greatest impacts of these changes are beaten down especially on agriculture, fishing and access to drinking water. This situation becomes even more evident the second contradiction of capitalism, that is, that in addition to the classic contradiction between capital and labor, poses a prominent contradiction between the destructive forces of capital and predatory nature.

The theme of ecological limits to economic growth and the interrelationships between development and environment were reintroduced in Western thought [1] in the sixties and early seventies by a large group of theorists, which can be highlighted Georgescu-Roegen , Kapp, Naess, Sachs and Schumacher. For example, in a pioneering work of Ernst F. Schumacher "Small is beautiful" (Small is Beautiful) published in 1973, Germano-British economist makes a compelling critique of the productivist model Western societies would lead to environmental disaster and life itself, to try to understand how humanity whole problem and start seeing new ways to develop new production methods and consumption patterns in a lifestyle designed to last and be sustainable. Despite differences in approach and more or less militant position of each of these thinkers, which looms as an aspect common to all is the vehement criticism of production and consumption model inherent to capitalist development.

This model, which has generated an exponential growth in exploitation of natural resources and encourages reckless spending, especially in the northern hemisphere countries, is responsible for both causing a depletion of resources and produce tons of garbage daily pollute water, air and earth. [2] Each year we lose 14.6 million hectares of forests and thousands of species, reducing and irreversibly eroding biodiversity. Continues the devastation of the forests, which the world loses annually about 17 million hectares, equivalent to four times the size of Switzerland. And since no trees to absorb excess CO2, the greenhouse effect and global warming worsen. The ozone layer, despite the Montreal Protocol, will not recover until mid-century. Carbon dioxide in the atmosphere (370 parts per million) has increased by 32% from the nineteenth century, reaching the highest concentrations of the last 20 million years ago, and today we add to the atmosphere annually more than 23,000 million tons of CO2, accelerating climate change. It is expected that carbon dioxide emissions increase by 75% between 1997 and 2020. Each year we issue about 100 million tons of sulfur dioxide, 70 million of nitrogen oxides, 200 million of carbon monoxide and 60 million particles in suspension, compounding the problems caused by acid rain, tropospheric ozone and pollution Local air.

In short, a set of environmental indicators studied in recent decades seem to reveal ever more clearly that if mankind does not change his style of development, less than a century will put at serious risk the survival of the planet and mankind. Mészáros reminds us, each new phase of forced postponement, the contradictions of the capitalist system can only worsen, bringing with it a greater danger to our own survival.

Subsequent environmental catastrophes and "weather" that has suffered the world since Chernobyl and the recent tragedy of the Fukushima plant, substantiate without exaggeration that we are in an advanced stage of risk manufactured or structural crisis, not only of capital but sustainability of the species. XXI Century has begun with a catastrophic imprint, with a degree of ecological and natural disasters unprecedented in world history. [3] Given this situation uncertain and bleak have been a number of initiatives (such as the World Conference of Peoples on Climate Change Climate) seeking to build alternatives to the productivist model, currently prevailing predatory and exploitative. Contemporary Ecosocialism arises precisely as a response to this self-destructive dimension of capitalism and is seen as a rational and feasible alternative to the social and environmental crisis facing civilization and humanity.

As stated in the Manifesto Ecosocialist Kovel and Löwy written by "the ecological crisis and the crisis of social decline are deeply intertwined and should be viewed as different expressions of the same structural forces that shape the dynamics and expansion of the world capitalist system. This crisis would have its origin, first, the rapid industrialization process that exceeds the capacity of the land for processing, buffering and content, and, with it, as part of the process of globalization, with all the consequences and disintegrative effects on the societies where it is imposed. (...) The current capitalist system can not regulate the crisis that he has put in place, much less overcome. The system can not solve the ecological crisis because to do so requires setting limits on the accumulation, which is an unacceptable option for a social system supported on the imperative to grow or die. In short, the capitalist world system is historically bankrupt and in ecological terms is profoundly unsustainable, must be changed or replaced if it is to make the future worth living. "

Thus, ecosocialism seeks to break dramatically with the destructive practices and predatory forms derived from a mode of production and consumption of highly demanding natural and human resources. Ecosocialist response represents a break with an expansionist capital model as productivist perspective of 'real socialism'. For ecosocialists either the logic of market and profit, as well as bureaucratic productivism vulgar economistic Marxism, models are considered absolutely incompatible with the urgent and urgent need for environmental preservation.

Some critics have pointed out that this current conception is an eco-socialist utopia, a fantasy, creative writing or viability unscientific to be put into practice. However, even if we do a quick read on the future of the planet, we can directly reach the conclusion that there is an urgent rethink, first, the current energy mix used to "flush" the land. Dependence and excessive use of fossil fuels have disastrous effects not only directly on ecosystems, but also cause permanent and bloody conflict over control of oil resources. Then ecosocialism necessarily incorporates a proposal for clean energy sources and renewable myth and radically alter the relationship of domination / enjoyment / destruction of man over nature.

Furthermore, the use of alternative energy (geothermal, solar, wind, etc..) Must be accompanied by a broad discussion about the very notion of progress / development based preferably on economic growth. [4] The idea of ​​the decrease can also be considered illusory, a kind of naive and retrograde philosophy, but recent evidence of the devastation of the planet may point in another direction: the alternative for the decrease and discussion about the power and the unequal distribution of natural resource use should be with security essential part of any agenda that seeks to discuss the future of humanity. In this sense, the debate over the decline may also be considered part of the construction of an ecological and social projects, since it includes in its heartwood conception of the need to move towards a different mode of functioning of society, more democratic, egalitarian, participatory and dramatically redefine the current model of production and consumption, trying to achieve the welfare of all within the framework of a new relationship between humanity and nature.

Thus, both ecological socialism as the prospect of the decline represents a reorganization of life in many areas, use artificial means giving the consumer to undertake a self-limited and appropriate to the real needs of people, supposed to think about the use alternative energy and clean, pose ecological footprint through local activities and more equitable relations between members of a community.

In short, eco-socialism, decrease or Sumak Kawsay seek centrally reflect on the strategies that have been built in function to reverse the deleterious consequences of the current pattern of production and consumption, to make a change at the level of civilization that enable them to pursue a "good living "in a framework of respect for people and nature. www.ecoportal.net

Fernando de la Cuadra - Chilean sociologist. A graduate of the University of Chile. Doctor in Social Sciences from the Federal Rural University of Rio de Janeiro. Consultant to the Inter-American Institute for Cooperation on Agriculture, IICA. Member of the University Network of Researchers on Latin America (Rupal). -22 March 2011 - http://fmdelacuadra.blogspot.com/

Notes:
[1] We refer to a reintroduction, because we believe that the origin of these concerns is the anticipatory work of a contemporary of Marx, William Morris, which had already introduced eco-socialist elements of a vision in his writings, especially his novel utopian News from Nowhere.
[2] For example, it is estimated that if the average power consumption of the United States was generalized to the entire world population, known oil reserves would be exhausted in just 19 days.
[3] A report from the International Strategy for Disaster Reduction (ISDR) United Nations agency, said that 2010 was the year when there were as many natural disasters in the past three decades, and the number of people who lost their lives for these losses amounted to 300 000 victims.
[4] For a decade, there was a debate that has been gaining ground in academic circles and civil society on the urgent need to replace the current growth pattern in effect for a model of 'decline' sustainable.
Posted by Next Year Country