Bill McKibben, David Suzuki and others sign letter in support of the actions taken by the Canadian youth in Durban. 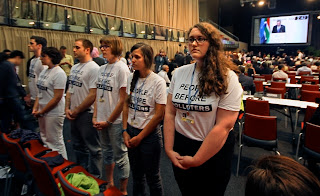 On Nov. 28, international climate-change negotiations began in Durban, South Africa, as the 17th annual Conference of Parties (COP17) got underway. This is the third in a series of blog posts from Amara Possian, who is the co-ordinator of the Canadian Youth Delegation to this conference. Today, Amara shares a letter signed in support of the actions taken by Canadian youth while Environment Minister Peter Kent addressed the United Nations conference on Wednesday.

On Wednesday morning, six young Canadians stood up during Environment Minister Peter Kent’s plenary address to the United Nations climate negotiations. The six Canadian youth stood silently and turned their back on Kent for several minutes, wearing shirts that read “People before Polluters” and “Turn your back on Canada,” before being escorted out by UN security.

We, the undersigned from across Canada and the world, support these youth for their bold refusal to let the Canadian government negotiate away their future.

On this issue, Canada is becoming a global pariah, standing alone as the only country to ratify the Kyoto Protocol and then refuse to honour it.

However, the Canadian government has not just been inactive. It has relentlessly pursued short-term profits from the production of the dirtiest oil on the planet: the tar sands. It now protects the interests of corporations over the health and livelihoods of people. In the past year alone, the government lobbied for the Keystone XL pipeline and sought to weaken fuel standards in Europe. The expansion of the tar sands spells “game over for the climate,”, but the Canadian government has publicly stated that its priority was coming to the negotiations to defend the tar sands. Not only that, but the government has been accused of threatening to withdraw aid money to coerce poor countries into arguing against a second Kyoto period.

For these reasons and more, we stand with these youth and their walkout of Canada's address to the High-level Plenary of the United Nations climate negotiations. We support their actions and so too demand that the Canadian government start putting the interests of people before polluters. For too long our leaders have lobbied on behalf of the fossil fuel industry rather than protecting the future of its people.

The Canadian Union of Postal Workers