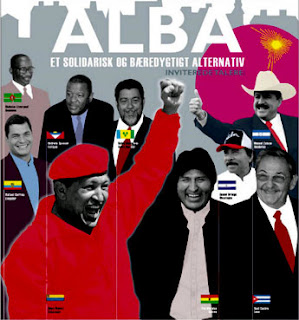 Representatives from the Latin American and Caribbean governments that make up the Bolivarian Alliance of the Peoples of Our Americas (ALBA) met in Bolivia on November 17-18 to coordinate their battle plan ahead of the international climate change summit in Durban later this month.

ALBA unites eight countries, including the radical governments of Venezuela, Bolivia, Cuba, Ecuador and Nicaragua. It helped lead the fight at the 2009 Copenhagen summit against attempts by rich nations to impose their anti-environmental plans.

This year’s summit will try to reach agreement on commitments for the second period of the Kyoto Protocol, set to begin in 2013.

ALBA rejects the idea of “voluntary emissions reductions” proposed by rich nations, which would destroy the Kyoto Protocol and will lead to catastrophic global temperature rises.

The ALBA summits declaration said conclusions reached at Durban must be “ambitious, balanced and based on scientific recommendations and evidence, on equity and the rule of law”.

It said developed nations, the primarily culprits for the climate crisis, must take on the greatest share of the burden to reverse current trends.

To help underdeveloped countries deal with the consequences of climate change, the ALBA meeting adopted Bolivia's proposal for a tax on international financial transactions.

The ALBA bloc said it would fight to ensure rich nations comply with the agreement reached at the 2010 Cancun summit for them to contribute $100 billion a year to help underdeveloped countries mitigate and adapt to the effects of climate change.

Contributions for 2011 fall far short of this target.

ALBA will also demand that rich countries contribute at least 1.5% of their gross domestic product to the Official Development Assistance to help poorer nations.

The ALBA bloc also agreed to Bolivia’s proposal to reject seeing forests as simply carbon-offsets to be traded on the carbon market, as with the current policy of Reducing Emissions of Deforestation and Forest Degradation.

ALBA advocates a vision that takes into account the role forests play not only in absorbing carbon, but also in food production, water, biodiversity and land.

After the successful October meeting in Panama between the ALBA bloc, the African Union, and the Group of Least Developed Countries, which represented about 100 countries combined, ALBA pledged to strengthen this alliance of underdeveloped countries.

Claudia Salerno, who headed Venezuela's delegation, said the three blocs resolved to work together to ensure that “all developed countries ... close the gap on two issues in Durban: the mitigation gap by reducing emissions under the Kyoto Protocol, and the gap on financing by offering long-term financial support [to underdeveloped countries] for emissions reductions beginning in 2013.”

Tosi Mpanu Mpanu, the Chair of the African Group of Negotiators for Climate Change, said that underdeveloped nations “are doing our part”, but developed countries must “move forward on the issue of financing to combat climate change and reduce emissions”.
Posted by Next Year Country