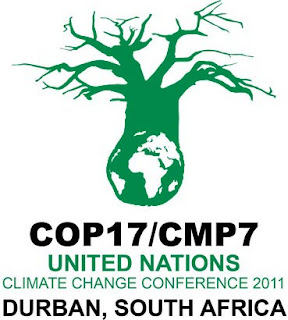 Climate change predominantly impacts those who have benefited least from fossil fuelled industrialisation. The poor have less social, economic and political capacity to adapt to climate change than the rich. The arrival of the global climate negotiating lobby on African shores must focus the minds of the world on how climate change impacts developing nations and how we propose to solve this problem.

When the 17th Conference of the Parties (COP 17) to the United Nations Framework Convention on Climate Change (UNFCCC) meets in Durban in late November this year it is important to raise global awareness of the implications for the global South – the poor and developing nations of the world. The matter of climate justice is central to any fair and binding solution.

The UN climate change framework arose from agreements made during the first earth Summit in Rio de Janeiro in 1992 to reduce emissions of greenhouse gases, which destabilise global climatic systems. The best-known outcome from the many subsequent meetings was the agreement made in 1997 at COP 3 in Kyoto, Japan, with the so-called Kyoto protocol to reduce CO2 emissions.

This was the first time any sort of international accord was reached to address and reduce the threat of human induced (anthropogenic) climate change. The Kyoto Protocol will expire at the end of 2012 and it is critical that the Durban COP 17 meeting cements further agreement on frameworks to prevent runaway climate change this century. Time is not on our side.

The Kyoto protocol had extremely limited goals, far below what is now recognised as necessary. Importantly it was not ratified by the world’s biggest polluter, the United States, which rendered its outcomes largely academic.

It is known that human induced climate change is no longer theoretical – the impacts are real and appear to be both more serious and rapid than the rather conservative scientific opinions expressed by the International Panel on Climate Change. These changes will predominantly affect those in the South who lack sufficient resilience to meet these multifaceted challenges.

Regions, like Pakistan and the Sahel in Africa, wedged between tropics and deserts, are far more sensitive to climatic disturbances than more temperate climates. Over the past two years Pakistan has experienced unprecedented monsoon flooding pushing this already marginal economy to the brink. The climate induced social and political consequences are profound.

The Sahel has experienced fairly regular drought cycles over the past millennium, influenced by various climatic cycles. However seriously disruptive droughts in that region between the 1960’s and ‘80’s are now known to be linked to fossil fuel related aerosols and particulates.

These influences, compounded by global warming, have worsened these drought cycles across the region, causing protracted hunger and social dislocation. It is notable that as cleaner fuels and improved emission standards have reduced the levels of man-made particles in the atmosphere, the severity of the Sahel droughts have diminished.

Those who deny the influence of human activity on the global climate are either incapable of internalising the realities or repudiate them in order to continue business as normal. This powerful lobby which continues to benefit from cheap access to fossil fuel technology has actively undermined meaningful political negotiations toward a meaningful resolution to the real problem – increasing emissions of greenhouse gases.

This self-indulgence perpetuates the historical economic inequality visited upon the global South by the developed North. This exposes the failure to achieve any sort of meaningful, ambitious and binding climate change treaty. The most powerful vested interests – the G8, the OECD, the developed North – are so profoundly politically compromised that they cannot see their way clear to make the needed changes. These dominant powers have more than hinted that there is little chance that agreement will be reached in Durban. Self interest remains writ large.

Besides the Kyoto Framework the next ‘best’ outcome that has emerged from these expensive and time consuming conferences is the so-called REDD+ framework. REDD stands for Reducing Emissions from Deforestation and Degradation and is a trading mechanism, which proposes to keep global forests intact in order that climate change is mitigated and hopefully reduced.

REDD is controversial for many reasons, but primarily because of a failure to agree on the definition of a forest. This may appear obvious, but is a forest is a virgin natural resource, or a man made plantation which is harvested and hence has economic value? Because of this sort of intentional ambiguity inherent in “solutions” like REDD, strong opposition has arisen amongst indigenous and environmental groups who are profoundly uneasy with these sorts of agreements.

REDD and other economic carbon trading schemes are essentially devices which enable powerful, vested interests to exploit both the climate change negotiations and its proposed outcomes to ensure the continuation of business as usual. Perpetuating the interests of the privileged is no longer an option. In an increasingly connected world the exploited have gradually evolved a far more coherent position. REDD, like carbon trading, does nothing whatsoever to address the real problem - to reduce greenhouse gas emissions. They are just REDD herrings.

Dealing with solutions to climate change involves more than the authentic threats to the ecological stability of the planet. At its core, climate change involves dealing with issues of social and climate justice. Those who have benefited from decades of exploitation of fossil fuels must make amends. Those who remain excluded from these benefits, be they in Somalia or Pakistan, or in tropical jungles or low lying atolls, cannot be expected to continue to bear these punitive costs of climatic instability on top of their already impossible burdens. Perpetuating this inequity flies in the face of a just outcome to the climate negotiations.

The evolving power of blocs like Brazil, Russia, India, China and South Africa (BRICS) has begun to provide some counterbalance against the old guard of developed nations. These shifts of economic and political power enable a change in the dynamic of negotiations.

This has become evident in how the South has refused the ratification of inherently unfair instruments like the World Trade Organisation’s Doha round, which would have perpetuated unfairness in global trade. Equally, in climate negotiations there needs to be far more negotiating parity between North and South, between rich and poor, between developing and developed, in order that just outcomes become possible.

The fact remains that we cannot continue the historical polarisation and deadlock that have dogged critical negotiations like the UN climate change accords. The Durban COP 17 meeting needs flexible leadership. It requires humility from the powerful to recognise that it is their world, which is under equal threat. Above all cohesion amongst the global South is paramount in order that the vested interests of the wealthy cannot undermine a united message of climate justice for all.

In a globalised world we are increasingly interdependent and connected - the failure of even one nation inevitably creates further instability. It is not an option to have weak leadership by the hosts or to allow ourselves to be pushed around. As Nelson Mandela memorably told Bill Clinton when he visited South Africa in 1998, we must tell the powerful to “jump in a big pool” if they are out of line.

We cannot allow another negotiation failure at our collective expense. We need to wisely and firmly guide our leadership. We must harness creative ways to make the North listen. Civil society must repeat successful campaigns like the Right to Know campaign which has had perceptible political impacts in South Africa.

The mobilisation of the “Climate Justice Now!” network in South Africa hopes to provide one such platform towards achieving a beneficial outcome. We certainly cannot abandon negotiating governments to be bamboozled by the none too tender mercies of the diplomatic and lobbying interests of conservative and corporate stakeholders.

We need a fair, ambitious and binding agreement which does not paper over the cracks. There can be no perpetuation of business as usual with the false promises of carbon trading, where the rich offset their impacts onto the poor, or REDD, where forests are stripped and replaced with monoculture plantations. What is urgently needed is an agreement that goes past symptomatic relief and cuts to the core issue - the introduction of across the board reductions in greenhouse gas emissions.

Climate justice is about cutting a deal at the COP meeting that provides just that – climate justice for all, not justice for the rich. It is time to show that Africa can lead. In doing so we, the people of Africa, must collectively hold our leaders responsible.

Ashton is a writer and researcher working in civil society. Some of his work can be viewed at www.ekogaia.org.
Posted by Next Year Country