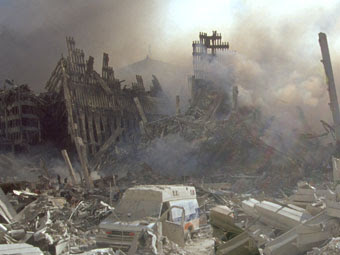 So much has already been said about the destruction of New York’s Twin Towers and the deaths of those left inside. Is there really anything more to say? Or are we ready to say and hear more? Is ten years long enough that we won’t just re-traumatize ourselves with the overwhelming images of suffering?

Though American audiences typically “eat up” disaster movies, they apparently aren’t ready to see a real one on 9/11. Collective post-traumatic stress has drawn people to more fantasy and escapism. So-called Reality TV shows, having little or nothing to do with reality, are now big hits.

Why is it still so difficult to learn from 9/11? What might we begin to learn on the 10th anniversary?

The collective trauma is understandable’ it’s the first time the U.S. has been attacked on its own soil. And in the aftermath of the planes being flown as explosives into the towers, U.S. officials, with much Canadian support, had to land thousands of airplanes across the world. A presidential order was given to shoot down any commercial plane that didn’t respond to military orders, a certain death sentence for innocent travelers. There was widespread chaos.

With the uncertainty and paranoia about what might have come next, things could have easily gone from bad to worse. Actually they did! And they still are! The military and toxic legacy of 9/11 is still catching up with us.

The live televising of the 1500 foot buildings consumed by fire and then collapsing into a hurricane of toxic debris had a global impact. These pictures, continually re-played, are burned into our collective brains. People are prone to do nasty things in the aftermath of such reinforced trauma. It matters little, critiques of the U.S.’s geo-political role, or the psychological and cultural roots for righteous rage; just stand aside. The U.S. has been at war non-stop with someone since 9/11. While it’s all expressed as retributive anger and fighting the “war on terror”, it carries an irrational undercurrent.

Ongoing warfare has played a central role in the U.S.’s rising debt and the right-wing politics of “cutting entitlements.” America has seen its worst economic downturn since the depression. The 2008 financial meltdown almost brought the global economy to a standstill. Some detached observers might conclude that the government has been so obsessed with fighting wars, it lost sight of regulating its own economy.

Strange things happen when blind patriotism rules. 9/11 was used as an excuse to invade and destabilize Iraq, which led to hundreds of thousands of innocent victims. But this suffering and death isn’t packaged by any single, catastrophic event, such as the death of 2,605 people, including 411 emergency workers, on 9/11. Our public morality is shaped by our own propaganda. Most people ignored the stunning fact that most of the “bombers” were from the U.S. ally Saudi Arabia. Deception about an imminent threat from Iraq’s non-existent WMD resonated deeply with an already frightened America. As fallacies were sifted from truths, most Americans didn’t know who or what to believe and a rash of conspiracy theory has gone viral.

Human rights suffered greatly as the Security State steadily gained ground. While there’s some public resistance to intrusive airport security we wouldn’t have previously tolerated, many draconian practices have become normalized. Some future historians may actually conclude that in the big picture Bin Laden won, as the American Dream and Empire continues to wane. The U.S. has remained more concerned about “getting its man” than with controlling its destiny in the post-9/11 world.

Some people have endured much more. Scape-goating Muslim Americans for what happened on 9/11 has been quite widespread. It’s comforting when we can point to the burning of the Koran, and suggest it’s a small handful of extremists perpetuating Islamophobia. But discrimination works in subtle ways. The Islamic Scare (remember the Red Scare!) has even given some blacks and whites, with their own history of racial conflict rooted in slavery, someone else to blame. While arresting a Muslin American, one black policeman was reported to whisper “you are the new niggers”. Some research shows that since 9/11, the wages of Muslim/Arab Americans have dropped relative to other ethnic groups. Racial profiling is now commonplace. A Muslim American comedian with the same name as a “terrorist” has been arrested and jailed several times.

What do the millions of Muslim Americans really have in common with the handful of Saudis that planned and executed the attacks?

There’s been much political toxicity since 9/11, but the physical toxicity will do more harm and it won’t distinguish Muslim from Christian or the non-religious. The toxic dust, containing everything from asbestos to heavy metals to dioxin, is directly linked to deaths of emergency workers. Fibrosis is increasingly showing up in clinics. Scarred lungs can’t effectively exchange oxygen and carbon dioxide, leading to lung and heart ailments and a propensity for other illnesses from the weakened condition. A slow death!

In spite of constant public praising of emergency worker-heroes, it took years of lobbying to get the U.S. government to create a $5 billion package for treatment and compensation. The Environmental Protection Agency (EPA) initially turned its back on “the national heroes”, by prematurely declaring the contaminated air safe. It ignored dangers from the dust residue that seeped into buildings and homes, and some clean-up crews were allowed to work without respirators. There will be latency periods for the cancers coming from 9/11; as one victim put it: “9/11 left the dust as a weapon – going on and on.”

It’s now estimated that 60,000 people are at risk. In 2010, 18,000 people received some kind of treatment. In terms of lost lives, the slow dying will be a much greater catastrophe than the deaths coming directly from the event. But it won’t be melodramatic.

Might environmental awareness deepen from the ongoing catastrophe? Will one legacy of 9/11 perhaps be prohibitions on toxic building materials used in construction today? So far, the wars in Afghanistan and Iraq have been a huge distraction from global warming. Ongoing military campaigns have not only led to hundreds of thousands of innocent victims, they have added greatly to the burning of fossil-fuels and the steady build-up of greenhouse gases. They’ve left long-lived toxic residue, such as radioactive depleted uranium (DU) used in many missiles, as “a weapon – going on and on”.

Gwynn Dyer constantly reminds us that the actual deaths from terrorism continue to be quite small compared to those from traffic accidents; or, it now seems, from the toxic aftermath of 9/11. The high profile reporting of each and every terrorist event however, keeps us locked in fear and fear can be contagious. The politics of fear is only starting to subside across the border, and were another attack to occur, it might again raise its ugly head. The Harper government milks “fear” every chance it gets; it’s hard to imagine Harper getting his majority government without constantly playing to “fear” in the wake of 9/11.

Our society is more militarized than before, and the greatest shift in public resources has not been to address the mounting global environmental crisis, but to build up the military capacity for even more war. So-called natural disasters last year – most notably in Japan, Pakistan, Australia and the U.S., were estimated to cost $260 billion, up from $60 billion the previous year. It seems we all remain in some political and environmental peril after 9/11.
Posted by Next Year Country