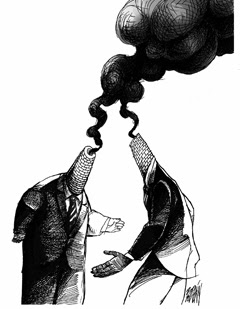 2.  Voluntarism, technological fixes and market incentives as they have been constructed cannot achieve even the weak Green House Gas targets gov­ernments have committed to. Even so, many govern­ments such as ours and that of theUSA, haven’t even initiated these market mechanisms like carbon taxes or cap and trade.

3.  We need to accept that we WILL pass the terrible tipping points that climate scientists like James Han­sen have been talking about for at least a decade now. And that the catastrophes they predict will happen, gradually at first and then rapidly as the feedbacks kick in.

4.  As the consequences of passing the tipping points eventuate, with droughts, floods, rising sea levels, growing numbers of climate refugees – states every­where will begin to exercise authoritarian measures to preserve order and to ensure that increasingly scarce water, food and energy resources are pre­served for the rich and to feed the material require­ments of corporate enterprise. Robert Heilbroner predicted this outcome back in 1974 in his Inquiry into the Human Prospect. Joel Kovel discussed the prospect more recently.

5.  We can already see the beginnings of the move towards authoritarianism – the xenophobic response to immigration throughout Europe, the attempt to destroy unionism in theUSA, the harsh way protest­ers against austerity measures are being treated, to say nothing of police repression against G20 pro­testers inToronto. And Stephen Harper’s deliberate efforts to silence his critics by shutting down or reori­enting research and advocacy organizations.

6.  It is essential for us to be critiquing market-based solutions and those, including most mainstream environmental organizations, who promote these solutions and insist on working within the system. We need to expose environmental organizations who accept funding from corporate-based foundations that are extensions of the energy industrial complex and thus allow themselves to be used by the perpetrators of climate change and bolstering their legitimacy.

7.  We need to be putting forth more structurally based solutions such as stopping the tar sands, massive investment in solar, wind and geothermal renewables and expanding public transit. Yet, we should accept that these solutions are and will be totally rejected by capitalist states and that, in any case, renewable energy cannot meet the mass energy requirement of consumerism and relentless economic growth especially in the light of ongoing neoliberal globalization.

8.  We need to be talking now about how we will respond to the ecological catastrophe as it unfolds and to the authoritarian actions of capitalist states to repress popular resistance against harsh austerity measures and to increasingly destructive methods of extracting oil and natural gas from less accessible sources.

9.  It will be essential to show how the economy can be transformed so that it does not require continuous growth and yet provides for the basic requirements of all citizens.

10.  Intellectual argument is not sufficient. Our move­ment will have to turn towards widespread forms of direct action to stop the ecocide and the austerity measures that shift the burden of the ecological crisis onto the lower and working classes.
Posted by Next Year Country