Rob Nixon’s Slow Violence and the Environmentalism of the Poor: A Review 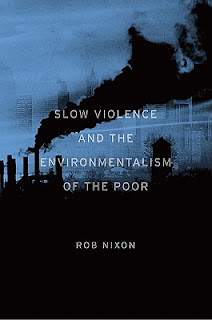 In Slow Violence and the Environmentalism of the Poor (Harvard University Press 2011), Rachel Carson Professor of English Rob Nixon explores the gradual and often ignored violence of environmental degradation, toxins, deforestation, and oil drilling in the Global South and Persian Gulf. The book is a well-written overview suggesting many years of thought, research, and analysis of many important ongoing socio-environmental crises, and the attempts by writers and activists to bring these “slow” issues to light.

I will begin with my academic quibble. The book’s title and thesis, slow violence, is clearly drawn from the research on structural violence – i.e. problems like hunger and malnutrition, inequality and poverty, and unequal access to health care that cause harm indirectly, rooted in the policies and practices of a society. Ignoring these issues or not addressing therefore becomes a form of structural, rather than personal, violence.

But, OK, Nixon wants to differentiate the concept of structural violence from his slow violence to stress that in a society increasingly focused on sensationalism and spectacle, how does such slow violence cut through the noise and get the attention and action it needs? Nixon wants to draw attention to the “attritional devastation” that takes place gradually over time and space. Slow violence may be less visible and get less attention, Nixon argues, but can still enact a lethal toll – maybe more so precisely because it is slow and out of sight.

To explore this, Nixon examines writer-activists affiliated with the environmentalism of the poor in the global South and Persian Gulf, many of whom “exemplify in their work the versatile possibilities of politically engaged nonfiction” (25).

The book focuses on a number of ongoing environmental crises, and their entwinement with politics and power: the Bhopal disaster in India, oil drilling in the Persian Gulf and Nigeria, the Green Belt Movement in Kenya, megadams in “developing” nations, and the effects of depleted uranium in Iraq. Nixon takes a particular look at the literature and writer-activists that have emerged out of these struggles, such as Ken Saro-Wiwa, Wangari Maathi, and Arundhati Roy, as well as fictional books such as Animal’s People and Cities of Salt.

Nixon is a great writer: his writing is clear and at times almost poetic. This almost uneased me, like the way he was writing about slow violence was so beautiful as to undercut its horror. On the other hand, the writer-activists themselves tend to strive for hope and beauty in the face of so much despair. The book is also informed by political, economic, sociological, and cultural theory, which Nixon weaves seamlessly with his discussion of literary texts and the writers who penned them.

The final result is a comprehensive overview of many different streams of environmental injustice, which can serve as a primer for those not familiar with these particular issues, while its discussion of both well-known and more obscure texts may offer something new to even those well-versed on the topic. In that regard, I can see how this would be a good book for both undergraduate and graduate studies across a broad range of humanities, social science, and environmental studies classes, as well as for those just interested in good writing on socio-environmental issues.

At the conclusion Nixon ponders if the growth and quickness of the Internet may offer a path toward making slow violence more visible and immediate. (Although in the Conclusion I have another quibble: Nixon ponders some of the potential pitfalls of the Net by suggesting that the “Climategate” emails were [initially] released by Wikileaks, which is just not true.)

Maybe the Internet does offer a way to draw more attention to slow violence. Yet slow violence may be a relative term – the effects of rapid resource extraction and industrialization seem to be giving way more frequently and readily to sudden disaster. In an age of climate change, peak oil, and growing water scarcity, is slow violence really as slow as it used to be? If not, it might be fruitful to take the lessons from Nixon’s book to lay out a global map for not just attention to these issues, but quick and widespread direct actions, before it’s too late.
Posted by Next Year Country