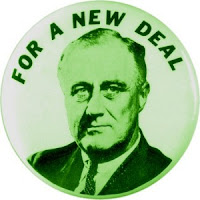 A Green New Deal is on everybody’s lips at the moment. Barack Obama has endorsed a very general version of it, the United Nations are keen, as are numerous Green parties around the world. In the words
of the ‘Green New Deal Group’, an influential grouping of heterodox economists, Greens and debt-relief campaigners, such a ‘deal’ promises to solve the ‘triple crunch’ of energy, climate and economic crises.

Frieder Otto Wolf, an ecosocialist and early member of the German Green Party, argues that the challenge for the global movements is to hijack the Green New Deal, rather than reject it. Tadzio Mueller, an editor of Turbulence, and involved in the Climate Justice Action network, begs to diff er. He looks instead to an emerging movement for ‘climate justice’. Turbulence sat the two of them down for a chat, and kicked off the debate by suggesting that a Green New Deal might actually offer a weak looking global left a great opportunity.