Toward a Nuclear Weapons Convention: A Role for Canada

Canadians for a Nuclear Weapons Convention

Five Canadian civil society organizations urged the Canadian government to act on motions already adopted by both the Senate and the House of Commons calling on the government “to deploy a major worldwide Canadian diplomatic initiative” for nuclear disarmament. 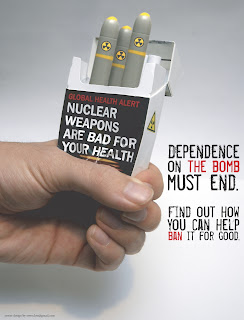 Recommendations of the Sponsoring Groups

The Ottawa Experts Seminar on a Nuclear Weapons Convention included participants from the academic community and civil society, as well as diplomats, parliamentarians, and government officials. The discussions addressed a broad range of legal, political, security, and verification requirements for progress toward a global legal ban on nuclear weapons.

Participants welcomed the unanimous motions in the Canadian Senate and the House of Commons encouraging "the Government of Canada to engage in negotiations for a nuclear weapons convention" and "to deploy a major world-wide Canadian diplomatic initiative in support of preventing nuclear proliferation and increasing the rate of nuclear disarmament."

Participants also took note of the Vancouver Declaration, a statement by legal experts, which holds that both the use and threatened use of nuclear weapons is contrary to international humanitarian law. The Declaration states that: “It cannot be lawful to continue indefinitely to possess weapons which are unlawful to use or threaten to use, are already banned for most states, and are subject to an obligation of elimination.”
The seminar discussions included broad encouragement for Canada to assume an international leadership role in exploring and promoting legal, political, security, and compliance measures conducive to the achievement of a world without nuclear weapons.

Taking into account the deliberations at the seminar, the sponsoring groups (Canadian Pugwash, Physicians for Global Survival, Project Ploughshares, and World Federalist Movement – Canada, all members of the Canadian Network to Abolish Nuclear Weapons) put forward the following recommendations to further advance that objective:

1. Canada should support UN resolutions calling for formal negotiations toward a nuclear weapons convention to begin in 2014 and should offer to host in 2012 a preparatory committee meeting of states and civil society representatives to begin planning for that negotiation process.

2. The Minister of Foreign Affairs should welcome the unanimous motions in the Senate and House of Commons calling for a new Canadian diplomatic initiative in support of nuclear disarmament and request that a special joint committee of the Senate and House of Commons hold hearings and prepare a report on how best to implement those unanimous motions.

3. The Government of Canada should re-establish a special disarmament verification unit within the Department of Foreign Affairs and International Trade. Significant human and financial capital should be directed toward building Canadian expertise with regard to nuclear disarmament, drawing on lessons learned from verification regimes related to nuclear non-proliferation, nuclear testing, and chemical weapons. An urgent priority is the development of verification procedures and technology in support of the still to be negotiated fissile materials treaty. The overall focus of the new unit should be to develop and implement credible verification mechanisms, procedures, and technology to ensure compliance with a nuclear weapons convention.

4. Canada should continue its efforts within the Nuclear Non-Proliferation Treaty (NPT) to promote transparency and accountability and to address the NPT’s “institutional deficit.” Such measures include proposals for annual decision-making meetings of the NPT, for the establishment of an ongoing administrative support unit, and for more consistent and comprehensive reporting by States Parties regarding national efforts towards full compliance with the NPT.

5. In support the NPT Review Conference’s call on states "to further diminish the role and significance of nuclear weapons in all military and security concepts, doctrines and policies," Canada should initiate discussions within NATO with a view to ending the Alliance’s reliance on nuclear deterrence. Such discussions should include the call for an immediate no-first-use pledge by NATO, as well as increased attention to transforming the security relationship between Russia and NATO. Canada should also insist on the removal of NATO’s tactical nuclear weapons from the territories of non-nuclear weapons states in Europe, and encourage discussions to begin leading to a global legal ban on nuclear weapons.

6. Canada should restore the practice of an inclusive approach to non-governmental organizations (NGOs), to take advantage of the expertise within the NGOs, for example, by restoration of the annual government-civil society consultation and by naming representatives of civil society organizations to the Canadian delegation to the First Session of the NPT Preparatory Committee, 2012. In this regard, we are pleased to note Canada’s endorsement of the “Berlin Statement by Foreign Ministers on nuclear disarmament and non-proliferation” of April 30, 2011 which includes this promise: "We will actively promote disarmament and non-proliferation education, based on our conviction that education is a powerful tool for mobilizing further disarmament and non-proliferation efforts
Posted by Next Year Country