Selling Nature to Save Nature, and Ourselves 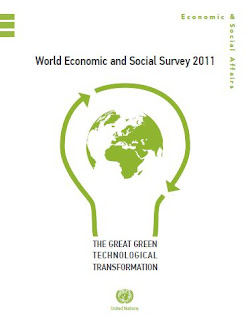 THE HAGUE - Avoiding the coming catastrophic nexus of climate change, food, water and energy shortages, along with worsening poverty, requires a global technological overhaul involving investments of 1.9 trillion dollars each year for the next 40 years, said experts from the U.N. Department of Economic and Social Affairs (UN-DESA) in Geneva Tuesday.

"The need for a technological revolution is both a development and existential imperative for civilization," said Rob Vos, lead author of a new report, "The Great Green Technological Transformation". [ Baker River Dam Site / International Rivers)] Many believe the green technology transformation that the new U.N. report calls for is unlikely to succeed without a move away from the economic growth-at-all-costs paradigm that dominates nearly everyone's thinking.

Absent in the U.N. report is a call for the other necessary transformation: what to do with the market-driven economic system that has put humanity on this catastrophic collision course? Attempts to "green" capitalism are failing and will fail, according to many of the more than 200 social science researchers at a groundbreaking international conference in The Hague titled "Nature Inc?" Jun. 30 to Jul. 2.

"We must start tackling and questioning some core capitalist dictums, such as consumerism, hyper-competition, the notion that 'private' is always better, and especially economic growth," says Bram Büscher, the conference co-organizer and researcher at the Institute of Social Studies (ISS) at Erasmus University in The Hague, Netherlands.

Equally important is to stop looking at nature as a collection of economic objects and services that "must only benefit some specific idea of human economic progress", Büscher told IPS.

Governments, the World Bank, the United Nations and development agencies, international conservation organizations and others have all come to see markets as the only way to mobilize enough money to end deforestation, increase the use of alternative energy, boost food production, alleviate poverty, reduce pollution and solve a host of other serious and longstanding problems.

Started as a small gathering of academics, Nature Inc? became a major event as hundreds of experts from around the world wished to participate. Büscher believes the main reason for this is that many are actively doing research on environmental and conservation issues and are increasingly running into new market schemes like carbon credit trading, payments for ecosystem services, biodiversity derivatives and new conservation finance mechanisms, and so on.

The market is putting new values on tropical forests as carbon sinks, reservoirs of biodiversity or ecotourism destinations, McAfee said during the conference.

The World Bank, U.N. and others say that the only way to generate large corporate sector and private investment to protect tropical forests is by payments for ecosystem services such as carbon and biodiversity offset markets such as Reduced Deforestation and Degradation for biodiversity known as REDD+. These are also touted as the way out of poverty for communities living in or near forests.

"However, markets are preconditioned on inequality and will only make matters worse," McAfee said.

Markets will look for the cheapest land available, which means the poorest will be displaced because they don't have formal land tenure or they will be persuaded by promises of large payments. In order to secure the investment, carbon traders will place restrictions on the use of the land for decades.

Technical assessments and monitoring will also be needed, which results in high costs as was the case for a project in Costa Rica, McAfee said. "The poor got very little...it didn't even cover their costs," she noted.

When the European Union committed to reduce its carbon emissions by 20 percent by 2020, some European multinational industries with high carbon footprints simply moved to countries like the United States where there were no restrictions, said Yda Schreuder of the University of Delaware.

"Europe going it alone on carbon reductions has resulted in higher overall emissions globally," said Schreuder, author of "The Corporate Greenhouse", a critical look at the political economy of the climate change debate.

Globalization greatly enables companies to quickly shift their operations to where costs or restrictions are lower. To meet its 2020 target, Europe reduced its use of coal 35 to 50 percent by switching to renewable energy like wind, but mainly through much higher use of natural gas obtained from Russia.

Natural gas emits much less carbon than coal. However, over the same time period, Russia increased its use of coal for domestic energy because it could make more money selling natural gas to Europe, Schreuder said.

"The World Trade Organization encourages all this to happen. Markets are a driving force behind increasing emissions of carbon," she added.

Digging deeper into these schemes reveals their inherent contradictions and unintended consequences, but they are "often promoted in lyrical win-win language", said Büscher.

Many believe the green technology transformation that the new U.N. report calls for is unlikely to succeed without a move away from the economic growth-at-all-costs paradigm that dominates nearly everyone's thinking. There is an overwhelming need to find alternatives and stop promoting an economic system that has created the crisis.

"These are incredibly complex problems and there are no simple solutions," Büscher concluded.
Posted by Next Year Country