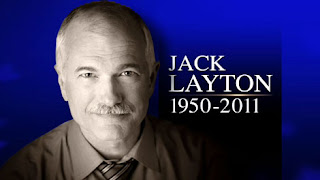 Throughout his life, Jack was a great friend to the Canadian conservation movement. Sometimes described as a “poster boy” for the environment, Mr. Layton often led the way on important environmental issues, particularly clean air and climate change. He was a forward thinker on topics like options for limiting greenhouse gas emissions and growing renewable energy.

He was behind important proposed legislation, passed by the House of Commons, that set science-based hard targets for reducing greenhouse gas emissions with the long-term goal of reducing emissions to 80 percent below 1990 levels by 2050. Jack personally championed this Climate Change Accountability Act for four years.

As head of the Federation of Canadian Municipalities in the late 1990s, he collaborated closely with WWF in a successful legal battle confirming the constitutional rights of municipalities to control the cosmetic use of pesticides — a precedent that has been applied right across Canada to this day.

His support for environmental campaigns also had a lighter side: just last February, he and other NDP MPs participated in WWF’s National Sweater Day to help raise awareness about the importance of energy conservation. Mr. Layton was also known for his personal commitment to conservation – the sight of him bicycling to work through his career was a familiar one.

I had the pleasure of meeting Jack many times over the years. He was a passionate advocate and tireless worker for our common cause. In a happy accident, I last saw Jack when we were both stranded at the Ottawa airport due to a massive thunderstorm, on Oceans Day in June. We spent much of the evening together, cheering on the Canucks in game 6 of the Stanley Cup Final. In retrospect, it’s amazing how much energy and enthusiasm he exhibited that evening. His excitement at taking on his new role as Leader of Her Majesty’s Official Opposition was then evident and now tragic. He will be sorely missed. May he rest in peace.
Posted by Next Year Country