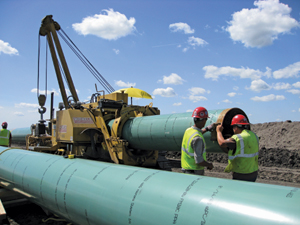 The State Department issued its final environmental review of the Keystone XL pipeline today, finding that it would bring “no significant impacts” on the environment – even while substantially increasing greenhouse gas emissions and crossing major aquifers and wetlands across the country.
By Stephen Lacey
Climate Progress,  26/08/11

The Environmental Protection Agency criticized the last two environmental reviews from the Department of State, saying they lacked adequate study on almost every major environmental issue associated with building the pipeline. But the DOS worked closely with the EPA on this report. The 1,700 mile Keystone XL pipeline would bring over 800,000 barrels of tar sands crude from Alberta to the Gulf Coast each day. The EPA estimates that carbon emissions from tar sands are 80% higher than the average crude refined in the U.S. The process of extracting tar sands oil requires strip mining, causing extensive damage to the boreal forest, creating “dead” water ponds filled with toxic chemicals, and requires four times more water to produce a barrel of tar sands oil than for conventional oil.

It seems the DOS has pulled the same maneuver as the Interior Department — admitting that greenhouse gases are a major issue, but still declaring the project environmentally sound. (Last month, Interior green-lighted Shell’s offshore drilling in the Arctic while ironically outlining the swift impacts of climate change on the region.)

From the DOS review:


[C]urrent projections suggest that the amount of energy required to extract all crude oils is projected to increase over time due to the need to extract oil from ever deeper reservoirs using more energy intensive techniques.

In spite of the increasing difficulty in extracting oil from the tar sands, the DOS estimates that greenhouse gas emissions from tar sands could stay flat in the coming years. However, a recent analysis from the Canadian government shows that emissions will likely double by 2020, cancelling out the country’s renewable energy programs.

The report does not determine a State Department decision; it is simply a final environmental review. After a 90-day public comment period, Secretary of State Hillary Clinton will issue a decision.

Secretary Clinton said she would leave “no stone unturned” in the analysis of the pipeline. But last month, the objectivity of the agency was called into question when a diplomatic cable released by WikiLeaks showed a DOS official had been coaching the Canadian government on how to better “sell” the tar sands to the public:


The cable, obtained by WikiLeaks, describes the State Department’s then-energy envoy, David Goldwyn, as having “alleviated” Canadian officials’ concerns about getting their crude into the U.S. It also said he had instructed them in improving “oil sands messaging,” including “increasing visibility and accessibility of more positive news stories.”

Writing in response to the Climate Progress story on the issue, author and activist Bill McKibben lambasted the State Department:


This is outrageous behavior by the administration–it’s the same kind of thing that is outraging the British public today. You’ve got a federal official manipulating the media on behalf of a private concern, and then going to work for that concern? This is a menage a trois of corruption, and it should outrage even people who aren’t outraged by the implications of pouring vast amounts of carbon into the atmosphere.

If you are outraged, go to tarsandsaction.org and sign up to get arrested.

Indeed, that’s exactly what people are doing. The protests against the pipeline continue at the White House this week, where almost 300 people have been arrested.
Posted by Next Year Country