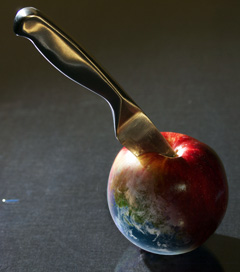 Ecocide by the "minerals-energy complex" should be faced by a broad-based opposition, focusing on sanctions against neo-colonial exploitation, and international solidarity with the communities affected.


When African National Congress youth leader Julius Malema recently proposed the mining industry’s partial nationalization – and last week asked, quite legitimately, ‘what is the alternative?’ to those in the SA Communist Party (SACP) and Business Leadership South Africa who threw cold water at him – a debate of enormous ideological magnitude opened in public, which workers, communities and environmentalists have already joined in their myriad struggles.

For those of us in the province of KwaZulu-Natal, awareness of mining’s foibles is vital for several reasons, including new scientific findings about overestimated coal industry reserves; SACP leader Jeremy Cronin’s recent useful suggestion to ‘phase out aluminum smelters’ at the vast Richards Bay port (and we might add, at Durban’s killer-manganese Assmang at Cato Ridge which alone chews a third of our city’s electricity); and the global climate summit that Durban hosts in November-December.

It is no secret that the COP17 will be embarrassing for South Africa, not only because Durban will host the demise of the Kyoto Protocol’s binding commitments, due largely to the destructive influence of the US, Japan and the European Union. WikiLeaks revealed Washington’s bad habits – bullying, bribery and blackmail – when promoting the non-binding 2009 Copenhagen Accord, a sham of a climate agreement.

Pathetically, SA president Jacob Zuma played into the hands of the major polluters as an original signatory.
Expect more UN wreckage on December 9, closing day. But that aside, the main reason that Pretoria faces embarrassment is increasing local awareness of SA’s coal-fired electricity dirty laundry. This is a result of the way that mining houses – especially Anglo American Corporation and BHP Billiton – have managed to monopolize the world’s cheapest energy while poor people are so overcharged that they face widespread disconnection.

Fighting for electricity, water and health 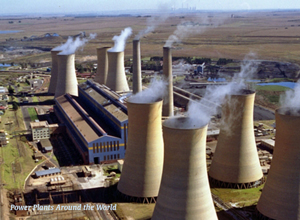 South Africa’s ‘Minerals-Energy Complex’ – a phrase coined by former Trade and Industry director-general Zav Rustomjee and British economist Ben Fine – has become a barrier to society’s balanced development and also a threat of great magnitude to the local and global environment. As last month’s diagnostic document from the new planning ministry admitted, ‘SA’s economy is highly resource intensive and we use resources inefficiently. As a result we are starting to face some critical resource constraints, e.g. water.’

Eskom is the biggest water consumer, so as to cool Mpumalanga power plants. The coal burned in the process has ruined many rivers, and so badly polluted the Kruger Park that hundreds of crocodiles have died.
The main beneficiary, whose smelters guzzle more than a tenth of SA electricity, is BHP Billiton, headquartered in Melbourne though rooted in South Africa through the Afrikaner-owned Gencor mining house. Eskom’s annual report admits BHP Billiton was given a $200 million subsidy last year thanks to apartheid-era deals, and was responsible for Eskom’s $1.4 billion loss the year before.

This is why our wealth is a ‘resource curse’. Dating back to the discovery of Kimberley diamonds in the 1860s and Witwatersrand gold in the 1880s, a handful of corporations gained power over national development policy. At one point, Anglo American and De Beers – run mainly by the Oppenheimer family dynasty – controlled almost half the country’s gold and platinum, a quarter of the coal, and virtually all the diamonds, with held critical stakes in banking, steel, auto, electronics, agriculture and many other industries.

According to the Truth and Reconciliation Commission, the mining industry’s ‘direct involvement with the state in the formulation of oppressive policies or practices that resulted in low labour costs (or otherwise boosted profits) can be described as first-order involvement [in apartheid] … The shameful history of subhuman compound [hostel] conditions, brutal suppression of striking workers, racist practices and meager wages is central to understanding the origins and nature of apartheid.’ 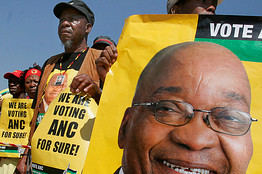 The legacy of Minerals-Energy Complex political power continues, as witnessed by the World Bank’s 2010 financing of Eskom’s new coal-fired mega power plant Medupi and other foreign finance for its successor Kusile (the world’s third and fourth largest), the energy ministry’s multi-decade integrated resource planning exercise – run by a committee dominated by electricity-guzzling corporations – and Pretoria’s contributions to global climate debates. These include the COP17, Zuma’s co-chairing of a UN sustainable development commission, and Planning Minister Trevor Manuel’s role as co-chair of the Green Climate Fund (GCF) design team, which seeks $100 billion a year in North-South flows.

Last week at a Tokyo GCF meeting, Manuel suppressed debate requested by Nicaragua about World Bank conflicts of interest, for it provides input to the huge fund as well as serving as interim trustee, against UN procedure.

Instead of paying reparations for ‘climate debt’, the GCF appears to cement existing power structures, and instead of raising funds from polluters in the North to deter emissions, potentially half of the fund might come from carbon trading (a suggestion by Manuel), which will prolong Northern corporate climate destruction. No doubt we will learn soon of GCF funding of ‘false solutions’ to the climate crisis, such as nuclear, Carbon Capture and Storage, biofuels and whacky geoengineering schemes (sulfur in the air to shut out the sun, or iron filings in the sea to create algae blooms).

Minerals-Energy Complex ecocide extends to Johannesburg’s acid mine drainage crisis. Mine tailings dams composed of waste material measure 400 square kilometers, alongside six billion tons of iron sulphide, which, exposed to air and water, creates acid mine water which drains into the water table. The combination is devastating, especially when added to the coal mine pollution further east, on the country’s best agricultural land, not to mention hundreds of thousands of workers’ silicosis and tuberculosis, traced by Durban’s Health Systems Trust to the mines.

These legacies mean that even if Malema has won the spotlight, mining and energy firms are consistently criticized by labour, communities and environmentalists. The problem so far has been divisions of interest that prevent them from coming together effectively, a problem that needs to be urgently solved, certainly before the COP17 Conference of Polluters begins. 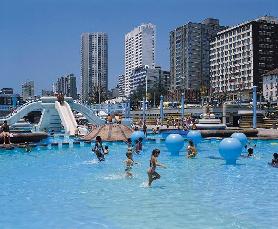 On the positive side, it is now certain that December 3 is a global day of civil society protest action, with a march against climate change culminating at the Durban beachfront – South Africa’s leading public space with unusually mixed class and race access – for a ‘going away party’ to the receding sand. What is needed next is a strategy to ratchet up pressure as protesters pass by the International Convention Centre, Durban’s City Hall and the US Consulate, and generate consensus on the next stage of commitment.

With extreme weather events worsening in recent months, who can doubt the imperative to get what Naidoo terms a fair, ambitious and binding (FAB) deal? Such a superhuman, genuinely multilateral effort has been tried once before, in the 1987 ‘Montreal Protocol on Substances that Deplete the Ozone Layer’, which banned chlorofluorocarbon (CFC) emissions by 1996, in the nick of time.

Since then, nothing else attempted by elite global negotiators aside from AIDS-medicines access – granting an exemption to intellectual property rights at the 2001 Doha World Trade Organisation summit, driven from below by the Treatment Action Campaign – has properly addressed world-scale economic, environmental and geopolitical crises. Nothing, really.

Blame the neoliberalism of the 1990s or the neoconservatism of the 2000s or Barack Obama’s fusion of the two vicious ideologies since then, but it’s usually vested corporate interests that block progress, impose austere economic imperatives (as is even hitting home for western workers from Greece to Wisconsin) which in turn generate even more desperation for ‘growth’ at any cost, and then ignore their historic responsibility for climate-change culpability.

Top US State Department negotiator Todd Stern, who has already publicly written off the COP17 on two occasions, put it plainly at the Copenhagen COP in 2009: 'The sense of guilt or culpability or reparations – I just categorically reject that.’

That bad attitude is why Greenpeace and others in society passionate about the environment are so desperately needed, putting their bodies on the line to dramatise the threats and solutions. And why unity on strategy and messaging is vital. 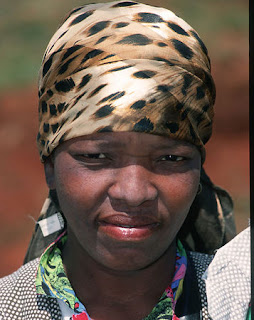 But as an Australian civil society unity initiative (‘Say Yes’) six weeks ago showed, this is not easy. Two activists at the website ‘Climate Code Red’, David Spratt and John Rice, ask tough questions about the Australian climate lobby: ‘Do the branding imperatives of large NGOs, financially reliant on e-list supporters, drive them to market themselves as separate and distinct from, and of higher standing, than other NGOs and the community groups with which they profess common purpose? Is this one reason why climate advocacy is so often chronically divided and ineffective?’

Adds Desmond D’Sa of the South Durban Community Environmental Alliance, ‘Greenpeace did a good action against Eskom, but where were they when we ran our community campaign against World Bank financing for Medupi last year? Why don’t they support local activism?’

These complaints join others about Greenpeace’s naïve climate policy messaging: supporting Pretoria’s negotiating stand in Copenhagen and encouraging Zuma to turn up on the last day even though, predictably, he sabotaged the Kyoto Protocol there; supporting SA tourism minister Marthinus van Schalkwyk to head the UN climate body though he was a laggard at home; and supporting carbon trading (what critics term ‘the privatization of the air’) even though at Durban’s massive Bisasar Road landfill, that strategy for financing methane-to-electricity has locked in environmental racism.

But in this time of urgency, the challenge is to find common cause amongst all the visitors to Durban. For in contrast to the hopelessness of a UN conference where procrastination, paralysis, pollution and profit will probably beat the interests of the people and the planet, it’s the indominable spirit of Greenpeace staff and those like them, willing to take huge personal risks for the sake of the planet and people, that will shine through.

One reason is the host locale, Durban, whose 20th century legacy of heroic figures willing to make great sacrifices includes Dube, Luthuli, Naicker, Meer, Biko, dockworkers, community activists, women’s groups, the Diakonia faith community, the Mxenges, Turner, Brutus and so many others. The most compelling for climate politics may well be Mahatma Gandhi, who a century ago in his Phoenix settlement in northern Durban built up a tradition that needs revival today: Satyagraha, putting bodies on the line in search of truth, to shake the system and avert its destructive course.
The same spirit of civil disobedience is being invoked in Washington against the Canada-US tar-sands/pipeline complex in late August, with a host of leading climate activists including Maude Barlow, Wendell Berry, Tom Goldtooth, Danny Glover, James Hansen, Wes Jackson, Naomi Klein and Bill McKibben (http://www.commondreams.org/view/2011/06/23).

The desire of those promoting climate justice in Durban is to evoke that earlier round of protests at the SA embassy in Washington a quarter century ago, which conjoined international solidarity to militant activism in the townships and in turn led to sanctions and the fall of a regime. This one is bigger and will fall more slowly – but for our survival the Minerals-Energy Complex will have to take the same course as apartheid.

Patrick Bond and Khadija Sharife are at the University of KwaZulu-Natal Centre for Civil Society: http://ccs.ukzn.ac.za


Patrick Bond
Patrich Bond is political economist and activist who directs the Centre for Civil Society at the University of KwaZulu-Natal in Durban, South Africa. He is the co-editor (with Rehana Dada) of Trouble in the air: Global warming and the privatised atmosphere (TNI/Centre for Civil Society, 2007)
Posted by Next Year Country