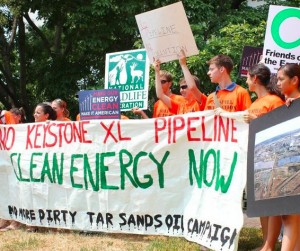 On August 20, 2011, we will begin our demonstration in front of the White House, practicing peaceful civil disobedience to oppose to the Keystone XL tar sands pipeline. This is a challenge.

We're already on our way to making this the largest collective act of civil disobedience in the history of the American climate movement - over 1,000 people have signed up to join the sit-in. That's an impressive number of people coming together to do something hard - take a legal risk in Washington's swampy heat to stop this monster project. We're now aiming to double that number to 2,000 before the action begins in August.

But even this might not be enough. The tar sands industry is upping their pressure: just this week they bought up more high-powered Washington lobbyists, and are ramping up their PR machine to push President Obama into making the worst climate decision of his Presidency.

Just the other day, Harriet, a New Jersey mother of two reached out with a blog post she wrote about visiting her native Alberta, where she saw the tar sands up close:

"A week after I visited the Canadian Tar Sands 'to see for myself' what that area is all about, I received emails from several of my friends and colleagues, encouraging me to join them in Washington, DC for a 'peaceful protest' against the proposed pipeline that would carry tar sands oil from Alberta, Canada to Texas...

I am signed up for a Tar Sands protest at the White House in Washington, DC that has the potential to get the protesters arrested. Do I feel this cause is important enough to take these risks? YES I do. I hope my kids will be proud of me, and that it builds on my legacy and actions to try to raise awareness to the growing reality of climate change that is threatening my children's future and mine. I want to WAKE UP my neighbors, friends, colleagues and total strangers by showing them that a mom of two `tweens thinks that these risks are worth it."

stoptarsandspress@yahoo.com
Posted by Next Year Country