By Paolo Bacigalupi
On Earth magazine 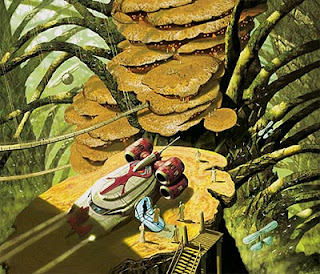 Welcome to the Greenhouse
Edited by Gordon Van Gelder
OR Books, 348 pp., $17
If you run your hand down the shelves of a bookstore, you'll find a wide range of contemporary fiction, categorized by reader fetish and with genres kept carefully separate. This one is "mystery," that one a "romance," another is a "thriller," and that one over there? Well, it's "literary." But whether we're talking about dragon tattoos or Da Vinci's codes or fraught Thanksgiving reunions, contemporary novels all seem to share a certain binding principle. Even as they try mightily to distance themselves from one another, in fact, they're all the same genre. They're historicals.

While we debate what constitutes fictional trash and hash over the trendiness of present tense, great events are afoot. Carbon dioxide concentrations are rising. The world is changing. The stories that purport to describe our contemporary world are becoming a bit like mammoths in glaciers. They're nicely detailed, but they're also extinct. Even as these novels explore families and politics, landscapes and nature, murders and liaisons, global mean temperatures continue to jag upward. Permafrost melts. The ocean turns acid. Polar bears mate with grizzlies. Bark beetles chew their way north to new timber.

The tide creeps up the beach and over the dikes.

As Elizabeth Kolbert of New Yorker fame writes in her foreword to the short story collection Welcome to the Greenhouse, climate change is already in motion. The CO2 we've already dumped into the atmosphere means that we're on a train rushing toward a strange future. There's no stopping it. Our lives here and now have become historical -- a snapshot sepia-tone moment between the way things were before and the way they will be after.

But where are we going? And how might a storyteller engage with it? The answer lies in another part of the bookstore, that much-maligned ghetto of rocket ships and Barbarella, robots and Prime Directives: science fiction.

Despite its often silly pop culture referents, science fiction is actually the only literature with the tools for the job. The only genre that gathers up present data and then lunges forward into story, extrapolating the shape of a world that doesn't yet exist but looms over the horizon.

When it works, science fiction provides a BabelFish translation not only of our potential futures but also of our present. George Orwell gives us Big Brother, and William Gibson gives us cyberspace. As pure prognostication sci-fi often misses, but as a window into possibility and as a builder of vocabulary to describe the changes humans wreak upon their surroundings, it offers a chance at understanding the implications of our present in a way that other genres do not.

So how does science fiction do when it turns its gaze from interstellar travel to focus instead on global warming?

In Welcome to the Greenhouse, the editor Gordon Van Gelder assembles 16 science fiction authors and asks them to tell the story that is rendering all our other stories obsolete. The book provides a wide range of styles as well as a list of novels for further reading.

But first, a moment of candor. Whenever I hear words like climate change attached to the word fiction, I admit I want to flee. The topic reeks of sincerity, heavy-handedness, and didacticism. I expect to be depressed. Will it really tell me anything that I haven't already chewed through in nonfiction form? Will it traffic in cliché? Will it recycle the Mad Max apocalypse scenarios of dog-eat-dog that always seem to ride along in the sidecar of collapse, whether we're talking about nuclear devastation or biological plague or peak oil, or zombies dashing about moaning for brrraaaaaiiiiiiiinnnsssss?

Will it have Bandits?

People being REALLY MEAN TO EACH OTHER?

Certainly some of the stories in the collection tread this post-apocalyptic ground where scarcity and lawlessness are assumed to go hand in hand. Shotguns and ancient M-16s share equal space on the page with starving children and those few brave souls who hold tight to the threads of unraveling civilization. Some of these apocalypse stories are well drawn, but as windows into global warming, they're so steeped in cinematic clichés of collapse in general that they don't have much to tell us about the implications of climate change in particular.

That said, there are pleasures in this volume, and even more surprising, there are a couple of laughs. Early in the book, Matthew Hughes tells the story of Bunky Sanson, the prototypical Competent Man of science fiction's own dusty history, a man who can invent his way out of anything. Bunky goes after climate change with all the optimism of today's industrial giants or geo-engineering proponents. As the farce closes, Bucky is devoured by massive, alien, dinosaur-like birds, which agree with him that global warming is in fact "not a problem."

Other stories offer humane observations of people and a changing landscape, as in Judith Moffet's "Middle of Somewhere." After a tornado levels an isolated farmstead, a young girl and the woman who mentors her work at survival while waiting for help to arrive. The story spends most of its time focused on what's in the pantry and wounded baby birds, but climate change lurks around the edges. Tornado Alley has diversified, expanding into Hoosier Alley and Dixie Alley, and tornadoes are becoming more commonplace as well as moving farther north every year. 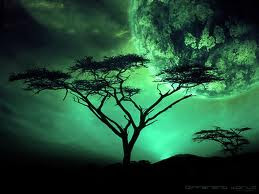 Bruce Sterling provides a poignant political fable of a sustainable society where people "would spill their own blood before they would spill a drop of water," and whose closed-system greenhouse survival depends on "pergolas, sunshades, reflectors, straw blankets, pipes, drips, pumps, filters, cranes, aqueducts," and, above all, "the Cistern." They examine the lost artifacts of history, occasionally reviving devices such as the "external combustion engine" to watch its "tremendous, headlong, urgent whizzing speed." No one knows why the engine spins, or to what purpose, but they know that it destroyed things "so completely that we, their heirs so long after, can scarcely guess at the colossal shape of the world that they wrecked."

And there are others. Ray Vukcevich's "Fish Cakes" shows us a future America where people hide from their changed climate and even the most basic physical facts of their world with the help of Second Life-like social applications that create a virtual world more palatable than the one immediately around them. "The Men of Summer," by David Prill, is a fable about a world where the shallow-sweet romances of summer never end, because summer itself never ends either. George Guthridge's "The Bridge" provides a wrenching portrait of Alaskans and their collapsing culture as the seas rise around their island chains, and outsiders pay money to ride the emotions of loss that the natives experience.

In "Eagle," by Gregory Benford, ethics, ecoterrorism, and geo-engineering collide around a last-ditch attempt to control global warming by dumping hydrogen sulfide into the air above the North Pole, and in Joseph Green's "Turtle Love" we watch a family as their house is condemned by legislation akin to eminent domain that determines which areas are worth protecting with a seawall.

Some stories feel clunky. A few have that whiff of infodump preachiness that often accompanies an attempt to compress a complex topic into the confines of a short story. But unlike most of what we call contemporary literature, they are also intensely engaged, not with the future, which is what we all imagine science fiction is worried about, but with the present. They're asking questions about the story that will shape all our other stories from here to forever. They don't smell historical; they smell of a newborn creature, wet and ungainly, uncertain of its ultimate development, but also a start. And a genuine one, at that.

Toward the end of the collection, Paul DiFilippo gives us another moment of cheer in "FarmEarth," where people micromanage and try to heal our very damaged Gaia through video-game interface. They jockey swarms of oil-eating bacteria through the ocean deeps and vaccinate wild horses and grow carbon-sink forests in an attempt to mitigate human damage to the planet. A group of kids, bored with their menial FarmEarth tasks, hack their way up to master level so they can do the really cool jobs like draping skyscrapers with vertical farms and swooping through the stratosphere to sequester airborne pollutants. And of course, hijinks ensue. 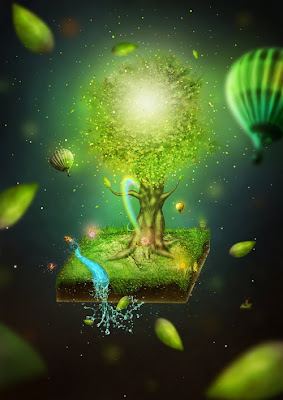 The story is fun and sweet, and it's also frightening how much we cling to a story like this in a tome about global warming. It seems to affirm that children will still be children and that even in a devastated future, thrilling antics await. We want that affirmation. We are desperate and grateful for it. And our storytelling methods respond to that basic human hunger.

Fiction, by its nature, is optimistic. Even the most apocalyptic of the scenarios in this book contain people. Fiction is an artificial construct in itself, in that it presumes that there is a story to tell, with its protagonists and antagonists and arc of discovery, or learning, or change.

My biggest fear as I turn the pages of this book is one left unspoken -- that fiction itself is extinct. That in the future there will simply be no tale to tell.
Posted by Next Year Country