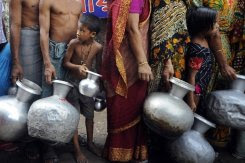 A report prepared for non-government organizations said Wednesday that corporate interests have gained too much influence over UN water policies, creating potential conflicts of interest in addressing the global water crisis.

The report prepared for the Council of Canadians, the largest NGO in Canada, and endorsed by 139 organizations was sent to the UN and opposed "the increasingly widespread lobbying of the United Nations by transnational water corporations."

The organizations said the UN should reject an application for official consultative status from the main corporate water lobby association, known as Aquafed.

So-called consultative status "is a way to hear the voices of social movements and civil society around the world. It should not be allowed to become a way for corporations to try and influence global water policy," said Council of Canadians chairperson Maude Barlow.

"It is important that we let the UN know this is unacceptable."

"No one is opposed to the United Nations working with water corporations to encourage conservation and the search to reduce the world's collective water footprint," Barlow said in the report.

"The concern is that the relationship between the highest levels of the United Nations and the private water sector legitimizes the growing influence of these corporations on policy, both at the UN and at the nation-state level, which in turn promotes a private market system for water delivery and access at the expense of the public and the poor."

Julie Larsen, author of the report, said that "based on my review of water governance at the UN, I feel that the imbalance in power, influence, and money that come with engaging the private sector must be addressed head-on to prevent serious conflicts of interest."

The report said the UN's Economic and Social Council (ECOSOC) should be a forum "that is free from corporate conflicts of interest."

"To surmount the global water crisis, the UN must assure a formal, transparent and democratic space in which governments can advance the best possible sustainable strategies to protect water as a public good," it said.

The UN General Assembly last year recognized access to clean water and sanitation as a human right, a move hailed by water advocates as a momentous step toward a future treaty.

It expresses deep concern that 884 million people lack access to safe drinking water and that more 2.6 billion do not have access to basic sanitation.
Posted by Next Year Country