In defense of human nature

Steve Leigh looks at a new documentary which makes the case that human beings can live together on the basis of cooperation, not competition.
Socialist Worker
May 10, 2011 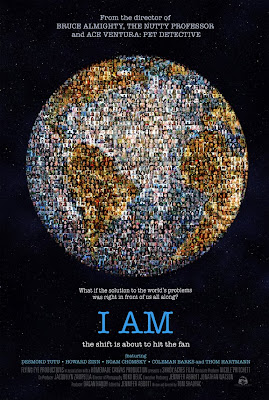 TWO MOVIES opened recently addressing human nature and egoism versus cooperation: Atlas Shrugged, based on extreme capitalist Ayn Rand's book, is a call for selfishness, competition and egoism. Opening in theatres at the same time, Tom Shadyac's I Am supports love, cooperation, egalitarianism and democracy.

I Am is humorous (as can be expected from the director of Bruce Almighty) as well as being stunningly beautiful, uplifting and riveting. It calls for hope in the ability of humans to make a better world. It starts out asking two fundamental questions, "What is wrong with our world?" and "What can we do to make it better?"

The message of the film is grounded on science, not just hopeful wishes. Shadyac notes that Charles Darwin, in The Descent of Man, refers to love 95 times and "the survival of the fittest" only twice. Humans don't have the strength of our primate relatives or the claws or teeth of other species. Our survival from the beginning depended on cooperation. Thus, human beings are actually hard-wired for cooperation, not competition.

"It was a revelation to me that for tens of thousands of years, indigenous cultures taught a very different story about our inherent goodness. Now, following this ancient wisdom, science is discovering our hardwiring for connection and compassion," says the director.


I Am, a documentary by Tom Shadyac.
In fact, this drive to cooperation and democracy is manifested in other species as well. Shadyac explains the movements of herds of animals or flocks of birds as a natural democracy--a form of voting by wing beats and ear movements.

Because of our very nature, Shadyac notes, "Humans actually function better and remain healthier when expressing positive emotions such as love, care, compassion and gratitude, versus their negative counterparts...This is why, in some native cultures, gross materialism is equated with insanity." Shadyac shows this in modern times by juxtaposing images of ornate mansions with homeless people digging through garbage to survive--which he considers the height of absurdity.

SHADYAC SHOWS that what is wrong with the world is the domination of the drive to accumulate wealth and compete with and dominate each other, rather than cooperating to meet everyone's needs.

He tries to get at why this state of affairs exists by interviewing prominent intellectuals in science, philosophy, art, psychology and political activism--including Noam Chomsky and the late Howard Zinn. All of these interviews are interesting and back up the director's main points. Zinn's short comments call for collective struggle as the way to change the world--even if that struggle starts with individual acts. The point is illustrated with documentary footage from the civil rights movement.

In spite of these important interviews, the film never fully answers the questions it poses. How did compassionate, egalitarian societies turn into competitive, domineering, hierarchical ones? What is the role of the economic system in preserving anti-democratic practices? How can we transform the structures that create the problems that the film outlines?

Shadyac's tentative answer to the question of "What can we do to make it better?" is to live a life more in accord with basic human principles and influence people by example. He has given away much of his wealth, lives simply and has set up a foundation to begin to help meet people's needs. The other solution is to promote understanding of the principles his film outlines.

Though Shadyac doesn't provide a political strategy for social transformation, the movie provides plenty of evidence for the scientific basis for the workability of a society based on equality, democracy, connection and compassion. He debunks the "human nature" argument against progressive social change by showing an extremely optimistic view of human nature (some might argue it is a little too optimistic). He does so in a humorous, engaging, beautiful way.

In this time when big business and politicians are arguing that society cannot meet people's needs and that the only way to organize society is by extreme competition and individualism, this movie provides an inspiring, uplifting and gorgeously presented antidote.
Posted by Next Year Country