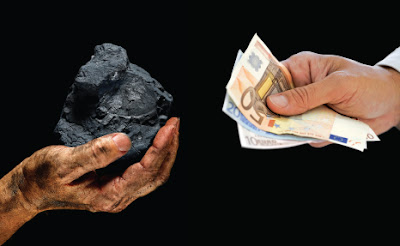 Despite its popularity among advocates of market solutions to global warming, carbon trading cannot produce the quantitative and qualitative changes that the world needs

Daniel Tanuro is the ecological correspondent of La Gauche, newspaper of the Belgian Socialist Workers Party. This is the text of his talk at the Conference on the future of Greenhouse Gas Emissions Trading in the EU organized by the Slovenski E-forum, Focus and the National Council of the Republic of Slovenia, Ljubljana, on March 21, 2008

Fundamental Inadequacies of Carbon Trading for the Struggle Against Climate Change

This contribution identifies 5 fundamental reasons why carbon trading is inadequate for the struggle against Climate Change. It focuses in particular on the European Emission Trading System (EU-ETS) but most of the conclusions are generally applicable.

1. Carbon trading is a source of windfall profits for polluting sectors. They invest little or none of that profit in low carbon technologies, and instead try to slow or delay the implementation of climate policy.

The over-allocation of quotas in the phase 1 of the EU-ETS provided the steel sector a windfall profit of 480 million Euros at the end of 2005. In the same period, RWE, a German utility, made a huge profit of 1.8 billion Euros. Even the oil businesses made windfall profits: Esso (£10 million), BP (£17.9 million), Shell (£20.7 million).

Little or none of these windfall profits were invested, in low carbon technologies or research. The European steel industry, for instance, invests only 45 million Euros/yr in the ULCOS research program, which is financed at 50% by the Commission. The German RWE, number 3 in power production on the EU market but number 1 in GHG emissions, is building the biggest lignite power plant in the world.

Consequently, I would argue that the windfall profits generated by the quota system strengthen big carbon emitters that have a strategic interest in slowing or delaying climate change mitigation and in continuing to burn fossil fuels as long as possible.

It is unlikely that the proposed auction of the quotas in Phase 3 of the EU-ETS will put an end to these windfall profits. This is because there will be a relative abundance of quotas at the beginning of Phase 3, due to various factors: banking from the 2nd to the 3rd phase, free (over)allocation of quotas to new sectors entering the system, and abundance of carbon credits. Consequently, quotas will be relatively cheap in the first years, after which the price will rise, providing windfall profits to speculators.

2. Carbon trading is a new source of social inequality, and thus of potential social unrest that could thwart the climate change mitigation policy.

Let me illustrate this with an example. Arcelor, number one in the global steel sector, decided in 2005 to close a blast furnace in the Liège region of Belgium. Two years later, the new group ArcelorMittal decided to relaunch production of pig iron, and restart the blast furnace. The problem is there were not enough quotas left – they had been distributed to other businesses. ArcelorMittal refused to use its own quotas – it has a lot – and blackmailed the unions with a threat to cancel the project if it did not get concessions, so the government decided to sell Kyoto units in order to buy quotas which it gave to ArcelorMittal. The gap in price between the Kyoto units and the quotas will be covered by the public budget. As a result, the Walloon government will have to reduce spending in other areas, and the quotas reserved for new entrants are now insufficient for some of the investments planned by other economic sectors.

This example shows clearly how carbon trading creates new sources of division among workers, generating specific threats regarding jobs, wages, benefits and work conditions. The risk is that labor will oppose climate policy in name of social justice. In my view, if climate change mitigation means more unemployment and competition between workers, it will be a new source of social unrest that could undermine climate change mitigation and make it even more complicated.

3. Carbon trading is also a source of North-South inequality that could undermine climate change mitigation policy. In particular, linking emissions trading and the Clean Development Mechanism puts the principle of “common but differentiated responsibility” at risk.

As you know, under the Clean Development Mechanism, “clean investments” outside the EU can provide carbon credits to the EU. The linking directive makes these credits equivalent to quotas in the EU-ETS.

At the moment, there is a ceiling on the import of carbon credits. In phase 2 of the EU-ETS, this ceiling is 280 Mt/yr. Since the emissions reduction during Phase 2 is about 130 Mt/yr, this means that the EU could completely fulfill its commitments using credits, without reducing its own emissions at all. In other words, there is actually no ceiling.

In its new proposals for 2013-2020, the Commission allows polluters to bank credits from Phase 2 to Phase 3. If there is no international treaty, Brussels estimates that Phase 2 credits could cover about 33% of the Phase 3 reduction effort. If an international post-Kyoto treaty is approved, the EU will set an emissions reduction of 30% instead of 20%, but 50% of the additional reduction can be made up of carbon credits.

This means the EU is evolving in the direction proposed by Sir Nicholas Stern. The Stern Review proposed to cancel any quantitative ceiling on the CDM and to extend CDM eligibility to the building of nuclear plants and to the protection of existing forests against deforestation and degradation. (This extension to forest protection was adopted in Bali). According to Stern, these changes could multiply CDM activity by 40. Under this scenario, 50% of the global mitigation effort would be done in the South, even though the South is responsible for no more than 25% of global warming. Investors from the North will reap considerable profits and cheap carbon credits.

I leave aside the well-documented fraud, corruption, abuses and the so-called “low hanging fruits effect” that characterize the Clean Development Mechanism and that will inevitably characterize any climate strategy based on it, to ask one decisive question: in this situation, what remains of the “common but differentiated responsibility”, a fundamental principle of the United Nations Framework Convention on Climate Change? What remains in practice of the Kyoto stance that CDM and JI should only be used as “complements” to “domestic measures” in the developed countries? These in my view are very important equity questions that could also complicate and undermine the struggle against climate change.

4. The allocation of emission rights amounts to an unprecedented distribution of property rights in the carbon cycle and its regulation, and thus on life itself. This is socially and geographically unfair.

5. Because it is a purely quantitative measure, cost-effectiveness can not take into account the qualitative aspects of the essential energy revolution, nor its global rationality on the long term.

The struggle against climate change involves quantitative and qualitative objectives that must be reached globally within a very short time.

The qualitative objectives can be summarized as an energy revolution, in other words the transition from a centralized, inefficient and energy-wasting system based on fossil fuels to a decentralized, highly efficient and conservationist energy system based on solar energy in different forms. This has implications for all society, not only industry and the utilities, but also for land management, transportation systems, crop-production, leisure, etc. What is needed is a profound and global transformation, within 50 years.

Transitional measures towards this new energy system must be consistent with the long term objectives. This requires a global approach and qualitative changes, including radical changes to the existing productive apparatus.

The problem here is that quality can not be taken into account by cost-effectiveness, which is a purely quantitative measure. In the carbon market, for example, one ton of carbon absorbed by a tree-plantation is to the same as one ton carbon not emitted by a factory that burns fossil fuel. The only difference is price. If the first is cheaper than the second, the market will choose the first. In other words, market instruments based on price can not see the qualitative difference between tree-planting and the phasing-out of fossil fuels as mitigation strategies Quantitative measures tend to orientate the climate policy towards non-structural measures rather than structural ones.

The Stern Review provides interesting examples showing that cost-effectiveness can be inconsistent with a global approach that takes into account the needs of humanity as a whole. According to Stern, cost-effectiveness will permit a rational phasing of mitigation measures, beginning with the cheapest solutions like forest protection (5USD/tcarbon) and biofuel production, for instance. But we see clearly now that massive biofuel production, although rational from the partial and quantitative point of view of cost, is actually totally irrational from the global point of view of basic human needs.

For similar reasons, no qualitative shifts, such as abandonment of useless production or technologies, can be achieved easily, if at all, in a competitive framework dominated by the existing carbon intensive productive machinery.

It is very unlikely that the IPCC targets can be reached in time using emissions trading and market mechanisms. These mechanisms are inappropriate to the global, qualitative objectives that need to be achieved and to the structural transformation of productive apparatus that must occur in a very short time, if dangerous climate change is to be avoided.

Their social and economic effects, in both North and South, will make the transition more complex and chaotic. They also imply an unprecedented appropriation of natural resources (carbon, its cycle, and its regulation) whose social and “civilizational” implications have not been taken into account, despite their immense importance.

What is needed is an approach that combines the following elements:
This alternative approach should be viewed in the broader context of a global climate mitigation strategy that fully respect the “common but differentiated responsibility” principle and the right of all people on Earth to emit carbon equally.

As a last word, let me state that the profound transformation of world society that is necessary to avoid catastrophic climate change is above all a social and thus political question: real democracy, climate justice and social justice in general will be essential for its success.
Posted by Next Year Country

Email ThisBlogThis!Share to TwitterShare to FacebookShare to Pinterest
Labels: Cap and trade