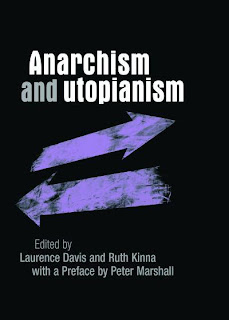 Many years ago, Lewis Mumford wrote, in The Story of Utopias, that “Utopia has long been another name for the unreal and the impossible. We have set utopia over against the world. As a matter of fact, it is our utopias that make the world tolerable to us: the cities and mansions that people dream of are those in which they finally live.”

As many of the essays in this volume note, because of the association of “utopia” with the “unreal and the impossible,” “utopianism” has an ambiguous legacy. On the one hand, those who are critical of  movements for social change often condemn them with the charge of utopianism; and, on the other hand, as Peter Marshall notes in his preface, “Utopian thinking and reverie have been with us… ever since our ancestors on the African savannah first lifted up their heads and wondered what kind of society might be over the horizon or on the other side of the mountain range.” Similarly, anarchism has sometimes been “tarred” with the utopian label.

What makes this volume—which focuses on the relationship between anarchism and utopianism—particularly compelling is that its contributors include both those who attempt to distinguish anarchism from utopianism, in hopes of escaping the label, and those who proudly claim the utopian label. The inclusion of both advocates and critics of utopianism is but one example of the diversity of the contributors to this intriguing anthology.

The essays are, indeed, very diverse, ranging from explorations of Daoism in ancient China to the politics of love and desire in late Nineteenth Century Britain and the mid-late Twentieth Century US; examinations of literary utopias; and (conflicting) presentations of the place of emotions in anarchist and/or utopian theorizing.

While the topics are varied, and the approaches even more so, they are all linked, as Laurence Davis rightly points out in his fine introduction, by the “idea of speaking/living/being utopia as a manifestation of the anarchist emphasis on the inextricable interrelationship of means and ends.” And all of these contributors question the received wisdom of our time that capitalism is here to stay, and is, in effect, the “only game in town.” While some of the contributors are more hesitant than others to offer alternative visions (perhaps for fear of being labeled “utopian”!), all begin from a critical standpoint vis-à-vis dominant relations of economic, political, and gendered power.

The volume is arranged in five sections: the first offers an historical and philosophical overview; the second has two essays on antecedents of the anarchist literary utopia; the third consists of four chapters exploring anti-capitalism and the anarchist utopian literary imagination; then follow three chapters on free love, anarchist politics and utopian desire (my favorites!); and the final section contains four concluding essays on contemporary anarchist politics. One aspect of this volume that differentiates it from other anthologies, and that I found particularly appealing, is that the essays are all relatively brief: 10-20 pages, on average. The authors tend to present their arguments in clear and pithy prose, which makes these essays accessible to academic experts and “lay” readers/activists alike.

John P. Clark’s introductory essay takes the reader directly into the conflict between the dominating/repressive and the creative/expressive/libertarian dimensions of utopian thought (especially in literary contexts). In this respect, his contribution both introduces and manifests the tensions about utopianism that are explored throughout the volume. Clark argues—as do many of the contributors— echoing Mumford, that there is a prefigurative dimension to both anarchist and utopian politics; that is, “utopia is present in all the creative play of energies, in spiritual and material voyages of discovery, and, of course, in everything touched by the transformative imagination… Even if it can never be attained, utopia is already present or it is a fraud.” Thus, this essay provides a compelling entry into the complexities that are also explored in other chapters in the volume.

The two essays in the section on antecedents of anarchist literary utopia were, to this reader, at least, rather less accessible than the rest. Perhaps because I am less familiar with the historical contexts (particularly of Rapp’s essay on radical Daoism “re-examined in light of the Guodian manuscripts”), the articles sometimes felt as if they were beginning “in medias res.” Some readers might well benefit from a bit more historical contextualizing. But the arguments the authors raise about the complexities of utopian visions are certainly clear, and relevant to contemporary movements.

Some of the contradictions—or at least differences of opinion—among the authors and within the volume come through clearly in the chapters in the sections on the anarchist utopian literary imagination and on free love and radical politics. Indeed, although the first section seemingly focuses on literary genres—and the essays certainly begin with literary utopias—they tend to range rather far beyond, including anthropological, psychological and historical analyses and perspectives.

There is an intriguing common thread running through these essays, which is brought to the fore more directly and explicitly in the fourth section: namely, explorations of the place of desires and emotions in utopian theories and practice.

Thus, Nicholas Spencer’s essay on B. Traven and Pierre Clastres, and Gisela Heffes’ on the “political implications of emotions,” highlight not only different forms of power (coercive vs. non-coercive), but also the disruptive effects of desires and emotions in would-be utopian/anarchist contexts—a theme that Dominic Ording also explores in his discussion of post-Stonewall gay liberation manifestos.

Taking a different tack, fascinating chapters by Judy Greenway and Brigitte Koenig (found in the section on anarchist politics and utopian desire) explore late nineteenth and early twentieth century experiments in free(r) love—both historical and literary—and suggest ways that desires and emotions, while potentially destabilizing, can also point the way to new possibilities. Nevertheless, while Ording’s essay, drawing on early post-Stonewall gay liberation manifestoes, did a fine job of exploring both the utopian promise and complex realities of sexual liberation, I was struck by the absence in it of a feminist awareness and sensibility.

No doubt, the essay reflects the perspectives of the gay male activist-writers of the time, who believed themselves to be inventing new modes of being in the absence of any models. That they were ignorant of contemporary radical feminist efforts to re-imagine love, desires, commitment, etc. was one thing; that Ording fails to mention those efforts is another. It is not that late 60’s radical (and lesbian) feminists had all the answers either; but at least they, too, were struggling with the questions. It would have been valuable to note the disjuncture, the relative lack of communication, between groups that were attempting similar utopian
explorations. 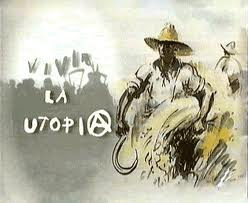 The four essays in the final section bring us back, directly, to the tensions and the creative possibilities in the confrontation of anarchism with utopianism. Whether in explorations of the place of education within the anarchist/utopian project or in examinations of the possibility of dissenting action within contemporary advanced capitalist (or post-capitalist) industrial society, these essays make clear that anarchist and utopian perspectives have much to offer us, particularly at moments that seem as politically bleak as our own. I found Uri Gordon’s concluding essay particularly compelling. He confronts head-on the claim that the “type of presenttense utopianism” explored in the volume “necessarily leads to abandoning the thankless but necessary work of building a mass revolutionary movement...?”

To this question, he offers two (partial) answers. The optimistic one is that it is precisely the building of alternative spaces, the practice of prefigurative politics, that offers the strongest argument for joining a movement for social change. The “pessimistic” response is that “a lack of belief in revolutionary closure becomes a strength rather than a liability; having let go of long-term utopian aspirations, activists are already partially equipped with the mental and emotional resources they need to carry on with their work despite the bleak prospects they might anticipate for global society in the coming decades.” In short, despite the dystopian conditions of contemporary life in the West, the need for utopias—and, in particular, anarchist-inspired utopian thinking—has never been greater. While this book does not offer us any blueprints—and, in fact, insists that anarchism is not about offering blueprints—it does offer us many compelling stories, as well as possible grounds for the hope that change is possible. And that is no small thing.

About the reviewer
Martha Ackelsberg is the William R. Kenan, Jr. Professor at Smith College. Her teaching, research and writing all center on the nature and structure of political communities, and, in particular, patterns of power and participation within them. She is the author of Free Women of Spain: Anarchism and the Struggle for the Emancipation of Women, and Resisting Citizenship: Feminist Essays on Politics, Community, and Democracy. Her email is mackelsb@smith.edu.
Posted by Next Year Country

Email ThisBlogThis!Share to TwitterShare to FacebookShare to Pinterest
Labels: Books, Marxism and Theory