The International Response to Climate Change 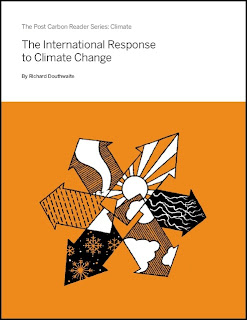 Even if its concentration of greenhouse gases was stabilized at the current level, Earth’s lower atmosphere would continue to warm.

The nations of the world have agreed that climate change is the most serious threat facing humankind. Before they can develop a joint plan to deal with the problem effectively, however, they must agree on the maximum level of greenhouse gases they should risk allowing in the atmosphere.
The Challenges We Face
The world has warmed by approximately 0.7 degree Celsius in the 200 years since fossil fuels began to be used on any significant scale—but the warming has not been uniform. The biggest temperature rises have been around the North Pole, and some worrying self-reinforcing feedbacks have already developed. For example, the Arctic ice has been melting unexpectedly rapidly, increasing the rate at which the planet is warming because the white ice that reflected solar energy back into space has been replaced by dark, heat-absorbing sea. Similarly, the melting of the permafrost in Russia is now releasing large amounts of methane, a powerful greenhouse gas, into the atmosphere.
Even if its concentration of greenhouse gases was stabilized at its current level, Earth’s lower atmosphere would continue to warm by at least another 0.7 degree Celsius. This is because the full heating effect of increased carbon dioxide in the atmosphere—currently around 390 parts per million (ppm)—takes some years to overcome the considerable thermal inertia of Earth’s climate system.

The leading American climate scientist, James Hansen of NASA’s Goddard Space Institute, points out that the Arctic ice began to melt significantly in the 1970s and suggests that a concentration of 300–325 ppm of carbon dioxide might be necessary for the ice to increase again. Professor John Schellnhuber, the director of the Potsdam Institute for Climate Impact Research in Germany, thinks that almost any concentration above the pre-industrial level of 270 ppm might be too much. He told the Guardian in 2008 that even a small increase in temperature could trigger several climatic tipping points:

Nobody can say for sure that 330 ppm is safe…. Perhaps it will not matter whether we have 270 ppm or 320 ppm, but operating well outside the [historic] realm of carbon dioxide concentrations is risky as long as we have not fully understood the relevant feedback mechanisms.1

If these experts are right, two things must be done to stop runaway global warming. One is that every ton of carbon dioxide that humans release by burning fossil fuels and clearing forests from now on must be recovered from the air and sequestered safely in the ground. The other is that a lot of past emissions must be recovered too.