Green Party blues (and how to help save the country) 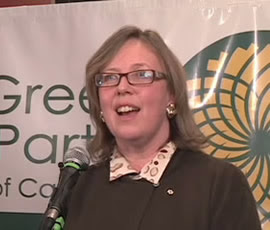 But it is not as simple as enjoying Elizabeth score points in a debate. The Green Party has in fact been playing less and less of a role in Canadian politics over the past two years. You don’t often hear from the party or its leader on key issues. May seems to spend more of her time in her riding than in Ottawa where the press gallery is – no doubt part of her effort to get a seat in the election. Fair enough, I guess, as not having a seat is a huge problem for her and her party. But in other elections, the Greens have approached the dropping of the writ with polling in the 7% – 10% range, pretty good for a party with limited resources.

On election day, however, the Greens every time drop down to something between 5.5% and 6.5% as a lot of people remember that history is made by those who show up and the Greens never show up where history is made: in the House of Commons.

But this time around the party entered the election period well below their historic highs (they once passed the NDP in a national poll, 13% to 12%). Since before the writ was dropped and up to today they have been polling (in the Nanos polls, still the most reliable and consistent) between 3% and 4%.

That is a very big problem for May. If this election plays out like the last three, the party could well drop below that percentage. That would put the Greens firmly in fringe party territory. May and supporters of proportional representation have always pointed out that at 6% or 7% of the vote, the party would be entitled to between 18-21 seats in the House of Commons – a serious presence. But once you get below the 5% threshold, in most places with proportional representation, you get nothing. That is the standard cut-off. So unless the party can suddenly burst through that 5% threshold they have a weak argument for being taken seriously. They have a budget of almost $2 million a year just from government transfers – there’s no excuse for them not being higher in the polls if they were being effective.

It is also no secret to any observer of federal politics, that the Greens do well because they are essentially a franchise. That, in combination with the federal funding provided political parties, dragged the party from obscurity to visibility. No other party in Canadian history has had the advantage that accrues to the Green Party because of its name. People had many pre-conceived ideas of what a Green Party stood for long before the party came on the scene here. Most of those ideas were positive and progressive. So, as long as there is a name on the ballot with the party’s name beside it, it gets a certain number of votes from people who know nothing about the party, its actual policies or its local candidate. That is why the Greens have for several election now run people in every riding – they get $2 for each vote and the strategy more than pays for itself. But no other party is as thin on the ground as the Greens in terms of having active riding associations. They get the money whether they have active riding associations or not.

There are other reasons the party is not doing as well as it should be – internal dissension, an eclectic mix of policies (including right-wing policies on taxation), and a membership that for the most part actually rejects politics as it is practiced in this country, a fact that makes it a bit schizophrenic and therefore not as effective on the ground as its numbers might suggest.

If the Green Party had really been pushing the other parties on environmental issues more effectively over the past few years it is my guess that the little band of corporate bureaucrats – “The Consortium” – who excluded her would have had to make a different decision.
Posted by Next Year Country