Black Tide: the Devastating Impact of the Gulf Oil Spill

A searing look at the human face of BP's disaster in the Gulf
By Antonia Juhasz
(Wiley, April 2011)
Order it now from your local bookstore or online. 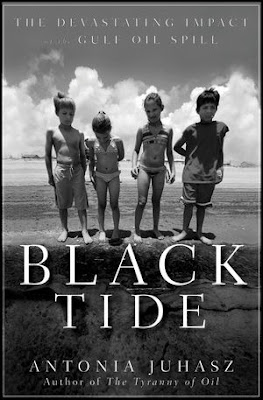 On April 20, 2010, the Deepwater Horizon drilling rig exploded fifty miles off the coast of Louisiana, killing eleven men, and unleashing an 80,000 barrel a day oil gusher. It became the largest oil disaster in American history, and it could happen again.

It is more than a story of ruined beaches, dead wildlife, chemical dispersants, corporate spin, political machinations, and financial fallout. It is a riveting human drama filled with people whose lives will forever be defined as "before" and "after" the Gulf oil disaster.

Black Tide is the only book to tell this story through the perspective of people on all sides of the catastrophe, from those who lost their lives, loved ones, and livelihoods to those who made the policies that set the devastating event in motion, those who cut the corners that put corporate profits over people and the environment, and those who have committed their lives to ensuring that such an event is never repeated.

"We cannot allow the BP disaster to be pushed from public view the way BP used chemical dispersants to hide the oil. These remarkable stories—of loss, heroism, and culpability—are a vivid reminder that this catastrophe will be with us for decades, and that we have not yet made the changes necessary to prevent destruction in the future." --Naomi Klein, author of The Shock Doctrine: The Rise of Disaster Capitalism

"BLACK TIDE is extremely well researched, reasoned and written. The story of the Macondo well disaster has important ramifications for our future. Antonia Juhasz helps us understand what this disaster can mean to present and future generations." --Dr. Robert Bea, Deepwater Horizon Study Group

"It's hard to imagine a better person to turn loose on this epochal disaster than Antonia Juhasz, with her compassionate heart, vivid prose, and rich expertise in both oil and economic policy. Black Tide covers everything from the details of the oil-smeared beaches and the drilling rig's control room to the big picture of the mega oil corporations and the governments they push around, but it's not just a book about disaster: it's a series of encounters with real people, from oceanographers to oyster shuckers, striving to make things right. Juhasz tells this story as no one else could. BLACK TIDE is riveting, infuriating, and incredibly important to understand the places, politics, and people who survived the Gulf oil disaster." --Rebecca Solint, author of A Paradise Built in Hell: The Extraordinary Communities that Arise in Disaster.

It is the worst oil disaster in American history. An oil and gas monster lurking deep below the ocean kills eleven men and destroys a multimillion-dollar rig, the Deepwater Horizon, before launching a deadly rampage across the Gulf of Mexico and onto the shores and beaches of four states.

The heads of the world's mightiest corporations and most powerful governments sit impotent for three long months in the face of the monster's attack. Blasted by chemicals, a toxic oily stew remains floating in underwater plumes, waiting on the bottom of the ocean for the next big storm to strike and penetrating deep into the food chain. And it could all happen again.

But even if you followed it in the media, you have yet to get the whole story. To truly understand the causes and the impact of this disaster, you must know the people behind it and those forever changed by it.

In Black Tide, award-winning author and oil industry watchdog Antonia Juhasz, whose previous book The Tyranny of Oil warned that all this could happen, offers an in-depth investigation behind the scenes and beyond the sludge-smeared beaches to meet the people whose mistakes, and possible crimes, resulted in the most devastating oil spill in American history and those who must continue to bear its costs.

From the families who paid the ultimate price, you will hear heart-pounding accounts of the last fateful hours aboard the Deepwater Horizon and the struggle to prevent the largest deepwater blowout in history unfold. You will follow "plume hunters" tracking the oil across the ocean and workers who clean up the toxic mess. Dedicated scientists expose the harms of dispersants while shrimpers, crabbers, and fishers take you onto their boats to share a way of life that may never recover. You will see Native American families fight for survival as environmentalists mount a defense from the beaches of Florida to the halls of Congress.

Oil industry workers, engineers, and executives will take you inside the dangerous and politically volatile world of offshore oil production, revealing why this is not just a story of one accident or a single oil company. The king and queen of the Shrimp and Petroleum Festival showcase the deeply intertwined world of seafood and oil in the Gulf, even as the fierce jousting by BP CEO Tony Hayward, oil lobbyist Jack Gerard, Governor Bobby Jindal, and President Barack Obama exposes the political-corporate straitjacket confining us to a world governed by our deadly addiction to oil.

It was a disaster that should never have happened, and one that has every possibility of occurring again if those who are fighting for lasting change are not successful.

Often in their own words, here is the story of the people of the BP Gulf oil spill, a story you have not yet been told. Part whodunit, part political thriller, and part epic tale of a true-life disaster, Black Tide is the definitive account of the unforgettable event whose full impact, both on the Gulf Coast and through- out the world, will be with us all for years to come.
Posted by Next Year Country

Email ThisBlogThis!Share to TwitterShare to FacebookShare to Pinterest
Labels: oil and gas