The Nuclear Crisis at Fukushima 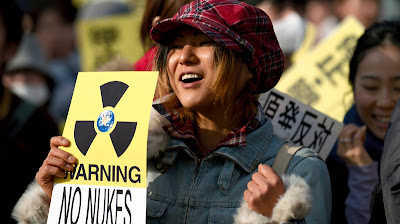 The attempt to transform the nuclear disaster in Japan into a manageable, not-to-worry event is well underway.

For the nuclear industry there are strong economic incentives to engage in careful and studied use of language to manipulate and define the tragic events unfolding in Japan. Clearly, there are billions and billions of dollars at stake.

There is also the thorny matter of denial.

What media mogul, politician, utility CEO, investment manager, or, for that matter, environmentalist buying into the-we-must-have-nukes- to-stave-off-global-warming viewpoint is not subject to severe emotional crosswinds at this moment?

What individual who has been a consistent and strong nuclear booster or a recent nuclear advocate, such as President Obama, wants to seriously re-consider the alarming, long-term consequences of his or her nuclear advocacy? Pie-in-the-face is no fun.

And plenty of ordinary citizens, with no vested interest, no clear policy position, understandably wince and look away — rather than face the unfolding, humanitarian crisis.
Whatever the reasons a very strange fault line has emerged in the media’s coverage and the industry’s comments about the tragedy at Fukushima.

On the one hand, a surprising amount of coverage has been extremely detailed and technically thorough with clear graphics and a parade of revealing photos. Examples include the comprehensive articles by New York Times reporters, Matthew Wald, Hiroko Tabuchi, and Keith Bradsher who have held an accurate magnifying glass to the potential risks of overheated or non-functioning irradiated fuel pools. Equally unexpected have been the detailed and thorough reporting by CNN with nuclear engineer Arnie Gunderson who, on the air, five days ago said, “We are at a Chernobyl event right now.”

On the other hand, the editorial page of the New York Times, TEPCO and the US Nuclear Regulatory Commission have been making statements so disjunctive with reality one has to wonder, Hmm, on which planet do these folk reside? Are they just plain manipulating data – and language – to save the nuclear power option or do they deep in their guts really believe what they opine? Or is it an insidious combination of both factors?

Luckily in the United States and in many countries around the globe citizens have the internet. Just a click away is a plethora of extraordinary satellite photos to test the accuracy of some recent statements.
Example: On March 18, the New York Times in an editorial entitled “Early Questions After Japan” stated “The Japanese reactors seem to have survived one of the most powerful earthquakes ever recorded without major structural damage.” The above two photos, the first of the irradiated fuel pool area of reactor no. 4, the second of devastated reactor no. 3, show reactors whose skeletal remains are eerily reminiscent of after-the-collapse pix of the World Trade Center.

In the world of the editors of the New York Time’s what qualifies as “major structural damage”? Would the crippled reactors at Fukushima have to be razed to the ground?

The flight of fantasy is not limited to the New York Times. On March 21, William Borchardt of the US Nuclear Regulatory Commission said the plants “appear to be on the verge of stabilizing.” How can reactors that are half-demolished, whose irradiated fuel pools must be cluttered with fallen debris be anything close to “stabilized”?

And what about those puffs of black smoke pouring out of reactor no. 3, the reactor known to be using MOX or plutonium-laced fuel? And white smoke escaping from reactor no. 2? Are these secure, stabilized reactors? Meanwhile, TEPCO, the Japanese Power Company for several days has insisted the reactors at Fukushima are now “under control.”

Part of the narrative being developed is that, all TEPCO needs to do is restore power to the site and the situation will be manageable. Indeed, the efforts of Japanese firefighters from Tokyo and members of the Japan Self-Defense Forces to bring in a mile-long, high-voltage transmission line have been heroic. Sadly, dozens of these workers, even by TEPCO’s admission, have been exposed to un-safe levels of radiation. They are likely to pay for their actions with serious, potentially life-threatening health consequences in the short and long-term.

Re-establishment of power at the site is vital to continuing efforts to stabilize the plants. The comfort of fire fighters working through the night is somewhat undermined when, with a cold eye, one revisits the actual state of the reactors.

How is it possible to attach a cable to pumps inside buildings that look like they had been demolished by a cruise missile? What is the likelihood that pumps, valves, and all the delicate, complex connections inside the reactors are sufficiently intact for such a connection to be viable? Yes, the effort must be made, but this does not mean we are anywhere near to approaching the re-assuring situation of “stability” or “control.”

At the beginning of this crisis, on March 11, when TEPCO started trying to cool the crippled reactors with sea water, Robert Alvarez of the Institute of Policy Studies described the attempt as a “Hail Mary.” He explained this meant a desperate, last-ditch, totally-outside-of-the-book attempt to control the rapidly unraveling situation.

The latest news coming out of Japan: On March 22, the temperature in the core of reactor no 1 had zoomed upwards to 715-735 degrees Fahrenheit. And steam continues to periodically erupt from several of the Fukushima reactors.

It seems we are still at the “Hail Mary” stage. In fact, we never left it.

The question: whether citizens in the US and around the globe will again be mislead by the comforting words of pro-nuclear advocates and uninformed media sources or pay attention to the evidence before their very eyes.


Mina Hamilton is a writer based in New York City. Formerly she was the Co-founder and Director of the Radioactive Waste Campaign. She frequently writes about nuclear issues. She also is a Life Coach and teaches yoga. She is the author of Serenity To Go: Calming Techniques for Your Hectic Life. Read other articles by Mina.
Posted by Next Year Country