Naomi Klein: Why Climate Change Science Is So Threatening to Right-Wing Ideologues

Unless we come up with some better solutions Klein says, ""this crisis will be exploited to militarize our societies, to create fortress continents."
Amy Goodman
Democracy Now
March 9, 2011 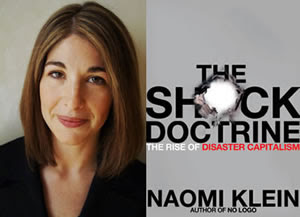 AMY GOODMAN: Our guest for the hour is Naomi Klein, journalist and author. Her latest book, The Shock Doctrine: The Rise of Disaster Capitalism. She’s writing a new book on climate change and the climate change deniers. Naomi, take it from there.

NAOMI KLEIN: The book is not about the deniers, but it does get into it, because I started trying to understand these dramatic drops in belief that climate change is real. I mean, we’ve just ended the hottest decade on record. There’s overwhelming evidence that climate change is real now. It’s not just about reading the science. It’s about people’s daily experience. And yet, we’ve seen this remarkable drop, where, in 2007, 71—this is a Harris poll—71 percent of Americans believed climate change was real, and two years later, 51 percent of Americans believed it. So, a 20 percent drop. And we’ve seen a similar dramatic just the floor falling out in the same period in Australia, in the U.K. It’s not happening everywhere. It’s happening in countries that have very polarized political debates, where they have very strong culture wars.


And there are some people who have been doing some really interesting analysis of these numbers, where you see—like there’s a political scientist named Clive Hamilton in Australia who’s done some really terrific writing on this, where what he shows is that climate change didn’t used to be a partisan political issue. You wouldn’t know whether somebody believed in climate change or not just by asking if they were Republican or Democrat. That’s completely changed. Democrats overwhelmingly believe in climate change. Their position hasn’t changed. Republicans now don’t—overwhelmingly do not believe in climate change. So that drop has been split along partisan lines. Now, it seems kind of obvious that that would be the case, but still it’s remarkable, because what it means is that it no longer really has anything to do with the science. And the environmental movement has just been shocked by how it would be possible to lose so much ground so quickly when there is so much more scientific evidence, so that, there’s all kinds of attempts to respond to this, to get climate scientists out there explaining things better, to popularize the science, and none of it seems to be working. And the reason is that climate change is now seen as an identity issue on the right. People are defining themselves, like they’re against abortion, they don’t believe in climate change. It’s part of who they are.

AMY GOODMAN: And what does it say, you don’t believe in climate change?

NAOMI KLEIN: Well, some people believe in climate change, but the main thing is they don’t believe that humans have anything to do with climate change. And it isn’t about the science, because when you delve deeper into it and ask why people don’t believe in it, they say that it’s because they think it’s a socialist plot to redistribute wealth. It’s easy to make fun of, you know, and there’s all this language, like "watermelons," that they say the green groups are watermelons: they’re green on the outside, but they’re red on the inside. Or George Will once said it’s a green tree with red roots. And the idea is that it’s some sort of a communist plot. And this is actually not at all true. And in fact, most of the big green groups are loath to talk about economics and often don’t want to see themselves as being part of a left at all, see climate change as an issue that transcends politics entirely.
Posted by Next Year Country