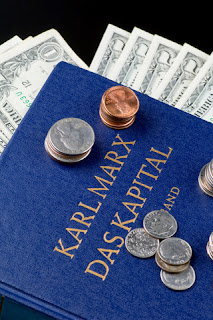 Introducing the second edition Marx wrote: "No-one can feel the literary shortcomings of Capital more strongly than I myself."

A needless worry - the first had already impressed English and Russian reviewers with his stylistic "peculiar charm" and "unusual liveliness."

Paul Johnson's unremittingly hostile Intellectuals conceded that Marx "made brilliant use of epigrams and aphorisms.


His humour was often biting and savage. Nonetheless his excellent jokes made people laugh."

As with Gibbon, many Marxian jests lurk in the twilight world of footnotes, often adorned with Latin from his schooldays.

He was an accomplished classicist and included the two opening jewels: "There now follows the above-quoted shit from Proudhon," and "Lady Orkney's endearing offices are supposed to have been foeda labiorum ministeria," base services performed with the lips.

Blogger Adam Arvidsson has suggested this as the reason for Silvio Berlusconi appointing ex-showgirl Mara Carfagna as minister of equal opportunity.

How Marx would have relished bunga bunga!

The excremental Proudhon remark niftily links with Monty Python's communist quiz sketch in which Karl, having scored well on class struggle and industrial proletariat, is stumped by a question on West Ham United and despairingly ejaculates: "Oh, shit!" 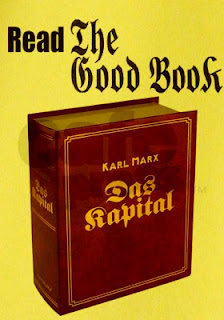 Proudhon on machinery is sarcastically dismissed - "so much for his wonderful idea," and on capitalist production for "attempting to shout his way out of the difficulty with sesquipedalia verba" - long-windedness.

Other economists are similarly felled, above all Frederic Bastiat - Marx would be disgusted that there is now a Bastiat Prize - characterised as "a dwarf economist," an "eloquent ignoramus" and "truly comical."

Destutt de Tracy is a "fish-blooded bourgeois doctrinaire," Jeremy Bentham a "soberly pedantic and heavy-handed oracle" and "a genius in the way of bourgeois stupidity."

Wilhelm Roscher has "childish notions," he pumped out "eclectic professorial twaddle" and his works are "the graveyard of the science of political economy."

His idea of exchange value likened to "the foolish virgin who admitted that she had had a child but only a very little one," this establishing Marx as father of Irish jokes.

Religion takes some predictable hard knocks: "The established church will more readily pardon an attack on 38 of its 39 articles than on one-39th of its income," while for the church, atheism is a culpa levis - venial sin - compared with the criticism of existing property relations, a crack congenial to Dawkins and Hitchens.

The exceptionally well-read Marx had fun in many languages.

Laughing at other economists' weakness for Robinson Crusoe analogies, Karl creates his own ending: "He soon begins, like a good Englishman, to keep a set of books."

He glides from comically paraphrasing - in Italian - Dante regarding reception of Kapital to Don Quixote "who long ago paid the penalty for wrongly imagining that knight errantry was compatible with all economic forms of society."

Marx attempted to lower eyebrows raised at his claim that "this volume cannot stand accused on the score of difficulty" by adding: "I assume, of course, a reader who is willing to learn something new and therefore to think for himself."

Nowadays the often allusive classical jokes will fly over many heads.

Thus when Marx on commodity circulation observes "non olet" - it doesn't smell - you need to know this was Roman emperor Vespasian's answer to son Titus's objection to him taxing public lavatories, hence the French vespasienne.

And when he derides the propaganda on how machinery frees the worker put out by "the apologists of capitalism," his "nominibus mollire licet mala" - It is appropriate to soften evils with names - gains comic point if you know it is Ovid's advice in his Art Of Love on how to flatter ugly women.

For those wishing to apply Marxian humour to contemporary British politics, the jewel in his crown has to be the quotation from Boileau describing Gladstone's budgetary contradictions. 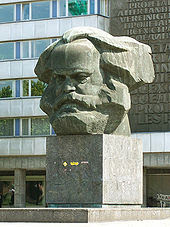 This Gallic vicar of Bray, a favourite of Engels, is surely an unimprovable description of Nick Clegg.

Marxists are frequently accused of never actually reading Kapital and hence not really knowing their bible.

There are surely as many - if not more - anti-Marxists who haven't read it either, so they can be accused of not really knowing what they are against.

Although undeniably heavy going in places and not everyone's first choice for desert island book, Kapital can be read in terms of literary charm and multiform humour.

A thundering good read.
Posted by Next Year Country