The criminal tale of Monsanto 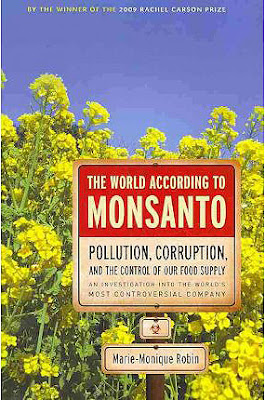 “What counts for us is making money,” said a Monsanto vice-president to a new employee at an induction session in 1998, reminding the idealistic novice that there is a simple, and crude, capitalist philosophy at the heart of the US chemical and biotechnology giant.

All Monsanto's talk about the ecological and humanitarian miracles of its chemicals and genetically modified organisms (GMOs) is so much hot air, says Marie-Monique Robin in The World According To Monsanto.

The reduction of pesticide pollution, the end of world hunger, plants producing biodegradable plastics, corn containing antibodies against cancer — none of these promised GMO solutions have been delivered.

This is because what really matters to Monsanto, as Robin documents, is control of the world seed market and the genetic engineering of those seeds to be resistant to, and therefore dependent on, Roundup, Monsanto's herbicide with the real miracle; gigantic profits.

GMOs and Roundup, says Robin, are amongst the "most dangerous products of modern times", joining a list that is heavily populated by other Monsanto products such as polychlorinated biphenyls (PCBs), dioxin and bovine growth hormones.

In all cases, Monsanto has been fully aware of their harmfulness yet has lied about their dangers with an impunity conferred by the collusion between the company and the public health and environmental authorities of successive US governments.

Monsanto’s criminal tale began in the 1930s with PCBs which are heat-resistant industrial coolants and lubricants. PCBs polluted the planet for four decades until they were banned in 1977, leaving a continuing trail of cancers and other diseases.

PCBs are resistant to natural biological decay and are accumulative in fatty tissue through the food chain to maximum levels in top predator species like us.

Internal Monsanto memos that documented the toxic effects of PCBs reiterated the company’s obsessive concern to not “damage our sales position in the synthetic hydraulic fluid field”, arguing that “we can’t afford to lose one dollar of business”.

It said “continued sales and profits' are overriding priorities and that public lying about PCB toxicity is essential to 'protect the image of ... the Corporation'.”

The song was the same with 2,4,5-T, a powerful herbicide containing highly toxic dioxin. This product was the basis for Agent Orange, which poisoned much of southern Vietnam's crops, forests and people during the Vietnam War.

The toxicity of 2,4,5-T was denied by Monsanto, which "hid the data in a drawer and said nothing to the health authorities.”

After 2,4,5-T was banned and US soldiers and Vietnamese civilians had undertaken legal action against their dioxin poisoning, the company presented falsified scientific studies to government authorities, fraudulently claiming dioxin was not carcinogenic.

Bovine growth hormone (BGH) was a variation on the same theme.

It also increases mastitis (a serious infection). There are 22 recognised serious side effects, including the risk of cancer, amongst BGH milk users.

Suppression and manipulation of data from veterinary tests by Monsanto, however, secured government approval of BGH in 1994.

This well-worn theme has been continued with Roundup (Monsanto’s trade name for glyphosate).

Roundup has become the herbicide most widely used by the world’s farmers and gardeners. But its ecological claims to 100% biodegradability and non-toxicity are false and misleading.

Animal health studies find that either glyphosate or the other principal ingredients in Roundup are implicated in miscarriages, premature births, spontaneous abortions and pre-cancerous morbidities.


Monsanto maintained its usual silence on these health outcomes, however, to protect Roundup’s major revenue-stream for the company.

When Monsanto’s patent monopoly on glyphosate expired in 2000, Roundup's profitability was protected by Monsanto's move into GMO agriculture.

Again, Monsanto’s Roundup-Ready GMOs, with their glyphosate-resistant genes, escaped the regulatory net. The US Food and Drug Administration (FDA) declared toxicological testing unnecessary because of the “substantial equivalence” between GMOs and their natural cousins, a concept widely disputed in the independent scientific community.

Monsanto's extraordinary power grows out of the barrels of many guns. The private industry-government “revolving door” puts Monsanto officials in the right place to ensure regulatory conditions satisfy the needs of Monsanto. Monsanto’s presence in US representation on United Nations bodies guides the rest of the world to follow the US lead.

Monsanto’s armory also includes bribery (election funding to Republicans and Democrats) and the use of the notorious Pinkerton Detective Agency to spy on farmers suspected of illegally saving transgenic crop seeds for replanting rather than purchasing seeds anew each season from Monsanto, whose “intellectual property” rights to the genetic information in the seeds is recognised in law.

Monsanto’s deep pockets and readiness to threaten costly litigation against its critics keeps many of its opponents muted. Government whistleblowers are harassed, marginalised, defamed, fired or otherwise intimidated into silence.

The compliance of some in the scientific community is bought through Monsanto's funding of cash-strapped scientists and universities while Monsanto’s advertising dollars help to keep investigative journalists in line.

Robin’s incisive case study of Monsanto observes that ethics and public health are “abstract concepts foreign to the logic of capitalism”.

Would you trust the company that gave us Agent Orange yesterday to give us the food on our plates tomorrow? Not if you value your life.
Posted by Next Year Country