Japan or Canada, a nuke is a nuke.
By Paul McKay
StraightGoods
Tuesday, March 15 2011 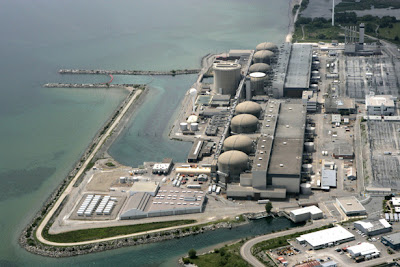 Nuclear power operators sometimes joke that they function in a world that is 95 percent boredom and 5 percent terror.

The brave crews remaining at the stricken Fukushima power complex in Japan are now staring down terror 100 percent of the time, as they scramble to keep four nuclear furnaces cooled and prevent highly radioactive spent fuel from igniting. They are relying on makeshift fire hoses and sea water, while hydrogen explosions and radiation spikes surround them.

Canada has some two dozen Candu reactors, each with a radioactive inventory similar to those in Japan.


As the world holds its breath, nuclear advocates in Canada are claiming such a catastrophe cannot happen here. Our Candu reactors, they assert, have extra safety features — and they are not sited where earthquakes and tsunamis can wreak havoc.

This is essentially true — if the only concern is the probability of a Chernobyl-type catastrophe. But all Candu power reactors, like those at Chernobyl and Fukushima, contain similar inventories of fiercely radioactive elements in their cores, and operate at unfathomably high temperatures and pressures.

From a physics perspective, they are essentially atomic bombs, carefully designed and operated to produce prodigious amounts of power — yet never explode.

For this reason, it has aptly been called an "unforgiving technology". Nothing, absolutely nothing can go wrong during the decades that nuclear power plants must operate to justify their enormous cost. When nothing goes wrong, there is boredom. When something does go wrong, there is terror.

But the deadly radioactive inventory currently in each Candu will not disappear even if the plants operate safely for decades. More than 200 radioactive elements will remain embedded in the spent fuel produced over that time period, in the intensely contaminated core, and in the miles of coolant pipes, plumbing and valves. Some of these will remain latently lethal for hundreds of decades.

There are currently some two dozen Candu reactors operating in Canada, each with a radioactive inventory similar to those in Japan. Each Candu will someday have to be mothballed, cooled, drained, and stabilized. The cores and cooling circuits will have to be cut up by robots, which themselves will become so contaminated they will have to be disposed of by other robots. The remaining structures will then have to be entombed in concrete forever, while the reactor innards and decades worth of spent fuel bundles are buried elsewhere in biosphere-immune rock formations.

The bad news is that the cost of spent fuel disposal will be at least $26 billion; that not a single Candu has yet undergone full de-commissioning; and that no method or location for disposing of the lethal fuel waste has been proven.

Worse, virtually nothing is being done in Ontario to begin de-commissioning the defunct Douglas Point reactor. The official plan is to let it cool for 50 years, then tackle the problem. The same 50-year "layaway" plan will apply to each Candu, once each ceases to operate. Meanwhile, the public entity responsible for this nuclear waste, Ontario Power Generation, recently it has risked part of the funds set aside on the stock market.

So we are pushing the multi-billion dollar costs and immeasurable public risk for nuclear fuel disposal onto future generations, while ours consumes the power. How ethical is that?

Currently, the Ontario government plans to build two more large reactors at Darlington, at a cost likely to exceed $30 billion. In the first few weeks of operation, they would create a radiological time-bomb generations of Ontarians will inherit — even if no accident occurs.

Some may contend that since our generation has already built two dozen Candu's that must be entombed some day, and created some 60,000 tonnes of lethal nuclear wastes, adding more is no big deal.

That might be plausible if there was a proven, safe method of dismantling defunct Candu reactors, and permanently isolating nuclear wastes for millenia. But there is not, and virtually no thought or resources are being devoted to such solutions.

Meanwhile, the Canadian inventory of hellishly dangerous radioactive materials grows — and that is a fact for which our grandchildren will almost certainly curse us.

Paul McKay is a multiple recipient of Canada's top journalism awards for investigative reporting, business and feature writing. He is a past winner of the Atkinson Fellowship in Public Policy, and was the 2005 Pierre Berton Writer-in-Residence. A series he wrote for the Ottawa Citizen was a finalist for the Governor General's Michener prize for public service journalism. He has also written four critically acclaimed books covering public policy, business biography, and true crime subjects. His feature writing has appeared in the Globe and Mail, Toronto Star, Vancouver Sun and Maclean's Magazine.


Copies of his latest book, Atomic Accomplice, can be purchased online at:
Website: http://www.paulmckay.com
Posted by Next Year Country