By Canadian Coalition for Nuclear Responsibility and affiliated groups
February 7, 2011 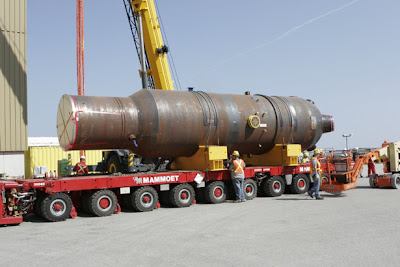 The Canadian Coalition for Nuclear Responsibility, the Coalition for a Nuclear Free Great Lakes, the Mouvement Sortons le Québec du Nucléaire, and many affiliated groups, join together in condemning the Canadian Nuclear Safety Commission's decision to allow Bruce Power (BP) to ship 16 used steam generators -- amounting to 1,600 tonnes of radioactive waste -- through the Great Lakes and St. Lawrence River halfway around the world to Sweden.

This shipment contains at least six times - and possibly more than 50 times -- the maximum amount of radioactivity allowed by IAEA regulations. Because of this, the CNSC had to make a "Special Arrangement" exempting Bruce Power from standard IAEA regulations.

"By bending the rules, the CNSC has demonstrated that they are champions of the nuclear industry rather than defenders of the public interest -- for there is no public benefit to be served by allowing these shipments," said Dr. Gordon Edwards, President of the Canadian Coalition for Nuclear Responsibility.

"This is a dark day for communities around the Great Lakes and the St. Lawrence River, and for the 40 million people whose drinking water is derived from these sources, for this shipment of radioactive waste is just the beginning -- it will be followed by many other such shipments," said Michael Keegan, Chair of the Coalition for a Nuclear-Free Great Lakes.

"Radioactive contamination of our lakes and rivers is inevitable if they are to be routinely subjected to the transport of radioactive debris from defunct nuclear reactors," said Dr. Michel Duguay, Coordinator of the Mouvement sortons le Québec du nucléaire.
Advertising

Mayors, aboriginal communities and NGOs will continue to oppose these shipments both nationally and internationally, and they will continue to bring this controversial issue to the attention of political decision makers at all levels of government. "Politicians have to wake up and pass laws to protect the public and the environment from the deliberate dissemination of radioactive waste materials," said Marc Chénier of the Regroupement pour la surveillance du nucléaire.

During a 2006 Environmental Assessment, Bruce Power and the CNSC declared that the used steam generators are "radioactive wastes" and therefore not able to be recycled for safety reasons, promising that they will be stored as waste on site at OPG's Western Waste Management Facility -- in a surface facility until 2043, and underground thereafter.

OPG, the owner of the Bruce reactors, is fully prepared to store all used steam generators from all Ontario reactors in a special facility adjacent to the Bruce site, with plans for a "segmentation facility" to disassemble the radioactive hulks later on. This arrangement is laid out in a 2007 contractual document between OPG and Bruce Power.

But in October 2009 Bruce Power pressured OPG to transfer ownership of the steam generators to them so that they could save money on waste storage charges by using a Swedish company to disperse much of the radioactive metal into the world's scrap metal supply -- thereby contaminating an otherwise "clean" source of recycled material.

"The practice of contaminating scrap metal supplies by mixing in radioactive waste materials has been condemned by many bodies, including the United Nations, the Steel Manufacturer's Association, and the International Recycling Bureau," said Kay Cumbow of the Michigan-based group, Citizens Against Chemical Contamination.
Posted by Next Year Country