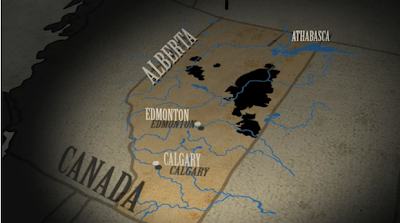 A report by a major global research group representing the world's 10 largest car buying markets has concluded that Canada's bitumen is one of the world's dirtiest oils due to its poor quality, low gravity and the vast amount of natural gas needed to enrich it.

The study for the International Council on Clean Transportation (ICCT), which looked at the carbon intensity of oil from 3,000 fields now supplying European gasoline markets, also concluded that increasing reliance on dirty fuels will raise greenhouse gas emissions by 45 per cent above that of conventional oils.

The findings of the ICCT, a group that does technical research on the environmental performance of automobiles, contradicts modeling studies funded by the Alberta government and the oil sands industry which claim that bitumen has only a five to 15 per cent higher carbon footprint than conventional crude.

The study calculated the amount of green house gas emissions created by extracting, moving and refining different types of crude oil based on specific characteristics including weight, viscosity, purity, age of the field, leaks and the flaring of waste gases. (About 20 per cent of oil's carbon footprint comes from the production and refining process: the rest comes from cars burning gasoline.)

The majority of Europe's oil now arrives from relatively low to medium carbon-intensive oil fields with emissions ranging anywhere from four to 19 grams of greenhouse gases per megajoule. (One joule represents the energy of a man picking up an apple while one million joules resembles the energy of a one tonne vehicle moving 160 kilometres an hour.)

However, a small percentage of European imports now come from high carbon fields that either burn off great volumes of natural gas, leak methane or contain heavy oil such as bitumen.

The cleanest and least energy-intensive oils, which tend to be very light and posses a low viscosity, hail from Norway (6.2 grams), Saudi Arabia (6.9) or Hibernia, Canada (7.3).

In contrast the dirtiest oils came from Kupal, Iran (30.5 grams) Suncor's Steepbank/Millenium mine (26.7) and the Dacion oil field in Venezuela (22). These fuels produce more than double the average volume of emissions from conventional crude oil (12 grams) now being burned in Europe.

Direct imports of bitumen to Europe from Canada are now small but are "expected to grow rapidly in the next 10 years." The report estimated that the refining of bitumen into gasoline or jet fuel would result in 150 per cent higher emissions than conventional European imports.

Like researchers at the University of Toronto and Calgary, the authors of the ICCT report characterized the quality of data on carbon intensity from the tar sands as poor: "There is a lack of detailed data/transparency on tar sands projects."

The report explained that tar sands had a large carbon footprint due to "energy-intensive extraction and upgrading." (Bitumen has a gravity of 10 while the world's cleanest oils have API gravity higher than 35.) The dirtiness of Iranian and Venezuela crudes was attributed to the enormous amount of gas burned or vented during their extraction.

Emissions from 3,000 different oil fields included in the study varied greatly or by a factor of five. In fact Canadian oil illustrates the challenging difference between light (conventional) and ultra-heavy (unconventional) crude. The tar sands, noted the report, has "four times the emissions of Hibernia," a light oil.

Nevertheless, the Alberta government now refers to oil sands development as a "clean energy story." Ruled by one party rule for 40 years, the government says it will reduce emissions with technologies that "remain to be proven" or "have yet to be imagined."

The ICCT report recommends several remedies to reduce production emissions from high carbon fields. For starters oil companies should monitor flaring and leaks (fugitive emissions) and then actively decrease wastage, a practice now common in Canada but not in Africa or Russia.

Companies producing oil from fields containing a high percentage of natural gas should either conserve or market these gases or reinject them into the ground instead of burning them off.

Lastly, emissions from the tar sands could be reduced by "limiting its exploitation" or "by improving energy and carbon efficiencies such as using energy inputs with low carbon intensity."

The ICCT corroborates a recent U.S. study which predicted that emissions from processing heavy oil and natural bitumen blends were two to three times the average of conventional crudes.

For nearly 100 years engineers, scientists and politicians have referred to thick asphalt-like deposits of bitumen as tar sands. Even though the resource does not float on top of sand, industry rebranded the ultra-heavy crude as oil sands in the 1990s to make the sulfur-rich resource sound more accessible and clean.

While companies such as Total and Statoil often refer to bitumen as "extreme" or "difficult," former Alberta politicians have described the junk crude as "the jewel of hydrocarbons."

The ICCT is funded by a variety of U.S. charities including the William and Flora Hewlett Foundation.

Tyee writer in residence Andrew Nikiforuk is an award winning investigative journalist and author of the national best seller: Tar Sands: Dirty Oil and the Future of a Continent.
Posted by Next Year Country