Canada's new environment minister could have acknowledged the facts. Instead, we get slippery spin. 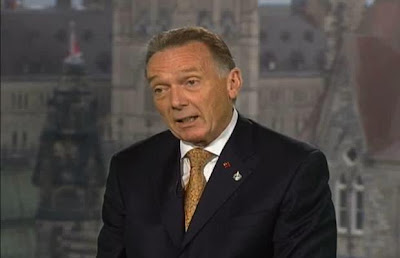 Oddly enough, the former newscaster mostly avoided any mention of his ministerial mandate including water conservation or enhancing "the quality of the natural environment."

Instead, the Tory politician, sounding like a grossly overpaid oil patch lobbyist, declared bitumen, an extremely dirty hydrocarbon, a gift to morality and economy.

Performing like a late night infomercial host, Kent then pronounced the polluting mining enterprise three things it really is not: ethical, regulated and secure.

Just when the nation needs an informed advocate for freshwater, wildlife and renewable energy, the Harper government has given us another fossil salesman as glib as former BP's Tony Hayward.

Appointing a former newscaster with great media savvy to champion a dirty resource in a ministry designed to protect the environment is a stroke of genius. It's also something you'd expect Nigeria, Russia or Venezuela to do. But Canada's descent into the smelly hell of petro politics seems irreversible.

Let's begin with the morality issue first. Calling bitumen "ethical" (which our Prime Minister now has done as well) is about as ridiculous as describing the Kardashian sisters as either virtuous or intellectual.

Kent, of course, has pulled the silly label from the mouth of Conservative propagandist Ezra Levant, a former tobacco lobbyist and a timely master of inaccurate statements.

According to Levant rapid bitumen production is "ethical" because it lessens our dependence on bloody oil from the Middle East.

But the facts tell a different story. After ten years of dirty oil production, half the country (eastern Canada) remains more dependent on blood-soaked stuff from Saudi Arabia, Iraq and Algeria than the United States, bitumen's core market. How ethical is that?

Canada's bitumen miners also look more like the Wild Bunch than Mother Teresa. The forest diggers includes BP, which polluted the Gulf of Mexico; Exxon Mobil, which has funded attacks on climate science; and Total, which supports Burmese dictators. Another investor, PetroChina, is well known for its crude conscience in Africa.

So when the nation's environment minister can't admit that oil is all about making money with often perilous disregard for the social, political and environmental consequences, Canada has once again told the world that it is just another petro state with an unhealthy addiction to oil revenue and bold-faced lies.

Kent's misinformed declarations about regulation also won't impress his global peers or ordinary Canadians. Instead of citing Levant's ethically-challenged analysis, Kent should have quoted the 2010 fall report released by the Commissioner of the Environment and Sustainable Development.

Unlike Levant, the auditor can only publish 100 per cent verifiable facts. He reported that Environment Canada has "insufficient data to monitor oil sands development" as well as "threats related to population growth and economic development."

Moreover, Environment Canada's only water quality monitoring station downstream of the project had, as of June 2010, "no baseline measures or long-term data to track changes in water quality and aquatic ecosystem health in the river associated with oil sands development."

Futhermore, the Oil Sands Advisory Panel found water monitoring for the project, the only basis for sound regulation, to be neither credible nor trustworthy.

Because of its complexity and scale, the oil sands now produces the world's most expensive crude. Bitumen, in turn, sets the marginal price for oil. As such the project is insanely vulnerable to oil price shocks.

Bitumen's long supply chains (the project relies on some of the world's longest oil pipelines) are also damned brittle. Just two modest leaks on Enbridge-owned pipelines last year created refinery shortages throughout the U.S. Midwest and even upped the price of oil.

Rethink how we use oil sands

Now Canadians, a practical mining people with a ho-hum environmental record at best, don't trust bitumen salesmen anymore than they do green utopians.

At the end of the day, Alberta's junk crude, a screaming signature of peak oil, remains a strategic resource that should serve as a continental bridge to a low carbon economy. Furthermore, energy transitions take decades not years. This reality alone makes superior environmental performance in the oil sands not a rhetorical luxury or propaganda item, but an issue of critical national importance.

But until a Canadian environment minister seriously reduces CO2 pollution in real time with a national carbon tax, or defends freshwater with a verifiable federal monitoring program, or champions the health of people and wildlife downstream of the oilsands by upholding federal laws, the project will remain a national embarrassment.

Thanks to a decade of well-documented federal negligence the world's largest energy project has already become a stark global mirror of how ugly and dishonest Canadians can be.

It now looks like things will get much worse.
Posted by Next Year Country