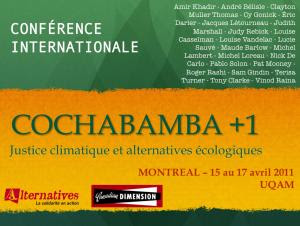 A conference that will address themes such as ecological crises and citizen alternatives, strategies towards sustainable environment and industrial conversion, fossil fuel conflicts, science and climate justice, ecosocialism, citizen mobilization to combat shale gaz/ the Tar sands, ecological debt and solidarity, the multiplicity and convergence of networks. In sum, it will be a time to build a movement!

Pablo Solon, ambassador of Bolivia to the Unites Nations and the principal initiator of the movement towards climate change of the People's Summit that took place in Cancun in 2010.

Maude Barlow, president of the Council of Canadians, world-renowned activist on the issue of access to water.

Vinod Raina, Leader of the People's Science Movement in India. He is known for his work on the issue of environmental debt.

Louise Vandelac, professor art the Environment Institute of the University of Quebec in Montreal (UQAM).

The program will be available soon!
Posted by Next Year Country