Book Review
The Green Blog
"Red and Green since 2007" 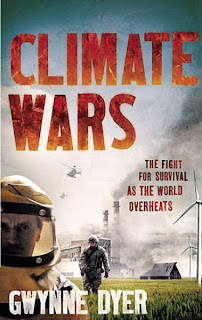 With a title like Climate Wars this book looks “alarmist” even to someone sick and tired of being called just that. But actually, it is far less dramatic than the action paced science fiction that may come to mind. Written by a veteran soldier with academic degrees in military history and years of experience in journalism. Based mainly on the projections made by army analysts of the world from the prognoses in the IPCC 2007 report.

For those of us with academic backgrounds in ecological science and/or a couple of years of climate debate behind us several of its chapters are climate change science and policy repetition. But for me – working on mapping the links between natural resources and conflict – chapter 1 is a great summary with extra insights to the geopolitics of predicted climate change impacts.

And the factual chapters are interspersed with scenarios which are great and briefly outlined below. Being eager to dissect the book for information I find the structure of the factual / non-scenario chapters a bit too mixed up to help make the book as a whole more of a page turning thriller. COP15, for example, is summarized in chapter 6, Real World Politics. Perhaps I could have done with the part about the Copenhagen Accord [p. 209]:

Only a last minute intervention by the British, Americans and Australians, who called for an adjournment and used it to bundle the hapless Rasmussen out of the chair [My emphasis. I have a thing about the obvious incompetence of the Danish prime minister], prevented the ‘Copenhagen Accord’ from being formally rejected at the plenary session. During the recess, they managed to negotiate a last minute compromise in which the accord was neither accepted or rejected. It was simply ‘noted’. And with that, everybody went unhappily off to bed and thence to the airport.

But not only is that entire chapter about COP15 – the topic is mentioned several other places in the book. Similar little issues with, for example, the necessary scientific explanations which come and go in different chapters. Exactly where they are needed, perhaps, if you don’t know them already and isn’t a “book dissector” like me. And underlining the fact that diplomacy and war are each others extensions.

The future scenarios are not predictions. They are more like not unlikely cases told with some necessary filling from Dyer’s imagination. The longer into the future one tries to imagine the more uncertainty is in play – but the first scenarios are quite imaginable. Although summed up in chronology below they are not necessarily interlinked while also not mutually exclusive.

Scenario 2, Russia 2019: The Colder War. The oil and gas revealed beneath the melting North Pole and the new trade routes opening between fewer and fewer icebergs does not lead to war between Russia and the USA. Of course. But it does lead to a lot of discussions on interpreting traditions for drawing sea borders as well as incidents of alleged violations of said disputed borders. Not just regarding drilling but also with incidents of detained fishermen. After years of non-violent conflict – during which the negotiations under UNFCCC has suffered greatly – Russia comes out much stronger: Its northern shores have benefited most from new sea routes due to their head start with a strong fleet of sea ice capable ships and well settled infrastructure, they have strong claims for some of the new resources and it’s all coupled with some positive climatic impacts on the nations agriculture.

Scenario 3, United States 2029: The US-Mexican border is finally sealed off forcefully and completely after surges of refugee influx caused by runaway desertification in a country whose farmers are already struggling financially. The United States of Mexico collapses and several northern regions are effectively ruled by warlords. Inside the USA a strong ethnic group of Mexican heritage is increasingly in opposition to the rest of the country.

Scenario 4, Northern India 2036: India and Pakistan have shared glacier fed rivers for their water supply for decades although otherwise having a periodically hostile relationship. Droughts worsened by climate change, growing populations and increasing consumption have tempted governments to blame the hardships of their peoples on externalities – the neighbours – and forced Pakistan to ration food. After years of fragile peace a military coup and an attack on a dam escalates into an exchange of nuclear warheads. The result is hundreds of millions of casualties and two devastated countries still ruled by the same governments.

Scenario 7, China 2042: During the ’30ies two kinds of terrorist groups are added to the ones previously known to be desperate enough: some from disgruntled oil exporting countries experiencing unforeseen financial losses and some from within the West made up of “leftists” furious at their governments for doing much too little of what they have been asking for (renewable energy etc.) while stepping up efforts on what they have been arguing against (geo-engineering, nuclear power etc.). The former cannot attack inside the West and instead aim at those of their neighboring countries who have begun exporting, for example, sunlight generated power. The latter accomplishes some minor attacks on airlines and even a more serious one on a nuclear power plant. While the world heats and the people of the West become increasingly divided over geo-engineering suddenly China and Indonesia acts without anyone’s agreement. The Earth is dimmed by “artificial volcanic sulfur” being released into the atmosphere. Unfortunately, shortly after the project has begun working a real mega-size volcanic eruption triples the effect. The following years harvests fail world wide: hundreds of million of people die from starvation and almost as many from the armed conflicts, local genocides and mass-migration it incites.

Scenario 1, The Year 2045: The EU has collapsed and the Northern Union of Scandinavia, Poland, Germany, Benelux and France is fending off hordes of immigrants while the north of Italy has separated itself from the south of Italy. Russia is enjoying relative prosperity due to positive effects on its agriculture but is also facing some trouble over disputed Siberian territories eyed by a re-united China. Britain and Japan is guarding their shores fiercely while stacking nuclear arms. Temperatures are up and still rising.

Scenario 6, United States and United Kingdom 2055: The American people never learned to understand the problem of climate change. Peak oil hits hard and the globalized food trade largely collapses: “in this new and unforgiving world, self-sufficiency was the sole basis for security” [p. 182]. Gulf Coast states are devastated by hurricanes and floods, California’s agriculture collapses from perpetual drought. A third party – called “The Goddies” – gains major political influence and the borders are shut tight. Similarly in Europe, the northern countries are getting overrun by people leaving the southern EU states. European Union collaboration starts to strain as food aid is sent south and northern borders tighten despite treaties. Increasingly, the border patrols sealing off Africa and the Middle East is made up of soldiers from northern Europe but eventually these countries decide to pull back and guard only their own territories.

Scenario 5: A Happy Tale: Sincere and determined action is taken to combat climate change – but only after conversely harsh shocks from peak oil causing price leaps, a series of brutal natural disasters around the world and a Bangladesh threat a radical geoengineering initiative on their own if the rest of the world does not cooperate in combination shake up humanity. Global diplomacy works – but too late and too little. A green society keen on geoengineering is created but only some are fortunate enough to survive with it.

Scenario 8, Wipeout: 150-200 years into the future the average temperature has climbed by about 9 degrees from failure to curb climate change. Two groups of civilized settlements survive along the Arctic shores and small, more primitive societies here and there where conditions allow. Inland territories on continents suffer complete desertification. Increasingly, the oceans start to smell like rotten eggs. A process is being initiated in which hydrogen sulfide is being released to deteriorate the quality of air for all breathing forms of life while also breaking down the ozone layer. Which in turn will help scorch the remaining life in ultraviolet radiation. Only the harshest and luckiest life forms will make it to the other side of the “greenhouse extinction” event. A phenomenon that was known to paleontologists, not climatologists. The progress of which no human will live to experience, only few will recognize as it starts.

So, Dyers book is really good. But my own will be even better!
Posted by Next Year Country