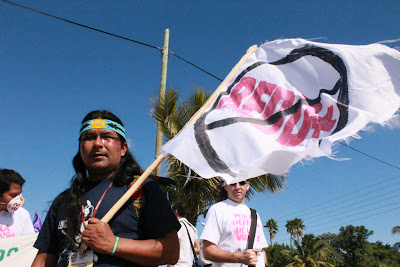 Here at the University of Saskatchewan I have the pleasure of supervising graduate students working in the areas of Canadian Aboriginal law and international Indigenous rights. Last year Nkasi Adams, the first Indigenous woman to graduate from law school in Guyana, joined us at the University of Saskatchewan to pursue an LL.M. focussing on the tensions between Indigenous peoples’ rights and international measures to deal with climate change. I’m happy to have her provide most of the ideas and information for this month’s column. It’s something we don’t know enough about here in the north.

Reducing Emissions from Deforestation and Degradation in Developing Countries (REDD) is a recent addition to the United Nations’ climate change mitigation agenda. Because years of hard bargaining failed to produce a policy architecture that adequately addresses the complexities of climate change, the international community shifted its attention to the strategy REDD represents. It aims to dramatically cut CO2 emissions from deforestation and degradation in developing countries by creating an incentive mechanism that will pay developing countries to manage standing forest. Currently backed by the United Nations, the World Bank, and the United Kingdom, as well as prominent individuals like Prince Charles, REDD is touted as a strategy which could have a revolutionary impact on global efforts to mitigate climate change.

The treatment of Indigenous peoples’ rights in ongoing REDD negotiations, however, raises questions about whether the international community is serious about protecting Indigenous rights. Only three years after the United Nations Declaration on the Rights of Indigenous Peoples (UNDRIP) was adopted by the UN General Assembly, there are questions about whether the international community is willing to give effect to Indigenous rights in the overall design and implementation of REDD.

REDD has significant implications for Indigenous peoples. Vast portions of the remaining standing forest in developing countries which are currently targeted for conservation and protection under REDD are home to Indigenous peoples. They are often the poorest and most marginalised peoples in developing economies, lacking basic human rights and heavily dependent upon the forest for both their physical and cultural survival. Therefore any change in the condition or management of tropical forests, particularly a change as enormous as REDD, will have a direct impact on their livelihoods and culture.

While it may be agreed that forest conservation is in everyone’s interest, and certainly in the interest of Indigenous communities which are vulnerable to both climate change and deforestation, schemes such as REDD could actually have negative consequences for Indigenous peoples if their rights are not taken into account in designing the program. Past experiences have shown Indigenous peoples’ interests and forest conservation policies have not tended to fit on the same agenda. (This is not limited to 2010 and developing countries. Think: wilderness protection schemes, like national parks in Canada, that have ejected Indigenous peoples from their traditional territories rendering them homeless and prevented from using their traditional lands for subsistence.)

Canadian experience in wilderness protection provides an example of forest conservation polices and laws that have generally been hostile to, and systematically biased against, Indigenous peoples because they have denied Indigenous peoples control over their territories and access to life-saving forest resources. These policies favour elites and commercial interests who are in a position to enjoy the national parks or make a profit from operating businesses within them. Similarly, Indigenous peoples in developing countries have suffered grave human rights violations (including expulsion of traditional territories, forced relocation and the use of force to deny them access to resources needed for subsistence) under conservation schemes which purport to protect the forests, wildlife, or wilderness but not the people who have co-existed with them for centuries.

REDD aims to achieve massive conservation of standing forests by providing lucrative financial incentives to encourage developing countries to keep those forests standing. Unless Indigenous rights are specifically addressed in the course of developing such a massive conservation scheme there will be serious consequences for Indigenous people, perhaps consequences that are even more devastating than other environmental protection schemes. As with previous conservation schemes (such as Dumoga-Bone National Park in Sulawesi, Indonesia; Korup National Park in Cameroon; and Kaieteur National Park in Guyana), it is likely that Indigenous peoples’ ability to use the forest will become further restricted as governments impose strict rules on forest usage to guarantee the flow of funds into the country.

In addition, assigning a substantial monetary value to forests may provide an incentive for governments to wrest forests from Indigenous communities or to ignore the fact that their claims to traditional territory have not been recognized or settled. Put plainly, this could set the stage for another land grab. These risks underscore the importance of securing Indigenous peoples’ rights in the design of the program, including property rights, the right to give and withhold consent to REDD activities, as well the right to participate in the overall design and implementation of REDD.

The most recent statement coming out of COP 16 in Cancun just a few days ago does make reference to UNDRIP, to Indigenous knowledge, and to the need to “promote the full and effective participation of Indigenous people and local communities.” These references have come about mainly because of continued advocacy of by Indigenous peoples who are concerned about how their rights will or will not be protected in the context of measures responding to climate change. The document is, of course, not a binding treaty – it merely “notes”, “urges” and “requests” that states involved in programs to reduce climate change consider the economic and social impacts of measures to mitigate climate change. It affirms that measures taken should be “based on and guided by the best available science and, as appropriate, traditional and Indigenous knowledge”.