Normalizing Catastrophe: Cancun as Laboratory of the Future 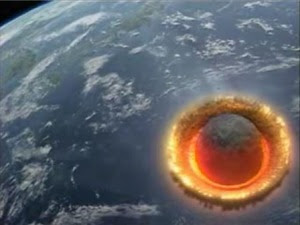 Sixty-five million years ago, an asteroid crashed into what is now the Yucatan Peninsula of Mexico and rendered extinct 70% of all life on Earth. In December of 2010 in Cancun, a mere geological stone's throw from the Chicxulub crater that ended the reign of the dinosaurs, a conclave of political and corporate leaders presided over a conference that failed to slow down the next great extinction event on this planet.

But for this geographic coincidence it's unlikely that this conference will be remembered as anything more than another tedious and predictable step towards a future of managed climate chaos and accelerated global enclosures. Cancun is most significant, though, not as the scene of a crime but as a laboratory of climate apartheid. Whatever fearsome predation the Yucatan of the late Cretaceous may have harbored, the Cancun of the early Anthropocene is the model of a naturalized social order even redder in tooth and claw. Even to use the language of "climate talks" is like speaking of the Israeli/Palestinian peace process. As linguist Noam Chomsky said years ago, the mere utterance of this phrase validates the discourse that there is such a process (as even The New York Times acknowledged on Nov. 21, 2010).

This particular conference, rightfully overshadowed by the Wikileaks saga, was both anti-climactic and anti-climatic, in the words of Laura Carlson, director of the American Policy Program in Mexico City. The Indigenous Environmental Network summed it up nicely: "The Cancun Agreements are not the result of an informed and open consensus process, but the consequence of an ongoing US diplomatic offensive of backroom deals, arm-twisting and bribery that targeted nations in opposition to the Copenhagen Accord during the months leading up to the COP-16 talks".

Hidden in the dismal wonkery of the summit, however, an important shift has taken place. The Economist of Nov 25th, 2010 pronounced the end of any effort by states to seriously seek to lower emissions. We are in a post mitigation world now, and elite effort will focus on adaptation. So far the ratio of prevention to adaptation in terms of funds spent has been about 80 to 20, and this will likely be reversed. But what kind of adaptation? Cancun in this regard is the perfect site for this conference, as it presents a vision of the future that elites are very comfortable with. Exclusion zones of concrete walled leisure, ringed by layered barricades and social apartheid. Like Dubai or Beverly Hills, its obvious who is a worker and who a consumer, and enough of the workers are security guards to ensure that "safety" and property will always be respected. Outside kilometer zero, in the city of 700,000, the highest suicide rates in Mexico. Inside the Hotel Zone, debt ridden Americans lounging on eroding beaches are convincing themselves that they're having a good time.

The elites like this model, but it's fragility is evident. Cancun itself can only take so many more category 5 hurricanes before it will be retired like Mazatlan or Atlantic City. When this happens, new frontiers of commodified leisure, whether in Colombia, Sri Lanka or Myanmar, will be developed, but even so the economic and political costs of the 2 degree Celsius average temperature rise that the world leaders have deemed acceptable are staggering.

How can we understand the utter failure of the leaders of the world's nation states, with the sole exception of Bolivia, to make even a perfunctory effort to assuage the crisis? It's certainly not climate denialism, as few if any countries are host to a political entity such as the US Republican Party. On the contrary, global elites know full well what is happening. China and many other Asian countries, where 9 of the 10 most at-risk cities are located, are run by engineers and technocrats. Can it be attributed primarily to a lack of vision - a systemic inability to look beyond electoral cycles and quarterly profit reports, something that liberal, communist and even fascist elites all seemed able to do not so many decades ago? Is it due primarily to a lack of cohesion amongst global elites resulting from the vacuum caused by the US's precipitous fall from hegemonic status? Or is it the failure of the boosters of green capitalism to pitch a plausible new bubble opportunity to global finance capital? Whatever the combination of these factors, there is a "growing acceptance", as The Economist says, "that the effort to avert serious climate change has run out of steam".

As insane as this is, it's not hard to see why Northern elites are warming to the idea of managed climate change. After all, they know that in this game of "lifeboat ethics", we're not all in the same boat. As Mike Davis has eloquently described, the existing inequalities between North and South will be exacerbated by temperature rise - and ideologically "naturalized" in the process.

The consolidation of this approach is perfectly symbolized by the city of Cancun. A concrete blight on the "Mayan Riviera", chosen by computer under the Echeverria regime that presided over the massacre of Tlatelolco plaza in 1968, Cancun boasts the most anti-democratic geography for a global summit since the WTO meeting in Qatar. Ensconced in the Moon Palace, snugly orbiting the Mexican social system, state delegates, corporate lobbyists and loyal journalists debate the finer points of carbon markets with all the gravity of North Korean TV broadcasters discussing their latest election.

The "acceptable" level of sacrifice allowed for by the Cancun agreement is breathtaking even by the standards of global capitalism. These include the predictable starvation and displacement of millions, the obliteration of entire eco-systems such as coral reefs from the planet, the desertification of the Amazon, the disappearance of the glacial fed rivers of Asia and South America, the extinction of up to 35% of global species, and the advent of the "sea of slime", to name a few. While some NGOs may say that a "lifeline" scenario for climate talks is better than a "zombie" scenario, in that, however, we are enjoined by governments, media and many environmental groups, to hail the signs of progress at Cancun, and to engage in the conceit that these summits are where serious people must come to hammer out policy. But is it really better that climate talks are now in a "lifeline" rather than "zombie" mode if questions of climate debt are off the table, the Cochabamba accords are ignored, and the collapse of biodiveristy is seen only as an "accounting" problem?

In what may ultimately be a positive sign, however, the few social movement participants who did make the journey to the gates of Cancun were not discouraged either by the tedium inside or the barricades outside. The spectacle of the expulsion from the Moon Palace of dissenting and indigenous voices, as documented by Democracy Now!, says all we need to know about the legitimacy of the conference.

Many activists were disappointed with the street level climate movement after Copenhagen, but there were no expectations for an important mobilization this time around. Instead, campaigners, many from the vibrant social movements of Mexico, understood that life, and politics, is elsewhere. Issues such as the commodification of nature, new rounds of enclosures justified by REDD, and climate apartheid are crucial, but will only truly be challenged and acted upon outside of the framework of "climate talks". The facts on the ground, and in the atmosphere and oceans, will ensure that there will be climate movements in the next century. These may not take the form that many expected before Copenhagen, but in the coming century of global warming it will be nothing if not surprising.

Eddie Yuen teaches in the Urban Studies Department at the San Francisco Art Institute. He is the co-editor, with George Katsiaficas and Daniel Burton-Rose, of Confronting Capitalism: Dispatches from a Global Movement (Soft Skull Press).
Posted by Next Year Country