Misguided optimism is a major threat to climate activism 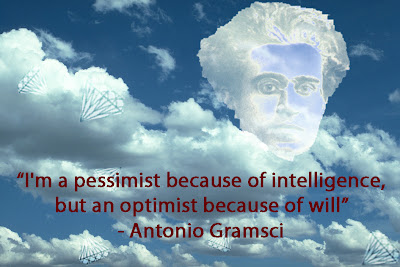 I’m quite pessimistic about the future. Some people would infer then that I won’t try to change the world, that my pessimism is a barrier to action. But this is a false contradiction. I rather follow Gramsci and ally the pessimism of the intellect with the optimism of the will.

I can understand, though, that other people are much more optimistic than me. What I find hard to understand is how so many activists are capable of recognizing the urgence and gravity of the climate crisis on one hand (assuming they do), and be optimistic about the state of climate negotiations on the other.

After the Cancun summit, groups that adopted the motto “better to have the worst agreement of all times than no agreement” are rejoicing. Greenpeace says that the “Cancun agreement builds towards a global climate deal” (link), while Tck Tck Tck, the group supported by Greenpeace, WWF and Oxfam, goes even further and says that Cancun gave a “balanced package” and saved the climate negotiations process (link). The discrepancy between what these groups say that must be done and the policies that they end up supporting couldn’t be larger. It seems as if we’re watching a Monthy Python movie and we all know how it will end.

---------------------------------------------------------
Reply Optimist
I think it’s worth to look at the Cancun outcome as a step in the right direction. Sure, if you only look at the agreement alone and wonder if it will effectively tackle climate change, the answer is no. Cancun has not closed the gigatonne gap between the emission reductions pledged by countries and what’s needed according to science, and currently we are on track for 4 degrees C global warming. Cancun also hasn’t delivered the billions of dollars we need in the newly agreed climate fund to finance adaptation and mitigation. So indeed, it’s not good enough, and I think all the groups you criticize for being to optimistic acknowledge that and say we need to do more.

But they also acknowledge that a political process that got derailed in Copenhagen is now back on track, giving negotiators a better chance to produce the fair, ambitious and binding deal we really need, i.e. doing all the extra work that definitely still needs to be done. Cancun has created a basis upon which we can built, a basis we didn’t have before and which is thus worth highlighting as a step in the right direction. That is unless you think the whole UNFCCC process is wrong and the world should deal with the challenge elsewhere. But if you agree that there is currently no convincing alternative to the UNFCCC, it would be hard to understand why you’d reject the value of this effort by 190+ nations.

I guess I have never heard about a successful pessimist movement, where masses got mobilized by pessimistic views that change wasn’t possible or never good enough. Successful movements probably need to get people excited about something, and I think that’s easier if people have a sense that change is possible and that they can contribute to it. I respect pessimism and know what it’s like, I just don’t know whether it helps. In the worst case it probably helps the oil and coal industry which benefit from and therefore like to promote a sense that the United Nations can’t come up with a response to climate change.
-------------------------------------------------------------
Reply Ricardo Sequeiros Coelho
The “Cancun agreement” is a recycled version of the Copenhagen Accord, a non-binding agreement imposed on the world by the US using bullyish tactics (I’ve written about this in the last posts). The negotiators agreed on rules to expand carbon markets but not on any binding commitment (and surely none will come out in the next years, as most developed countries are against it). So, for me, what is hard to understand is how an NGO can say that COP-15 was a disaster while COP-16 is a success.
I’m not optimistic at all on the chances of getting an agreement that is acceptable in the UNFCCC. The US is being increasingly ruled by Tea-Party fascists and has a corrupt political system that allows representatives to be bought by major companies, China is a dictatorship oriented for fast growth on the basis of slavery, India is only marginally better than China, Russia is a “quasi-dictatorship” ruled by oil lords, Canada is planning on turning its natural habitat into Mordor… etc. But this skepticism doesn’t lead to a criticism of NGOs for being present at the COPs. On the contrary, they have to be there. What it does lead is for me to look into social movements and communities around the world to look for signs of optimism, and not to international negotiations.

I can give you several examples of successful “pessimist” movements, according to the definition I’ve given in the post: Friends of the Earth, Via Campesina, Climate Justice Now!, Indigenous Environmental Network,…
Pessimism of the intellect, optimism of the will – that’s a very powerful motto, not to be seen in such black-and-white terms.
Posted by Next Year Country