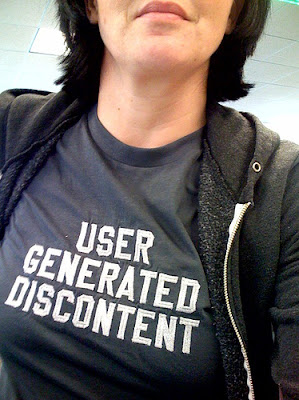 This piece continues the series being presented by Cory Morningstar and Gregory Vickrey and is part of their anticipated and controversial book and multimedia project due out in 2011.
It is safe to assume that in modern political arenas, an approach to the climate change emergency through conventional directives will not work. Indeed, across every movement, from single payer health care to American wars and occupations abroad, the conventional has failed. And while we are very skilled at making excuses and providing analysis for some aspects of that failure, we are not very good at determining other, alternative mechanisms for change. The climate change movement is no exception to this reality.

Ineffective and otherwise corrupted major political parties in the United States and elsewhere reflect the failure of the masses to control our own political will, expand the solution sets we may desire, and reconstruct the fabric of society at its foundation. Corporate control of those parties, and more directly, elections and political offices, limits our collective effectiveness on the policy-making playgrounds of Washington DC and other capitals. And again, recent history on the global and national stages shows the climate movement no less co-opted by the rapacious institute of corporate control.

Capitalism is a sacrosanct concept for most, even though the modern system of capitalism isn't pure by any means - in both positive and negative ways. Yet observing the modern capitalistic approach to the global economy through the climate lens demands we become critical of the very system that, to one degree or another, has provided for our lives of comfort in the first world. For instance, any analysis of a modern company like Nike demonstrates that both LeBron James and you and me can wear the hottest kicks as basketball season arrives, but those kicks are manufactured through the modern capitalistic directive of cheap labor - by the exploited hands of men, women, and children in southeast Asia in sweatshops and hell holes - and shipped worldwide via inefficient container ships and trucks wholly dependent upon fossil fuels.

Our shoes and sense of fashion, like nearly everything else in life, are intimately connected to the carbon economy.

Given that those in the climate change movement stand to piss off multi-national corporate conglomerates, the politicians they control, and LeBron James with any sort of meaningful approach, most have gone the way of standardized emails, sanitized campaigns, and symbolic actions.

NRDC was a lead author of the worthless bills peddled in the US Congress in 2010 that would have continued to subsidize fossil fuels and nuclear power, enriched the corporations behind their largest funders, and sacrificed future generations.

350.org wasted time, money, and activists organizing symbolic parties around the globe in the hopes that some leader somewhere would do something sometime, while selling a bunch of tshirts (guess where most are made) and propelling big oil (350 funders are dripping in it) back to the top of the greenwashing list.

The Nature Conservancy continues its close “win-win” partnership with BP.

All three, and plenty more, would like to keep us convinced that if only we green our consumptive way of life, we can keep it, with little or no sacrifice.

And that means we are wrong.

Realistically, we know at best we have until 2020 to fully enact the changes necessary to overcome the fossil fuel economy and all if its derivatives. There is nothing comfortable about that reality, but it is the only opportunity we have to stem the tide of the global climate emergency. No part of the current economic and political systems has the flexibility to bring appropriate leadership, action plans, and strength of will to the fore. To quote your favorite American Democrat, Barack Obama: “It took a hundred years for health care (d)reform.” The psychology of entrenchment alone prevents significant movement from happening within 10 years; further, the fossil fuel aspect of the economy is the engine that drives the thing, controlling or having a powerful hand in nearly every facet of life, as well as policy. Knowing that, what makes anyone one of us believe the powers-that-be will wake up early enough in the 10 year period to acknowledge the need for removal of the carbon economy and the corporations that drive it, implement that removal, and maintain civil society as it currently is all at the same time? For argument's sake, if a person is put in power to dismantle it against the will of the fossil fuel stasi, what sort of civil unrest will the fossil fuel economy create in order to stall the mechanics of change and sustain themselves?

Critical reflection should quickly allow us to answer these questions.

Manufacturing discontent is an important method for the climate movement to employ in order to implement sound reasoning for moving away from modern capitalism and its predatory effects to something of the people. It is probably the most important component, because learning the truth about corporate control of our lives inherently leads to discontent amongst all but the richest in society. In order to spread the truth, the movement must create the mechanisms to deliver it in light of the greenwashing, debtwashing, status quo delivery of commercial policy and politics. Yet the calculus for creation isn’t difficult. Most people are burdened to the point of despair by debt, disease, and disaster. The discontent rests uneasily beneath the surface.

We simply need to set it free.

It is a scary notion to think about enacting. Few things are scarier than recognizing the system that allows us our creature comforts will fail - whether we control it via transition or not. Knowing that we probably have 10 years to implement the change required is frightening. Afraid as we are, however, an alternative is coming, and the question remains as to whether or not that alternative way of life will be one we collectively design. Climate reality is forcing the decision upon us. The system is preventing any semblance of action designed to preserve life. The responsibility is ours.

Positive systemic change as a goal can profoundly effect our ability to salvage what we can under the climate emergency, and alter other despotic modern conditions besides, from resource wars to global poverty to individual health. Implementation of that change beyond the impacts of our collective dissent will require a new brand of strategy and tactics, employed under the banner of humanity.

Discontent will drive components of change from beginning to end, perpetuating failure or manufacturing success.

One significant baseline where discontent rages and appears ready to be shaped lies within the constructs of the modern financial system, and there are reasons to believe allies across the political spectrum can unite in common purpose - overwhelming the status quo. Those engaged in climate activism - and most types of activism geared towards the collective - tend to lose these potential allies from the start, typically because the issue in hand has been given false AKA’s or due to the general perception of the movement itself.

Take five minutes now to silently consider the peace movement over the last few years. Your judgment at the end of those moments will likely be sound and profound.

Now look around the globe, and observe France, Portugal, the UK, Greece...

Do you see what can be seen?

When the opportunity to do what is right presents itself, as well as the means, we need to rise up and grasp it; for when it comes, there are only two ends: prevail or fail.

Up next in the series: Streets and Policies - Actions and Enactions for Everyone, From Darfur to DC.


Gregory Vickrey is a consultant for various projects and may be reached at: gregory@gregoryvickrey.com.
Posted by Next Year Country