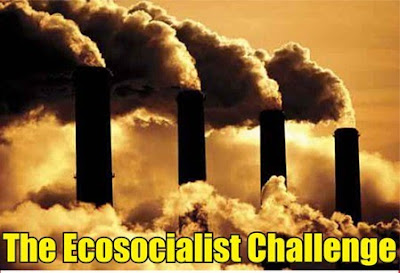 Derek Wall is an economics lecturer and writer. He has been a member of the Green Party since 1980 and was Green Party Principal Speaker from 2006 to 2007. He is a founder of the Ecosocialist International and Green Left and maintains a blog here. NLP’s Edward Lewis interviewed him about his new book, The Rise of the Green Left: Inside the Worldwide Ecosocialist Movement.
Please tell us what you mean by the term ‘ecosocialism’ and briefly sketch your vision of an ecosocialist society.
An ecosocialist society would be ecologically sustainable, socially just and democratic (which includes being economically democratic).
It’s important to have a vision. But its also important to recognise that struggle creates a different world. As Raymond Williams - who I think coined the term ‘ecosocialism’ - noted, utopias can be more compensatory than emancipatory. By this he meant that we can spend more time drawing our detailed vision of the future than working out how we get there. Frustrated by the difficulties of creating change, we can compensate by drawing a detailed map of the future we desire but find difficult to achieve.
So any vision is provisional. And, of course, my vision may be different to other people’s. But consider the following very brief sketch:

Think of a city. There could be free public transport, with cars replaced by pedestrians and cycling. There could be food grown on land that was once reserved for car parks and grown on roof tops, a massive expansion of library facilities, free community internet cafes, free community work shops so people can prosume - directly producing some of the goods they would like to consume.

All socialists these days will profess their environmental credentials, just as almost all political people do. However, assuming not all socialists are not ecosocialist, what is lacking in more conventional socialism?

As John Bellamy Foster has shown in his remarkable book Marx’s Ecology, Karl Marx was a passionate ecologist even though he did not use the word. However, much socialism in the 20th century, both social democratic and Marxist inspired, looked to smoke stack expansion of the productive forces. So the ‘eco’ prefix is important.

Socialism has had green roots but they were largely lost, and there is now a danger that the left name checks ecology without seriously considering the implications. So conventional socialism needs to be environmentally concerned and ecologically informed. Socialism also needs to be grassroots democratic and participatory, which can be seen in the 21st century socialism proclaimed in Latin America, but which is sometimes lost in other socialisms.

Environmentalists commonly argue that continuing economic growth is not sustainable. You echo this line of thought in your book when arguing for ‘prosperity without growth’. However, cannot the term ‘economic growth’ be used to denote an increase in the value of goods and services in an economy - which in itself need require increasing use of natural resouces? A more efficient use of existing materials would be a form of economic growth, on this definition - is this really something ecosocialists should be against?

One approach to an ecologically sound economy is to decouple increases in economic activity from resource use, so as to create what writers like Porritt and Hawken have described as ‘natural capitalism’. However, I am not convinced that this works because of the Jevons paradox. Jevons, a 19th century economist, argued that technological improvements tend to increase the use of resources. The paradox applies to greener forms of technology. An excellent example is car use - ‘green’ cars tend to increase pollution because any efficiency gains are outstripped by the growth of cars. If cars become, say 10% more fuel efficient, but the number of cars on the roads grows by 20%, more fuel will be used. We need more radical alternatives because relentless increases in economic growth, even if accompanied by cleaner greener ways of doing things, still tend to erode the environment.

More buses, fewer cars and more localisation so we don’t need to commute, are all rational solutions - but reduce growth as it is presently measured. Longer journeys and more cars create more economic activity in a capitalist system.

Economic growth is measured at present by an increase in output (or income or expenditure), so by definition if activity increases the economy grows. Economic ‘activity’ is not about directly meeting human needs but is something abstract, buying and selling and financial transactions are examples of such activity. So in theory there is no link between abstract economic activity and resource use. However for capitalism to expand, we have to produce and consume more; if we could do better on less, the economic system of capitalism would go into reverse.

So while in a rational system we could use fewer resources, capitalism expands when we use more. The whole world has to be shaken down for profit. Thus a rainforest is more ‘economically valuable’ if it is exploited for palm oil or bauxite than if it is conserved. Everything tends to be turned into commodities that can be bought and sold, a process which tends to degrade ecosystems.

Capitalism is based on continous expansion. Both David Harvey and Zizek have recently reminded us of Marx’s dictum that ‘Accumulate, accumulate, is the Moses and the Prophets’ for our current system.

You can square the apparent circle of ecology and prosperity but this is impossible if the economy is dependent on constant increases in economic activity . We could make goods to last for longer, leading to less ‘economic growth’ and more prosperity; equally we could make it easier to upgrade and repair goods, with less throughput and with more access to things we need. Likewise, we can increase prosperity by sharing more (libraries, a good example of the benefits of sharing, are of course are being rolled back by the present cuts).

There are many philosophical questions surrounding the value of humanity and of non-human nature. For example, are humans of greater value than other parts of nature? Does non-human nature have any kind of intrinsic value - that is, value not derived from humans? If so, does such value reside in individuals - plants and animals - or in ecosystems? I wonder what an ecosocialist response to these kinds of questions would be.

I am not an expert or a moral philosopher, but we have to value non-human life and not simply do whatever is good for humanity at the expense of the rest of nature. 90% of the time, though, the exploitation of human by human is linked to the exploitation of nature. Think of factory farming or the practices of pharmaceutical companies, where monopoly profits because of patents make the sick pay huge sums for essential drugs. While pharmaceutical companies make billions and distort health care they do so at the expense also of all the animals vivesected to maintained patented products.

Please give us a brief sketch of what the worldwide ecosocialist movement looks like today, including examples of what you find most inspiring in the movement.

Ecosocialism is strongest in Latin America. The ALBA states, such as Venezuela and Bolivia, proclaim ecosocialist sentiments loud and clear, although there is a contradiction given their dependency on fossil fuels. Social movements, in particular indigenous movements, represent the cutting edge of ecosocialism.

There are huge indigenous/social movements fighting mining projects and GM and working to redistribute land, and although these rarely use the term ecosocialist they work on ecosocialist principles of promoting equality and ecology. From the Free West Papua movement to the anti-mining struggles in India to peasants opposing land seizures in China, struggles are accelerating.

In the Phillipines on the island of Mindano, the Revolutionary Workers Party (who left the Maoist Communist Party) are an example of a militant group explicitly advocating ecosocialism, rethinking their politics in the light of climate change and other severe environmental problems

The Fourth International now calls itself ecosocialist and has sections of varying sizes across the planet. Their ideological shift has been influenced by a number of factors including interestingly the influence of the RWP. The former Fourth International leader Hugo Blanco, who led a peasant revolution in Peru in the 1960s, has also influenced them.

Hugo Blanco is significant because he is centrally involved in indigenous struggles around ecology but has an influence on non-indigenous ecosocialist movements in Europe.

There are ecosocialists in Green Parties in some parts of the world as well, such as Green Left in the UK.

There are red-green parties in many European Parties such as the Green Left in Holland, although to some extent they are more reformist than radically ecosocialist.

While they would not use the label, and are rather more anarchist, Climate Camp and other direct action movements for climate action share ecosocialist principles of opposition to capitalism and a belief in the ‘commons’.

What does effective, grassroots, ecosocialist campaigning in the UK look like?

Community action, direct action for the environment and trade union work are at the centre of this. Climate Camp and Vestas - where workers occupied the wind turbine factory on the Isle of Wight when it was closed - are excellent examples.

Ecosocialists are involved with the campaign against climate change trade union group. This has led to the One Million Green Jobs project which has gone from the grassroots to adoption by the TUC.

Solidarity with indigenous movements is important. Ecosocialists are very active in the anti-cuts movement and in student solidarity.

Ecosocialists are very active in the anti-cuts movement. For example, Green Party and Green Left member Romayne Phoenix, a former Lewisham councillor, is on the executive of the Coalition of Resistance. Many ecosocialist students are currently taking part in occupations up and down the country.

Ecosocialists also get involved in Climate Camp activities and other forms of green direct action.

What are the key obstacles that ecosocialists need to overcome - either externally or internally - in order to make further progress?

Capitalism has a strong grip. People don’t see an economic alternative, corporations gain more and more power and the ‘left’ are often on the right. But capitalism is dysfunctional. So we have to organise effectively working with a diversity of other greens and other socialists even where we have some disagreements. We have to develop strong intellectual alternatives, particularly economic alternatives, and we need to fight and win campaigns to halt the destruction of nature and the advances of neo-liberalism.

Greens are often sucked into the system, so we need to be critical of greens who don’t take the threats to our planet seriously enough; socialists too are more often absorbed by the system than able to change it. But the system no longer functions - from ecological contradictions to the insane world of speculative gambling called ‘investment banking’, its foundations are rotten.

Fundamentally, we have a choice between ‘ecosocialism or barbarism’, and only organising will steer us in the right course.
Posted by Next Year Country