OTTAWA – As world leaders and activists struggle at COP16 to come up with a meaningful action plan to deal with the climate crisis, Canadian schoolchildren are being subjected to propaganda suggesting that climate change will equal prosperity for Canada. “The rest of the world has acknowledged the terrible toll that climate change will take in terms of human lives and harm to ecosystems and biodiversity. The fact that our government is trying to teach the next generation that climate change will improve their lives is embarrassing, misleading and incredibly callous,” said Green Party Leader Elizabeth May.

Green Party Leader Elizabeth May recently took some time to write a distressing and challenging letter to Dr. Robert Page, Chair of the National Round Table on Environment and Economy (NRTEE). “It was an incredibly difficult letter to write because I truly believed in the work of the National Round Table, having been involved in its conception and having served as a member and as Vice-Chair in the past. I know it had great potential to develop innovative policy solutions on a wide range of issues. But it has now been so downgraded and debased that its work is actually harmful,” said May.

May is referring to the so-called “climate prosperity” poster released by NRTEE in conjunction with the Canadian Geographic Society and sponsored by Suncor.

“First of all we were shocked to find there is no study behind this poster and many of the references are wrong or misquoted,” said May. “These posters are being sent to our schoolchildren who may not yet have the skills to realize what it means to have information about the silver linings of climate change sponsored by Canada’s largest oil company, much less to realize the multitude of scientific errors on the poster.”

While, the NRTEE website claims that many scientists provided peer review for the poster, individual scientists were not asked to review the poster as a whole, nor did they sign off on the “don’t worry – be happy” messaging.

Climate scientist Danny Harvey of the University of Toronto has called for the poster to be withdrawn, saying it is full of bad science and misleading. He has pointed out the language of the poster seriously downplays impacts to marine life, only including a brief comment that marine life will be affected when scientists are expecting complete collapse of entire marine ecosystems. Harvey was also distressed that the poster implies that impacts of a two degree rise in global temperature will be moderate and mostly affect polar bears, when in fact scientists have predicted an extinction rate of up to 30% for all species globally.

Andrew Weaver, a leading climatologist at the University of British Columbia, was cited as a source for information that he has since called completely wrong. The poster asserts that 50% of Arctic sea ice will be gone by 2070, when in fact Weaver and other scientists predict a complete disappearance of sea ice by the end of the century and possibly sooner.

“One key fallacy in the poster is the notion that anything useful about climate change in Canada in the 21st century can be said in isolation from what will occur in the rest of the world. The implications of a destabilized climate system cannot be positive for Canada. More days of golf cannot be enjoyed if millions of environmental refugees are clamouring to be allowed entry to Canada,” said May’s letter. 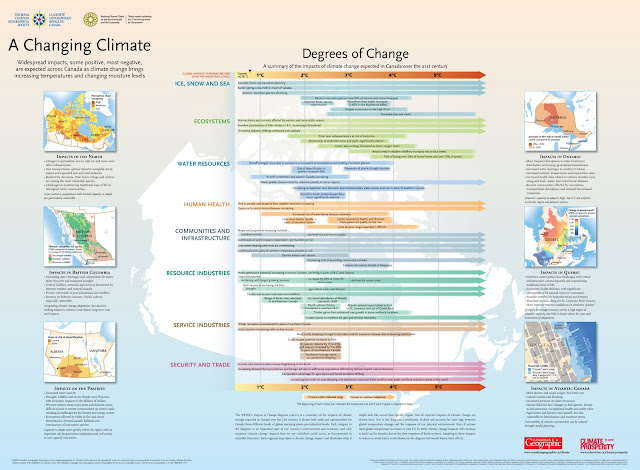